SXSW 2013: Tegan and Sara Share the Joy of Heartache in Austin - Rolling Stone
×
×

Tegan and Sara used to marvel at bands who come to Austin and do seven shows at SXSW. “We could never do that – we have too much shit,” Tegan Quin recalls thinking.

This year, however, they’re basically doing it. In addition to co-hosting the 2013 mtvU Woodie Awards, Tegan and Sara are playing six times at SXSW, promoting their new hook-heavy synth-pop makeover, Heartthrob, pounding the pavement in Austin like new artists trying to break a debut record.

“Of the three times we’ve been to SXSW, this has been the most intensive,” Tegan’s sister, Sara Quin, tells Rolling Stone.

Photos: Behind the Scenes With Tegan and Sara

But at a music conference built around industry showcases, parties and media events, the twin sisters say they’re still playing to the fans. “It feels unfair to only play one gig, because there’s no way all of our fans are going to get in,” Tegan says. “Ultimately, Sara and I, everything we do, there has to be a fan element to it.”

Packed shoulder to shoulder, thousands of revelers filled Austin’s flagship record store’s parking lot for the duo and their backing band’s 30-minute set, while throngs of shut-outs lined the sidewalks to catch a glimpse. By the time the band busted into the New-Wave-y anthem “I’m Not Your Hero,” a handful of eager fans started gate-crashing.

It was a much different scene Tuesday night, when the band took the stage just after the witching hour at what was once the famed Austin rock club Emo’s to an army of arms-folded hipsters. The difference was beyond night and day.

“I don’t wanna pile on too bad on the journalist and media contingent,” Sara says. “That is part of why we’re here, and there’s a little bit of an atmosphere of you have to come out and kind of prove yourself and win everybody over, and they’re seeing so much music they’re kind of in a comatose state . . . Certainly today was more about just getting out into the sun and having fun . . . that’s more the kind of energy we’re accustomed to.”

Jills of all trades, the sisters Quin switched between playing guitar, keyboards and vocals throughout the set, which, albeit brief, seamlessly spanned their catalog, from indie-pop a la opener “Back in Your Head,” the acoustic-driven chestnut “Walking With a Ghost,” piano ballads like “I Was a Fool” and a sampling of other Heartthrob standouts. Like noted T&S influencer Bruce Springsteen‘s Born in the U.S.A. singles “Dancing in the Dark” and “I’m Going Down,” Heartthrob gems juxtapose infectious pop tones with lyrics of lust, pining desire and post-breakup lament.

“This one’s for all the crazy ex-boyfriends and girlfriends in the audience,” one of the Quins said at Waterloo when introducing the confessional “I Couldn’t Be Your Friend.” That song dragged a little compared to the jaunty John Hughes-OST-worthy recent single “Closer,” which closed the short-but-sweet set and even had vendors clapping along. 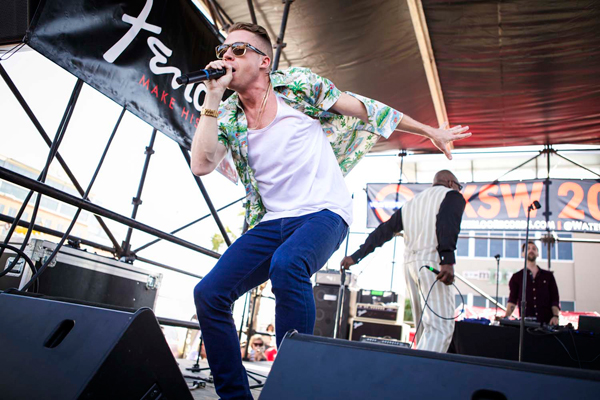 The crowd’s excitement (and size) grew even greater in anticipation of the histrionic hip-hop troupe Macklemore and Ryan Lewis. Good sight lines were few by the time the band started and, unfortunately, the audio was even worse. From the start the set was marred by sound problems. A few bars into an opening “10,000 Hours” the PA cut out completely. Comically, Macklemore continued on, excitedly performing to the sound of silence like a mime emcee before restarting, imploring the crowd to pretend that hiccup didn’t happen. But there were still problems. Mack’s rhymes – trumpet, background vocals, tracks and all – were almost inaudible over oppressively loud bass that made the whole affair sound as if it were coming from outside a car with rolled-up windows and a blaring subwoofer.

During the second song – The Heist hit “Thrift Shop” – the PA cut out . . . again. That was not “fucking awesome,” especially since this time it took 10 or so minutes to sort the sound problem out, whatever it was. Apparently to some, that was too long to wait, as the influx of youngsters who’d earlier bum-rushed the stage turned into a mass exodus. “That was, like, the worst concert I’ve ever been to in my life,” we heard one festival-goer saying as he headed for the exit. Perhaps he reconsidered when power was restored and the show resumed with the R&B gay-rights rallying call “Same Love.”