Nick Cave in the light of day is a shocking site, and the singer knows it. “We’re going to begin with a long song and hopefully by the end it’ll be dark,” the bottle-black-haired, black-clad singer quipped as he and took the stage last night at one of SXSW’s most anticipated happenings, the NPR showcase at Stubb’s BBQ. Gazing down at the audience with a death stare, the pale-skinned beanpole cued his trusty Bad Seeds into the braying and, as promised, long dirge “Higgs Boson Blues,” from the band’s post-Grinderman return to form, Push the Sky Away.

The last little sliver of sunlight didn’t hinder the imposing 55-year-old singer’s well-honed, iconic creepiness. He was hovering over the crowd like a praying mantis by the first song’s end, making gestures of controlled rage while his band swelled like a locust swarm behind him. The tune (which should be noted for its lyrics about Hannah Montana doing the African Savannah) set the tone for an unrelenting, undeniably captivating 10-song tour de force of sonic terror.

Listen to Our 2013 SXSW Playlist

“It’s dark!” Cave happily proclaimed as night finally fell. “It’s a dark song,” he said of “Jubilee,” another menacing new cut that featured dissonant fiddle work from his right-hand man, the Bad Seeds’ multi-instrumental savant, Warren Ellis. Drummer Thomas Wydler tribally matched the frontman’s mounting rage by speeding up the tempo with each of the song’s movements until it finally exploded in an ear-splitting, jaw-dropping crescendo.

Whether while playing the newer material – which, by Cave standards is relatively resolute – or Bad Seeds staples like the desert-calypso classic “Red Right Hand,” the executed-murderer’s inner monologue “The Mercy Seat” or the overtly-vulgar tongue lashing of “Stagger Lee,” Cave brought each lyrical, musical horror film to life. In the process, he probably set a record for the largest modern-day SXSW audience to go a full set without looking at their cell phones. 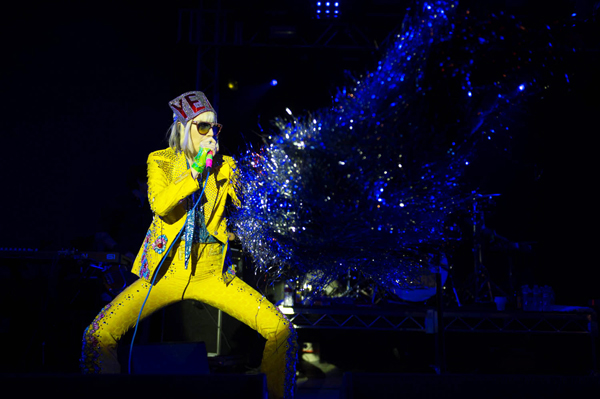 While Cave came to the stage bringing darkness, boundlessly charismatic Yeah Yeah Yeahs singer Karen O made her entrance (and quite an entrance it was) bearing light. Literally. The energetic frontwoman nearly blinded, and definitely startled, the audience when she crashed the stage looking like a boho-chic George Clinton as the spotlight hit her sparkling cape, headband and bedazzled sunglasses.

The art-punks played their second Stateside gig of 2013, turning in a 12-song set boasting three songs from the band’s forthcoming fourth LP, Mosquito, including the live debut of the its lead single, “Sacrilege.” In a well-played act of set list strategery, the song followed a brilliant, slow-burning version of the inevitable crowd-pleaser “Maps,” priming all in attendance to get down and groove to the sparse, sexy neo-disco number. That, combined with a breakneck, set-closing “Heads Will Roll,” were more than enough to forgive the band for not playing “Y Control.”

These veteran rockers proved tough acts to follow for the bill’s other two bands, Mexican genre-jumpers Café Tacuba and British chillwave troupe Alt-J. In an exceptionally odd pairing, Tacuba followed Cave with their choreographed gestures, guitar faces, smiles and overall indomitable positivity, not to mention an unforgivably long set-up time. Truly mystifying. Alt-J, on the other, played the come-down soundtrack at the end of a night chock full of staggering highs.