Kings of Leon’s Serpents and Snakes Records threw a day party showcasing the label’s roster in Austin yesterday. Naturally, that spawned rumors that the Nashville rockers would make a surprise appearance. Even the door guys at the Blackheart believed it, as did a couple hundred festivalgoers who, at party’s end, packed the house-turned-bar’s backyard in eager anticipation of a performance from the Followills. “Ridiculous!” Serpents and Snakes general manager Seth Riddle said to Rolling Stone of the rumor. Suffice to say, it didn’t happen. But fans of the Followills, and the brothers-and-cousins’ modern brand of American rock & roll, didn’t leave disappointed after a bill boasting performances from the label’s modest, hometown-heavy roster.

Nashville harum-scarum power-garage stoner-punk quartet Turbo Fruits opted to road test new songs for the curious crowd at the showcase, presented by AllSaints. “South-by seems to be about ‘showcasing new music,’ so it’s a good opportunity for us to try to showcase the new tunes and see what flies and what sinks,” Turbo Fruits bassist Dave McCowen told Rolling Stone after the gig, explaining how the band uses crowds at SXSW (where in 2011 they played a near-record-making 17 showcases) as a barometer when deciding on songs for their next record.

The crowd at the Blackheart more than approved of Jonas Stein’s acrobatics. By set’s end, the singer (formerly of Be Your Own Pet) was hanging upside down by his legs from a beam above the stage. 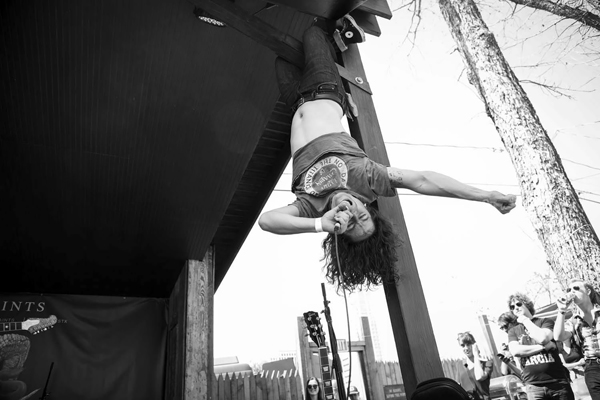 Veteran Nashville-rock luminaries the Features – who Kings of Leon have championed for the better part of a decade, and who the Followills initially founded Serpents and Snakes for the sole purpose of signing – also heavily-peppered their show-closing set with new songs, including the bouncy, New Wave-y earworm “This Disorder,” which the band dropped on Rolling Stone in February. The Features also honored a request or two by a superfan who’d traveled from Guadalajara, Mexico, where the band opened for KOL in 2009.

Fresh-faced Nashville-by-way-of-Mississippi quintet the Weeks, at the moment the most buzzed about band on the label, had prime billing and capitalized on it with a raucous, youthfully-spirited set of raw rock & roll that played perfectly into the Blackheart’s backyard-keg-party-vibe. More than any other band on Serpents and Snakes, the Weeks nervy, careening jangle and scraggily, Southern-stoner look immediately bring to mind Youth and Young Manhood-era Kings of Leon comparisons. Also, singer Cyle Barnes and drummer Cain Barnes are identical twins.

Though the band shares such similarities with their label heads, they bring plenty of their own attributes to the table, especially in ace organist Alex Admiral Collier, who ties the band’s brilliant shambles together with his full-bodied swells and sweeping glisses. And though Cyle Barnes takes a vocal cue or two from Caleb Followill, he has own style as a frontman, stalking the stage hunched over like a long-haired beat poet looking for a lost contact lens. Barnes finished the set singing while crowd surfing. Can you imagine Caleb Followill doing that?