In his recent Rolling Stone interview about addiction, meltdown and hard-won recovery, Green Day singer-guitarist Billie Joe Armstrong recalled a show in Austin, Texas in the late Nineties when he decided to stop worrying about his punk credibility and finally act like a rock & roll star onstage: to give his band and songs the showmanship they deserved in concert. It took liquid courage, he admitted – a step with distant, ultimately disastrous consequences. On March 15th, a newly sober, supercharged Armstrong was back in Austin with bassist Mike Dirnt and drummer Tré Cool for a special SXSW appearance at the Moody Theater – a show that started with Armstrong bolting across the stage as if shot from a cannon, into the incendiary challenge of “99 Revolutions,” then demanding that his audience respond in kind. “This is not a fucking party, this is not a first date, it’s not a bar mitzvah – it’s a celebration!” Armstrong yelled soon after, during an extended instrumental breakdown in “Letterbomb,” accenting his impatience with rock-god action and comic relief: punctuating Cool’s explosive downbeats with Pete Townshend-style leaps from a riser; playing part of his guitar solo in “Know Your Enemy” perched on one leg as if he’d suddenly become a member of Jethro Tull.

But there was no missing the gratitude in that agitation, in those antics. “Ah, welcome back,” Armstrong said in a deep, exhaling voice, at one point during the Big Country-style bagpipe-guitar charge of “Stay the Night.” He was addressing the loving, frenzied crowd, mostly comprised of local fans and ticket-lottery winners. He could have just as easily been talking to himself.

Green Day were at SXSW – with guitarist Jason White, in sextet formation – to promote two documentaries that premiered at the festival earlier that day: Cuatro!, about the making of the group’s recent trilogy of LPs, ¡Uno!, ¡Dos! and ¡Tré!; and Broadway Idiot, which follows the musical-theater production of the 2004 album, American Idiot. The band also had a point to prove at this media-saturated festival, after Armstrong’s physical and emotional collapse onstage last fall at the I Heart Radio festival in Las Vegas: that Green Day still have a career and their frontman is healthy and energized. 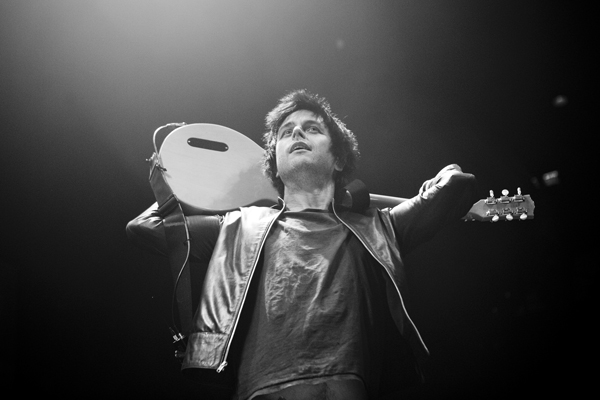 They did that by opening and closing with a focus on songs from those three albums, which suffered from the loss of touring and promo during Armstrong’s rehab. “Brutal Love,” from ¡Tré!, was a surprising, effective final encore, minus the strings on the record but with a compensating pathos in the guitars and Armstrong’s wrenched vocal.  “Stop When the Red Lights Flash,” from ¡Dos!, was great hard-fuzz candy, played at avenging speed with a sweetly nagging chorus (“I’ll make you surrender” – and you do).

The center of the show was loaded with hits that now double as allusions to peril and Armstrong’s passage out of crisis, such as “Burnout” and “Basket Case” from 1994’s Dookie. It was hard not to miss the fiction made real in “St. Jimmy” from American Idiot – and the extra irony in Armstrong’s spell on Broadway playing the goth-imp dealer. And it was surely no accident that one of the cover fragments in the wind-out from “Coming Clean” was AC/DC’s “Highway to Hell.”

Another new song, “X-Kid,” came next to last in the set. As Armstrong noted in the Rolling Stone interview, it is about someone who was very close to the band: an old punk comrade who never figured out how to grow old with the ideals forged in outlaw youth and died of the same bad habits that triggered Armstrong’s crisis. But Green Day closed with a reliable, affirming antidote, “Minority,” from 2000’s Warning. The song has been a featured climax of the band’s shows for years. There was something new, though – invigorating and determined – in the band’s crisp strut and the way Armstrong sang the pride and refusal in the title lyric.

His healing and vigilance have just begun. But just seven months after he fell, spectacularly, into classic rock-star darkness, Armstrong is back onstage with the band that has been his life since he was a teenager – eager to prove that he still belongs there and will never take it for granted again.