As an Austinite, Britt Daniel is no stranger to SXSW homecomings: his band Spoon has played more than one high-profile showcase during the annual music festival in the Texas capital. Last night, Daniel put a different spin on the local-hero angle, helping to close out the first night of SXSW with his other band, Divine Fits.

Daniel mostly played bass, and Boeckner mostly played guitar, though they switched on a few songs, including “Would That Not Be Nice,” as they traded off on lead vocals. Brown anchored “Baby Get Worse” with a booming beat, and Fischel set the tone for “My Love Is Real” with dark, gleaming synths. Daniel, wearing a JEFF the Brotherhood T-shirt under a black blazer, propelled “Flaggin’ a Ride” with a relentless bassline, while Boeckner played trebly guitar on a new song whose name they didn’t mention.
Although Divine Fits have worked a broad range of covers into their live sets over the past six months, they only had time for a couple, including a version of Tom Petty’s “You Got Lucky” that had the crowd singing along with the refrain. They ended their set with another cover, from their album: Nick Cave’s song “Shivers,” which Daniel sang while Boeckner on guitar and Fischel on bass faced off at center stage. 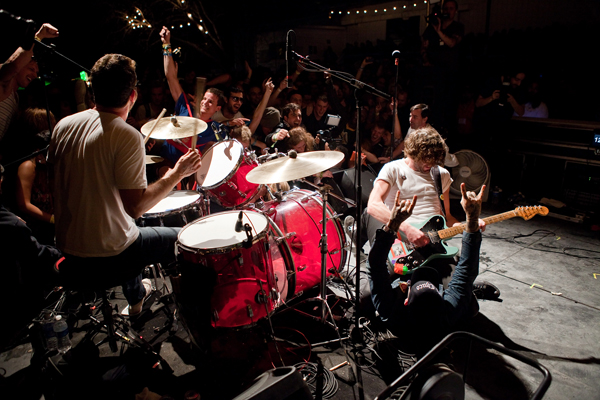 Before Divine Fits, Japandroids delivered a set of high-octane rock & roll that was frustratingly hard to hear any further than a few rows back. The Vancouver, British Columbia, due of Brian King and David Prowse brought a surging sense of power to a performance packed with bristling guitars and massive drums on songs that mostly came from last year’s Celebration Rock LP. The pair’s music is full of sing-along moments, and the crowd obliged, bellowing with the whoa-oh chorus from “Fire’s Highway” and accompanying “The House That Heaven Built” with a thicket of upraised hands.

Hands were upraised during Wavves’ set, too, though that had a lot to do with holding aloft audience members who were crowd surfing while the southern California group charged through a set of loose and elemental garage-rock tunes. Though singer Nate Williams’ vocals were mostly lost in the band’s churning, a propulsive bassline pushed “Linus Spacehead” as people near the front of the stage flung water (or beer) on each other. Wavves also dipped into their forthcoming album, Afraid of Heights, with songs including the volatile rocker “Beat Me Up.”