Countless tributes to Kurt Cobain have been staged since the Nirvana deity’s death 18 years ago. But few have likely been as unusual as “Kurt,” a multimedia show held at Miami’s Gusman Center for the Arts in conjunction with Art Basel Miami Beach Thursday night.

For one thing, “Kurt,” conceived by artist Adarsha Benjamin (whose short film starring actor Henry Hopper as Cobain screened during the program) did not include any music by Nirvana. Instead, sounds inspired by Cobain were provided by Thurston Moore and Guy Blakeslee of Los Angeles band the Entrance.

Benjamin’s film juxtaposes 16mm footage of Cobain’s hometown, Aberdeen, Washington, with surreal scenes of Hopper as Cobain. Appropriately given the Gusman Center’s history as a former silent movie palace, the short was wordless, with the exception of a reading of the lyrics to Nirvana’s “Smells Like Teen Spirit” by Hopper. (“It’s about the unspoken,” Benjamin explained before the show).

The evening’s strangest component was a modern dance interpretation of the “Smells Like Teen Spirit” video by choreographer Ryan Heffington. If not for the flannel shirts and grunge-era haircuts of the dancers, one might have mistaken the performance – with its zombie-like movements and creepy soundtrack – not as a tribute to “Smells Like Teen Spirit” but its greatest-video-of-all-time rival, Michael Jackson’s “Thriller.” 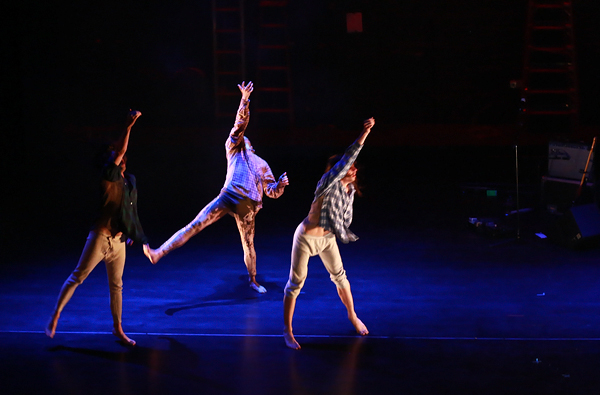 Moore, who lived in the Miami area until the age of 10, spent a good 20 minutes regaling the audience with stories of his youth in nearby Coral Gables before beginning his set. It turns out that Moore’s mother had seen Gone With the Wind at this very theater – once Miami’s premier entertainment venue – in the Forties, and it was a transformational experience on the future Sonic Youth matriarch, who defied a Catholic church edict to see it.

Sonic Youth were a major influence on Nirvana, and Cobain, with whom Moore became friends in the Nineties, in turn provided indirect inspiration for the song “Psychic Hearts,” from Moore’s 1995 solo album of the same name. More specifically, Moore said, the song “was inspired by interactions I had with the community around him and his scene in the Pacific Northwest, and friends I had within that . . . The Psychic Hearts album was thematic around it.” That was the only song performed by Moore, whose set otherwise consisted of a 20-minute noise/free jazz improvisational session with a drummer and the reading of several poems. The last of these ended with the words “Be a warrior . . . love life.”