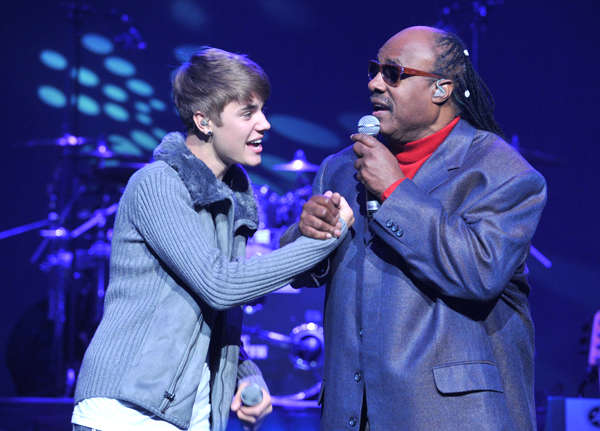 Stevie Wonder’s annual House Full of Toys benefit was filled to bursting Saturday night at the Nokia Theatre in Los Angeles, where the R&B legend led an expansive cast – including Justin Bieber and Drake – through a four-hour marathon designed to raise money for families in need this holiday season. At 11 p.m. Wonder told the crowd that the venue had a union-imposed curfew of 11:30. He then offered to pay the overtime himself, making room for a brief headlining set packed with hits like “Higher Ground,” “Sir Duke” and “What Christmas Means to Me.” (He also did the trippy title track from his most recent studio album, 2005’s A Time to Love, soliciting help from a children’s choir and several pint-sized percussionists.)

For all his enthusiasm, Wonder actually seemed to get a bigger kick out of bringing his pals to the Nokia’s stage. He and Steve Harvey, the concert’s host, practically got into a shouting match when each man tried to be the one to introduce Bieber. The teen idol’s appearance (in a totally darling fur-lined cardigan) triggered the usual hysteria – particularly during an acoustic rendition of “Baby,” which filled out a performance stocked with tunes from Bieber’s recent Christmas album, Under the Mistletoe. “How many people in here are excited?” the singer asked after a duet with Wonder on “Someday at Christmas,” and you had to wonder if he was flexing a newly discovered sense of sarcasm.

Later, Drake showed up long enough to rip through “Headlines” and “Best I Ever Had” (the latter featuring a funky reggae breakdown), and to reveal that he and Bieber are due to start work next month on Bieber’s next record. Then the rapper was gone, replaced onstage by Michael McDonald, whose lion-in-winter croon sounded as great as ever in “What a Fool Believes” and “Takin’ It to the Streets.”

Faith Evans, Charlie Wilson and Little Anthony and the Imperials also performed Saturday, along with a generous handful of lower-wattage acts that gave the evening something of a Showtime at the Apollo vibe. (Here’s looking at you, Treasure Davis.) Even in its longueurs, though, House Full of Toys appeared to provide Wonder with at least as much cheer as he was intent on distributing. It brought joy to his world.