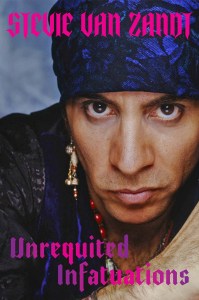 “I’ve seen enough things that could be useful that justified writing them down and sharing them,” Van Zandt said in a statement. “As far as my life story? Well I hope this book explains it to me!”

The book’s publisher, Mary Ann Naples, added: “Stevie Van Zandt’s story is a singular arc in American culture. From his vantage point as a witness to the renaissance era of rock & roll to consequential activism and a third act in groundbreaking television, Hachette Books is proud to bring Van Zandt’s odyssey to readers.”

Unrequited Infatuations is available to preorder and will be published in hardcover, e-book, and as an audiobook.