“I was born in Staten Island,” Christina Aguilera said at the top of the broadcast. Most of the hosts and performers crammed into the benefit show Hurricane Sandy: Coming Together have direct connections to the Eastern Seaboard cities and towns affected by last week’s colossal storm. Billy Joel lives on Long Island. Newsman Brian Williams and faux newsman Jon Stewart both roamed the Jersey shoreline in their youth, as did Jon Bon Jovi and that other fairly well-known Jersey rocker who closed the hour.

In the YouTube era, the all-star disaster relief program remains a specialty of the old television networks. On Friday, a lineup of seasoned veterans pulled songs from their catalogs that sometimes seemed written for the occasion. Upper West Side resident Sting played a jazzy acoustic version of the Police’s “Message in a Bottle,” while Joel dusted off “Miami 2017 (Seen the Lights Go Out on Broadway),” a song dating back to 1976 that opens with some prophetic description of an apocalyptic New York.

Perhaps strangest, and most moving, of all was the supergroup rendition of the Drifters’ doo-wop classic “Under the Boardwalk,” introduced by Jimmy Fallon as a tribute to the ravaged New Jersey coast. With Joel singing the bass notes and Bruce Springsteen and Steven Tyler, among others, crowded around microphones, the comic talk-show host took the lead vocal – not impersonating Neil Young, but as himself.

Jon Stewart, too, played it straight, for the most part. With just a spare studio audience on hand to lend the event added solemnity, the comedian noted that when it comes to natural disasters, “you never think it’s going to be your home or where you grew up.” Texting a $10 contribution might mean getting someone in need a meal or a warm blanket, he said, or maybe enough to “send a message to the mayor that maybe the marathon isn’t a great idea.”

But for all the celebrity pleas, the really effective bits were the film clips of devastated areas, and people. “I want to go home,” one Staten Islander sobbed, “but there’s no home!” When Steven Tyler went after the distressed high notes at the end of Aerosmith’s pared-down version of “Dream On,” it was the sound of someone finding what’s left of their home in a marsh hundreds of yards from its foundation.

A few simple numbers told the story of Sandy’s destruction: 88 deaths. An estimated $50 billion in damages. One hundred homes in the Queens neighborhood of Belle Harbor burned to the ground. Twenty-four foot waves in the Great Lakes.

There was strength in numbers when Stewart and Williams, “two Jersey boys,” called for a third, or better yet 12 more, to close the show. Maybe you’ve heard that Springsteen is New Jersey’s favorite son. Resolute as ever, he led the E Street Band on the gospel-y anthem “Land of Hope and Dreams,” which has become the rock & roll ambassador’s default tune for the dispossessed. It ended as it always does, with an interpolation of Curtis Mayfield’s “People Get Ready.” There’s a train a-coming. It just might be a few days, until they get the tunnels dewatered. 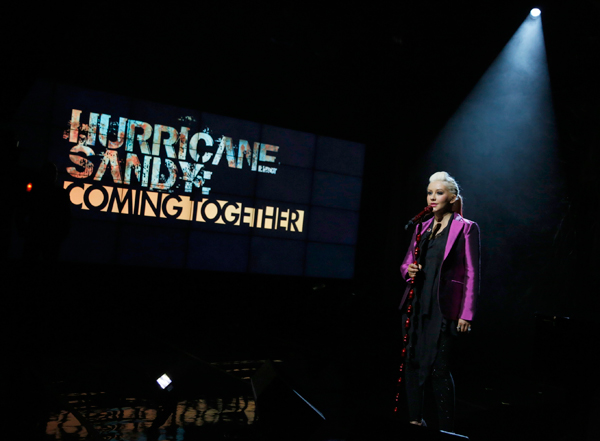