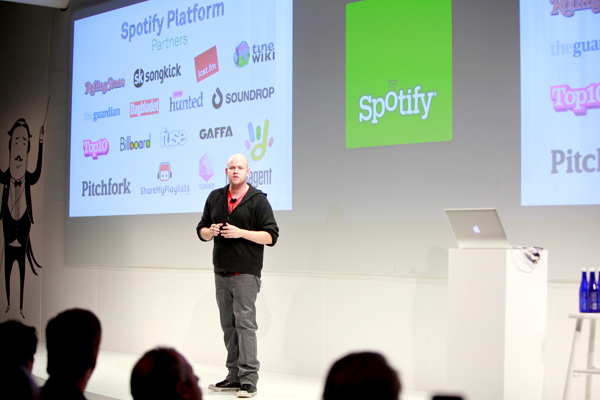 Spotify today announced the launch of a platform for third-party apps, allowing outside developers to build a host of new social features into the fast-growing digital music service.

Sixteen first-generation apps from Spotify’s new brand partners, including Rolling Stone, will be available in the platform’s initial launch phase. The Rolling Stone Recommends app will function as a discovery tool for Spotify users to browse album and song reviews, as well as curated playlists, while simultaneously streaming the music. A Songkick app will help users track their favorite bands’ upcoming concerts, while TuneWiki’s app will encourage sing-along streaming by displaying the lyrics of each track as it’s played.

“We’re opening up our platform in a way that lets you curate the apps you want and really make Spotify yours,” said founder Daniel Ek, who unveiled the new Spotify Platform at a press conference in New York. “There’s really all kinds of great apps and places to go to for the latest music online, but the irony is you actually find very little music on them. Today, Spotify brings music to the party.”

“We think Spotify is like the ultimate jukebox,” said Rolling Stone founder, editor and publisher Jann Wenner, who joined Ek onstage for the unveiling. “Everytime you open your desktop, you have the history of recorded music staring at you in the face. For us at Rolling Stone, Spotify presents an excellent opportunity to integrate music into our magazine and website…and to be with music fans wherever they are engaged.”

“As somebody who used to take Rolling Stone’s year-end issue into Amoeba Records and go shopping with it, it’s great to know that with Spotify, we can instantaneously get that out to people and have them listening to what we’re picking right now”,’ added Bill Crandall, head of digital content.

Since Spotify’s U.S. launch in July, the service has signed on 10 million users, 7 million of which have joined the service since its integration with Facebook in September. Over 500 million playlists have been created by users.