When was the last time a mere music distribution service — think iTunes, Best Buy and Tower Records — asked its customers to get political? That’s what Spotify is doing this week in sending users notifications and custom, state-specific playlists asking them to vote in the U.S. midterms.

On Tuesday, a week ahead of the midterm elections on November 6th, the music-streaming giant began emailing all voting-eligible Spotify users over the age of 18 with messages encouraging them to go out and vote. Each email links to a playlist made for the user’s state or territory, highlighting music that’s “uniquely popular there,” as well as a local polling locator. It also plans to email users again on Election Day as a reminder. “Spotify is leveraging its massive reach and presence in its listeners’ lives to send users custom notifications,” a press release stated about the initiatives. 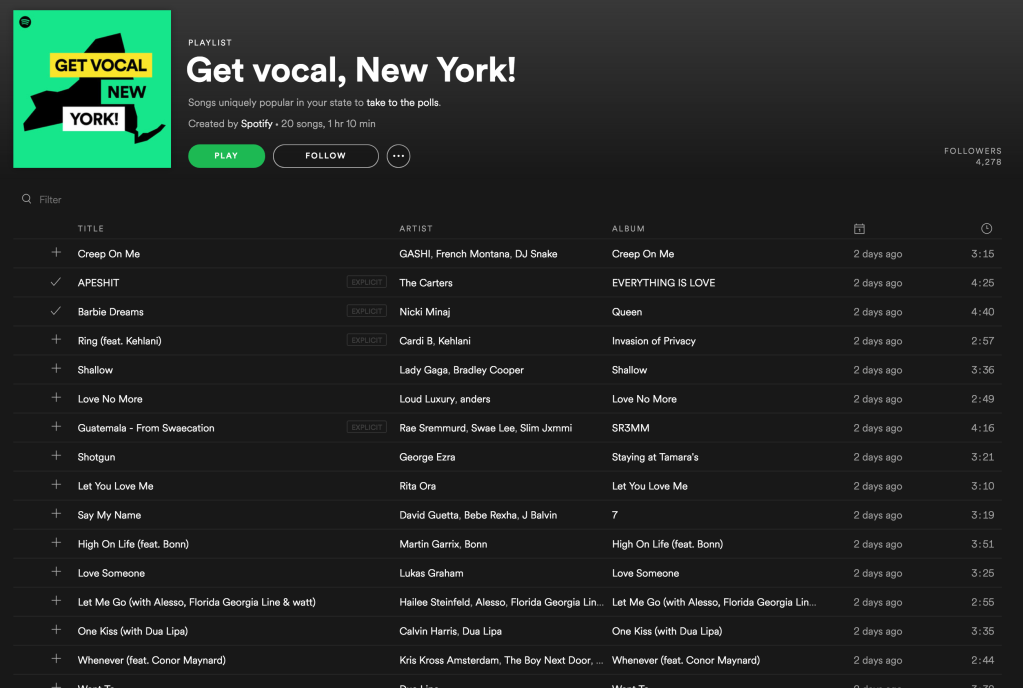 “Leveraging” is right: With 180 million users, a large swath of whom are in the ever-crucial 18- to 34-year-old demographic, Spotify has a big microphone; its position as the growth leader of the music industry right now gives it further influence and visibility. These vote-urging messages come at a time when many big musicians — and celebrities at large — are being called upon to use their platforms to spread activism or at least awareness. Taylor Swift, for instance, was criticized for years for not having enough of a political stance before she finally made an Instagram post endorsing a pair of Tennessee Democrats earlier this month.

'Everybody's in Revolt': How One Radio Station Fought iHeartMedia Cuts -- and Won

But putting aside the question of whether or not artists need to engage with national and regional affairs, Spotify’s decision to keep stepping far out of its role as a content distributor is significant on its own. The service caught flack earlier this year when it compiled a moral code of conduct for the artists it promotes on playlists; Spotify ended up walking that policy back, yet the underlying message — that the service views itself as having social responsibility to music fans, which is an idea the old music-industry regime of labels and publishers never contended with — was clearly established.

In the case of this voting push, the company is playing it safe: It only asks users to go and participate, but not in any specific manner. (The connections between the songs on each state playlist and civic engagement – Calvin Harris’ “One Kiss,” Nicki Minaj’s “Barbie Dreams” – are also tenuous.) Spotify is so far the only music-streaming service that’s walked so obviously into politics, but others like Apple Music have tiptoed in by featuring figures like Hillary Clinton in content offerings. It’s likely we’ll see more as the sure-to-be-vicious 2020 elections loom closer.

At heart, this is the same internal struggle that other media-tech platforms like Facebook and Google are facing: While engagement with political matters used to be taboo, it might now be verging on necessity.