On the near-anniversary of its first quarterly earnings report as a public company in 2018, Spotify has good news to share. In its earnings report for the first quarter of 2019 Monday, the company said that it reached 217 million monthly active users around the world — 100 million of whom are paying for the premium subscription tier.

Those numbers are a relief for investors as well as music-industry executives who’d doubted that Spotify could significantly increase consumer interest in its $9.99/month premium tier; its free ad-supported tier, they worried, would deter growth in the more money-making subscription arena.

Spotify has gone to great lengths over the past year to ramp up both its premium tier and overall popularity. Among a myriad of expansion efforts, the Swedish music-streaming service has teamed up with Samsung, the biggest smartphone maker in the world; launched in India with a budding user base of around 2 million there; and amplified its partnership with Hulu to offer free video-streaming from the service to all Spotify Premium users. Its new 100 million figure far outpaces Apple Music’s reported 50 million paying subscribers.

Spotify also spent a significant portion of its earnings report discussing its podcasting ambitions, noting it’s working on a new podcast advertising model. While still unprofitable because of the high royalty rates it pays out to rights-holders, Spotify lost €142 million ($160 million) in Q1 2019 as opposed to €169 million ($190 million) in Q1 2018. It expects to end the year with between 222 million and 228 million total users, 107 million to 110 million of them on the premium tier. 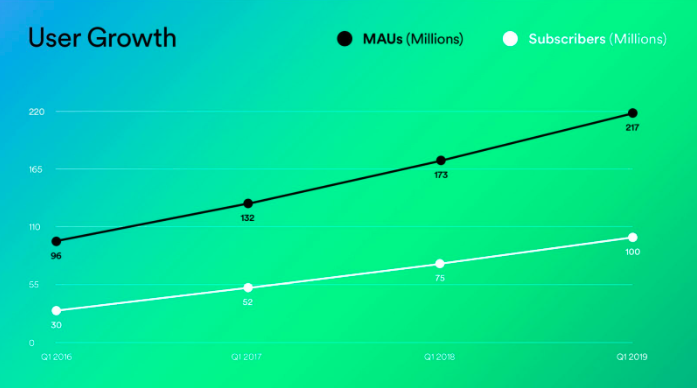