Just before his band’s encore at London’s Royal Albert Hall on September 30th, singer Tony Hadley of New Romantic survivors Spandau Ballet told a story about seeing his vocal hero, Frank Sinatra, at this opulent Victorian theater in the late Seventies and actually meeting the Chairman of the Board backstage. “What do you do, son?” Sinatra asked Hadley. “I’m a singer in a band, and someday I am going to play here,” the younger man replied. He did – six years later, when Spandau Ballet’s tiptoe-R&B ballad “True” was Number One in Britain and a lot of other countries.

The group – Hadley, guitarist-saxophonist Steve Norman, drummer John Keeble, songwriter-guitarist Gary Kemp, and bassist Martin Kemp, Gary’s younger brother – were back at the Albert Hall to host what was surely the biggest home-movie party in British pop history: the sold-out national premiere of Soul Boys of the Western World, a documentary of Spandau’s origins, formation and rise, their near-two-decade split and, in 2009, reunion. The film, directed by George Hencken and first shown at SXSW last spring, was followed by a brief Q&A with Hencken and the band and a six-song live performance – all simulcast in cinemas across Britain and in Ireland.

A Life in Pictures

Soul Boys of the Western World aspires to be more than a typical rock doc, and at times it gets there – ditching voice-of-God narration for the band members’ own plain-spoken commentary; placing the dress-up confrontation and disco affection of early-Eighties underground Britain against the draconian grip of Thatcherite rule. The pre-hitsville footage is perfectly raw and jittery – super-8 reels of Spandau as teenage wannabes, working-class glam kids performing for family and school friends; then at play and on display with the small, early corps of Blitz kids in 1978-79, a cozy London Weimar Republic of soft-core decadence.

In one sequence, Spandau Ballet are shown in their live New York debut: in May, 1981 at a club called the Underground. I was there, covering Spandau Ballet for their first story in Rolling Stone. The venue was new but less than romantic – a midtown basement. But the group worked the small stage like a catwalk with a small, potent set list drawn from their first album, Journeys to Glory, and much closer in its crisp tension and funk momentum to the Chic-meets-Sex Pistols ideal of hairspray brethren Duran Duran. Someone – most likely their manager and Soul Boys producer Steve Dagger – had the prescience to film the moment.

But that faith – that Spandau Ballet were destined for more than the dole, as Hadley reiterated in the shiny 1983 gallop “Gold” (“You’re indestructible/Always believing/You are gold”) – is the straight-line theme running through Soul Boys. The middle third of the movie is all good times and smiles: boyhood friends running across beaches and through champagne like a Rat Pack in Cossack boots and feathered berets. 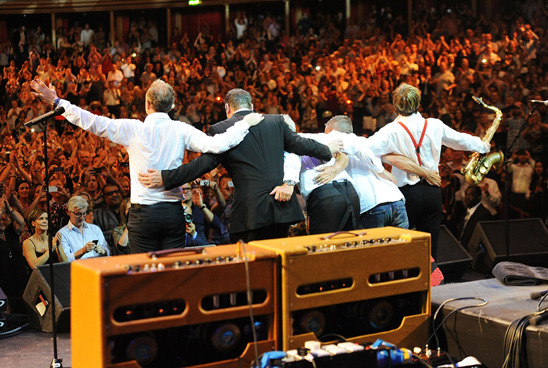 That much fun can’t go on indefinitely. Still, the breakup in 1990 – a combined product of exhaustion, mounting tensions over Gary’s control of the writing and the Kemps’ defection to acting – is not milked for extra tears. Even after Hadley, Keeble and Norman sued Gary in the Nineties for royalties and lost, it was Gary who largely initiated the 2009 reunion. Memo to the Smiths: There are no bridges so badly burnt that they can’t be rebuilt, if you really want it.

Jumping Down From the Screen

In the Q&A, the greatest revelation was no surprise – gratitude. When Hadley and Norman repeatedly expressed their thanks for Spandau Ballet’s first-life success and ongoing second chance, they were talking to the audiences in those movie houses, not just the privileged in the Albert Hall. But the film and interview inevitably felt like a long, necessary prelude to the gig, which – short as it was, at just six songs – affirmed the group’s continuing arena-dimension appeal: Norman’s metallic power chords and punctuative swipes of guitar across the funk in “To Cut a Long Story Short,” the group’s 1980 breakthrough single; Hadley’s long, high notes, notched with quiver, in the hurtling pop of ’84’s “Only When You Leave.” When Norman stepped up front to blow his scripted sax break in “True,” the crowd – which took over the chorus from Hadley and no doubt sang it in pubs up and down these isles in ’83 – received it with the kind of shouts and applause New Yorkers always gave Clarence Clemons when he took his thundering-tenor spotlight in Madison Square Garden for Bruce Springsteen’s “Jungleland.” The ecstasy in the Albert Hall was that kind of loud.

Spandau Ballet have recorded three new tracks for the movie’s soundtrack with producer Trevor Horn. They didn’t play them tonight. But in one song, “Soul Boy,” the adult Hadley sings, “We had it all/Or so it seems,” as a sample of the young Gary repeats his boast in the film: “We consider ourselves the most modern thinkers and dressers in London.” They were also five of the luckiest best friends in pop. They still are.