When Major Lazer came out tossing vuvuzelas, you knew they meant business. Dull plastic toots bounced off the warehouse walls as hypeman Walshy Fire, DJ Jillionaire and Diplo himself emerged, the latter two clad in suit and tie. Over the next hour, the group spun a tight, twisted set at Viceland’s SXSW headquarters, with Diplo even tumbling out into the crowd, Wayne Coyne-as-Bubble Boy style. It was a fitting, raving open for the night’s main event: a live performance from Snoop Dogg‘s reggae reincarnation, Snoop Lion.

A performance from the rapper-turned-Rasta was enough to stoke anticipation, but Major Lazer made certain the packed crowd was sufficiently geeked. Their electro-dancehall specialty made up the set’s foundation, and Jillionaire and Diplo spotlighted several new tracks from their forthcoming Free the Universe (out April 15th), including a premiere of “Get Free,” complete with a cameo from Dirty Projectors’ Amber Coffman. Amidst grinding synth and bass bomb drops, the duo sprinkled in hip-hop crowd pleasers like Juicy J’s “Bandz a Make Her Dance” and deep cuts such as Beanie Man’s “Girls Dem Sugar.”

The accompanying stage show was fittingly, well, bananas. Dancers, confetti, an inflatable version of the Major Lazer cartoon: at one point Diplo even halted the show to point out not everyone had obeyed Walshy Fire’s order: “If you’re a real Major Lazer fan, take your shirt off!” Outlandish and indulgent? Sure. But as Major Lazer commanded the crowd to get low – which they gladly did – it became clear that some things in music haven’t changed since the Isley Brothers instructed everyone to get a little bit softer now.

Up next was Kingston, Jamaica’s Movado, a dancehall MC with a thick, punchy delivery that lagged behind the beats early on, while hook attempts fell a little flat. But atop a beat with a low, menacing horn riff, Movado found his comfort zone. Packed with all sorts of energy and towel-waving, Movado closed his set to cheers with spot-on rhymes that fell easily between big downbeats. 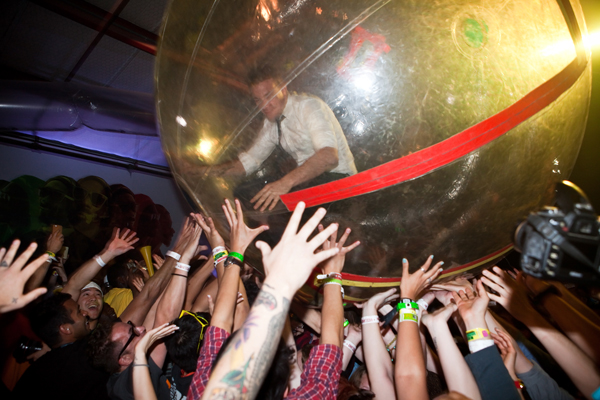 Then came the waiting game. With each new person cramming into the venue over the next half hour, the audience lost a bit more patience waiting for Snoop Lion to arrive. At one point, boos erupted, and when the reincarnated one finally took the stage to chest-caving snare hits, his voice sounded disconcertingly husked and tired.

That didn’t last long, though. Moments later, as the beat dropped, the famed MC fell right into the zone he’s inhabited over the course of his 20-year career. The night’s purpose was to celebrate the emergence of Snoop Lion, reggae star, but that did not mean Snoop Dogg, hip-hop hero, was absent.

“Gimme some of my favorite drink, but with a little twist on it,” Snoop quipped with a sly smirk as a beat built on reggae guitars and a grimy synth riff reminiscent of his Death Row days poured out of the speakers. A dubbed-up version of his classic “Gin and Juice” followed. For each new cut, including the blissed out “La La La” and a striving, euphoric track featuring Angela Hunte (a rising Brooklyn MC who showcased her quick tongue and pipes at the top of the show), Snoop breezed through old favorites like “Next Episode” and “Drop It Like It’s Hot.” The MC even tossed in a few sing-alongs on his favorite tracks for good measure, including Bob Marley‘s “Could You Be Loved,” House of Pain’s “Jump Around” and Joan Jett‘s “I Love Rock ‘n’ Roll.”

Not a dull moment throughout Snoop’s 80-minute set. While the mood mellowed after a performance of Reincarnated‘s latest single, the somber “No Guns Allowed,” Snoop Dogg/Lion led the crowd in a reviving rendition of “Young, Wild & Free.” The refrain was sung into oblivion, yet it never lost its simple joy. Twenty years on the job, it doesn’t matter if he’s Lion or Dogg – Snoop knows how to give great music to the masses.