Smiths Photographer on Witnessing Band at Their Peak - Rolling Stone
×

Nalinee Darmrong was a teenager living in Washington, D.C., in 1984, when a friend gave her a cassette tape containing the music of a then-emerging British band called the Smiths. About a year later, she went to see the Smiths perform in D.C. during the Meat Is Murder tour, and the next morning, after waiting outside their hotel for autographs, Darmrong and her friends met the band. That marked the beginning of Darmrong’s friendship with the Smiths and a two-year odyssey during which she followed and photographed them during the subsequent touring for Meat Is Murder and The Queen Is Dead. “Traveling home, I remember feeling so incredibly lucky and grateful and also dumbstruck by how magical the last year had been for me,” she wrote later. “I feel that sentiment even more strongly today, and will never have any regrets, deciding to boldly go where I had never gone before.”

Three decades later, Darmrong has assembled the photos she took of the now-legendary group – a majority of them unpublished – in The Smiths, a new book published by Rizzoli. In addition to the mostly black-and-white images capturing the band onstage and in candid moments, the book also contains pictures of memorabilia that Darmrong collected from the period – such as tickets, set lists, and a paisley shirt that Morrissey wore during a show.

Flashback: The Smiths Play an Epic Version of 'How Soon Is Now?'

In an recent interview with Rolling Stone, Darmrong, now a freelance house photographer for D.C.’s 9:30 Club, reflected on what it was like to unearth these photos after 30 years, and her time with the Manchester legends.

Why did you gravitate towards the Smiths’ music after you got that mixtape from your friend back in 1984?
I’ve always been into alternative music. I love all music, but I always keep an ear out for music that’s just a little bit different, that has a little quirkiness to it, no matter what decibel range it is. When I first heard the compilation tape, I knew they were different, especially with the music going on around. Morrissey’s voice – it’s like you either loved it or you hated it. That’s the first thing that I thought when I heard the tape. And Johnny’s guitar – I’ve always been into melodic solo guitar heroes. To hear how they worked together and wrote songs, I just knew it was different even back then. But it was after I saw them live that I knew it – they were on to something. 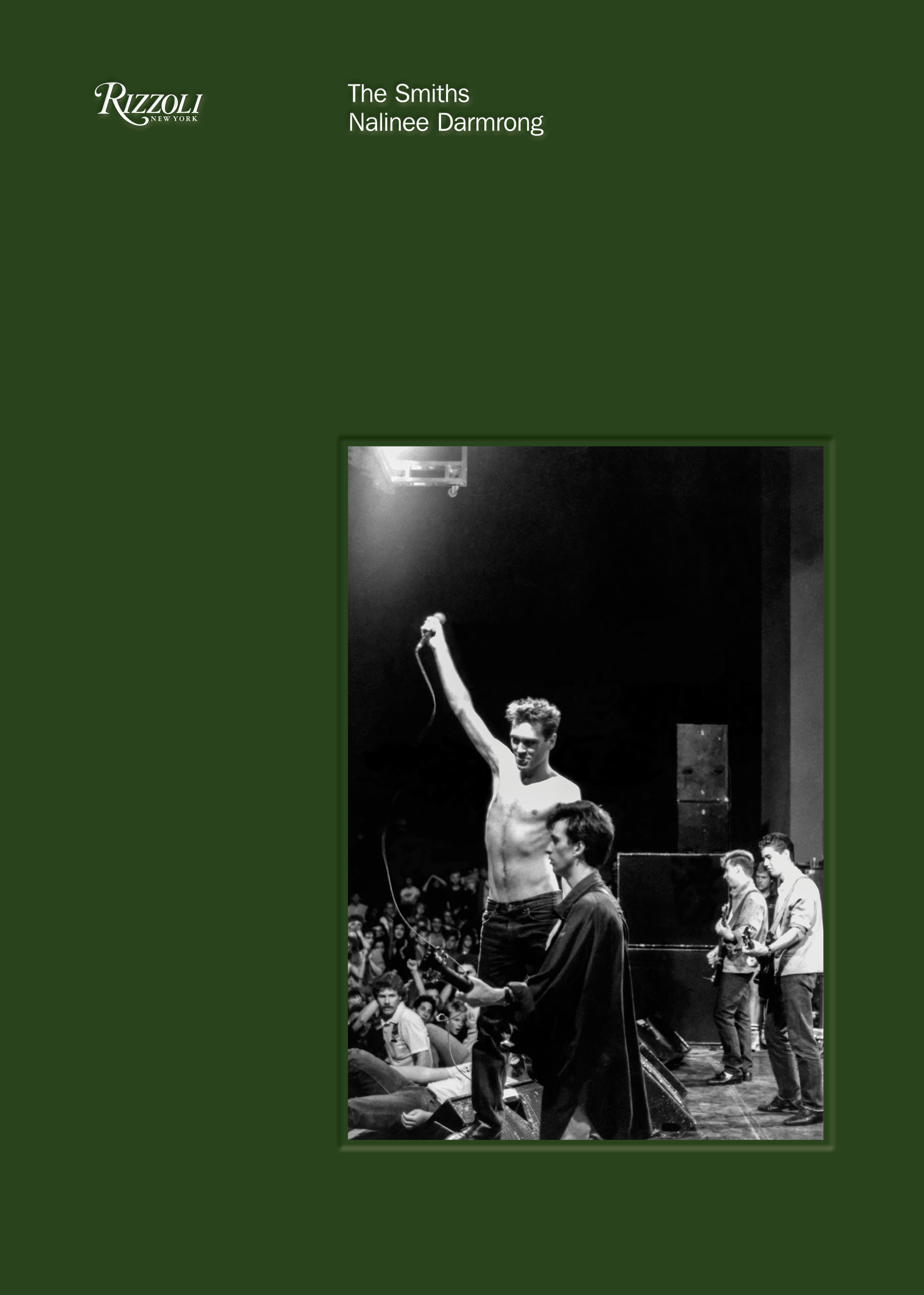 How did the idea of the book come about?
This all happened when I was 17, 18 years old. Through that experience [after the tours], I knew that someday I would want to share it with the world. I never really told anybody about it. Only a handful of friends experienced it with me. It just seemed organic. My friend got me a ticket for my first [Smiths] show in D.C., and then my other friend got me a ticket to the next show [in Philadelphia], and it just kind of happened from there.

Moving to present times, I was working with my editor on another project. I just happened to have this binder of negatives and a little bit of memorabilia. And I showed his assistants – I’m like, “Oh, do you guys like the Smiths?” They were in my home and I was like, “Maybe somebody could take a look at this?” And they were like, “You need to show this to our boss.” And that’s basically how it happened.

Was there ever thought about publishing these photos between then and now?
I always thought about it once in a while, when you reminisce about the good old days, because everybody’s a little older now and experiencing life in a different way. It’s only after the experience when I came home [from the Smiths’ last tour of the States in 1986], I knew was going to do something someday, but I didn’t really didn’t think about it seriously until that day when I showed the binder to my editor’s assistants. My Smiths experience is very personal. There are certain things that I hold very dear, and the Smiths experience is definitely one of them. 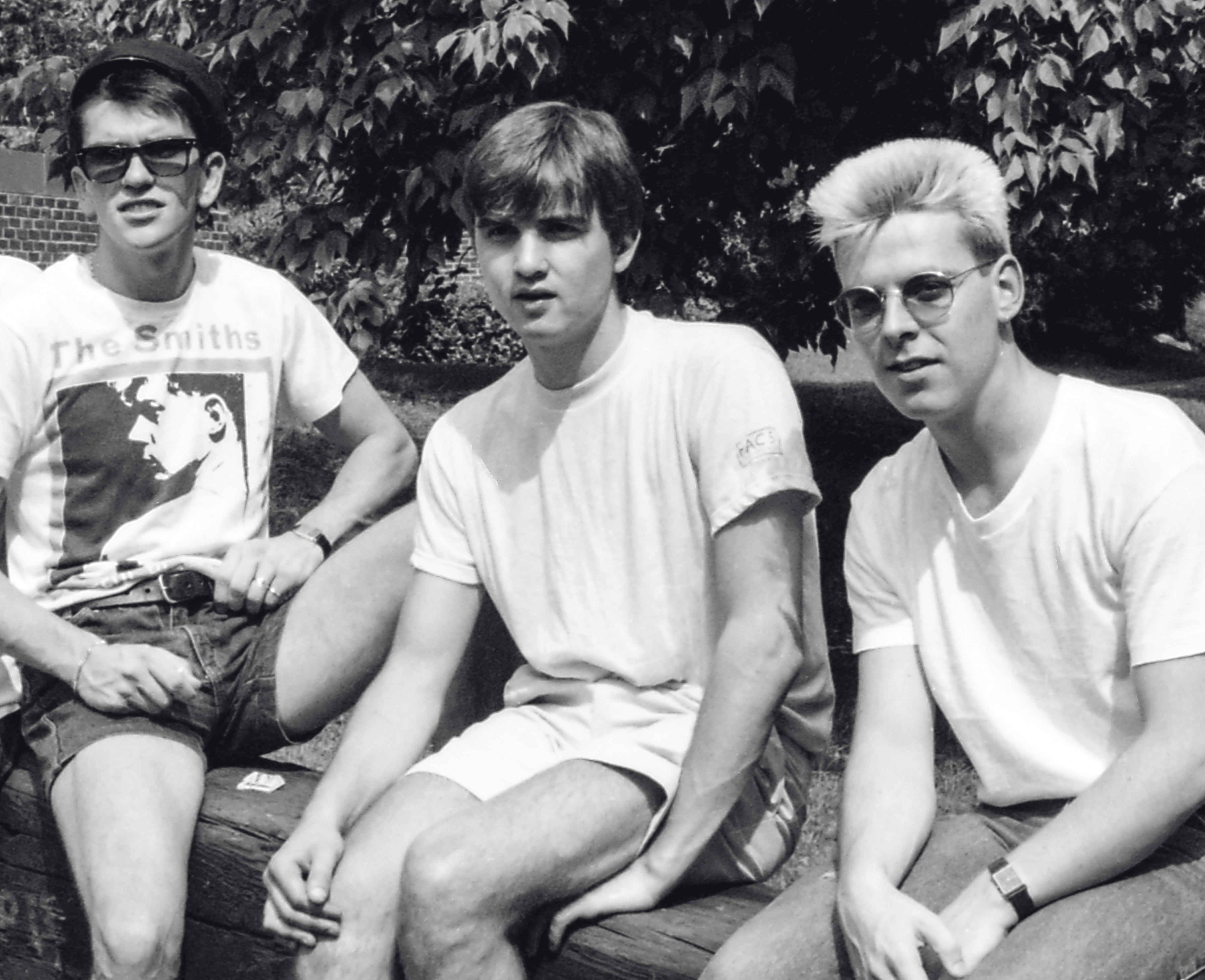 It seems like you were sitting on a goldmine.
But I didn’t see it that way at all. I didn’t know anything about the Smiths. This was the first band I shot live. It’s just luck and timing and great people that made this all happen. Even then I knew I was lucky to be doing this because everybody was returning to college or my older friends had serious jobs. That’s why I documented so much because I was so thankful to them for turning me on to the band. I wanted to, while I was going to these shows, just get as many shots as I could. The Smiths were so great. After they got to know me, they gave me this access. It was like a little family.

You first met the Smiths the morning after you and other fans waited outside their hotel for autographs following their Washington, D.C. show the night before.
It was so funny. It’s like a scene out of a movie. I was with my two or three friends; we met other friends who had gone to the show. We were like crazy kids – “Yeah, let’s play duck, duck, goose” – outside the hotel. And then in the morning, they just came down to the café.

What were your initial impressions when you first met the band members?
Obviously super cool. Just seeing [Morrissey] in the morning – he was very gracious, very friendly, answered everybody’s questions, very patient. You have the Morrissey fans and the Johnny [Marr] fans. It definitely was either Morrissey or Marr, I got the feeling. They would gravitate towards Morrissey or Johnny that morning. For me, if I had to pick one, it would be Johnny because I’m a musician. He’s definitely one of my guitar gods. I learned to play guitar because of him. 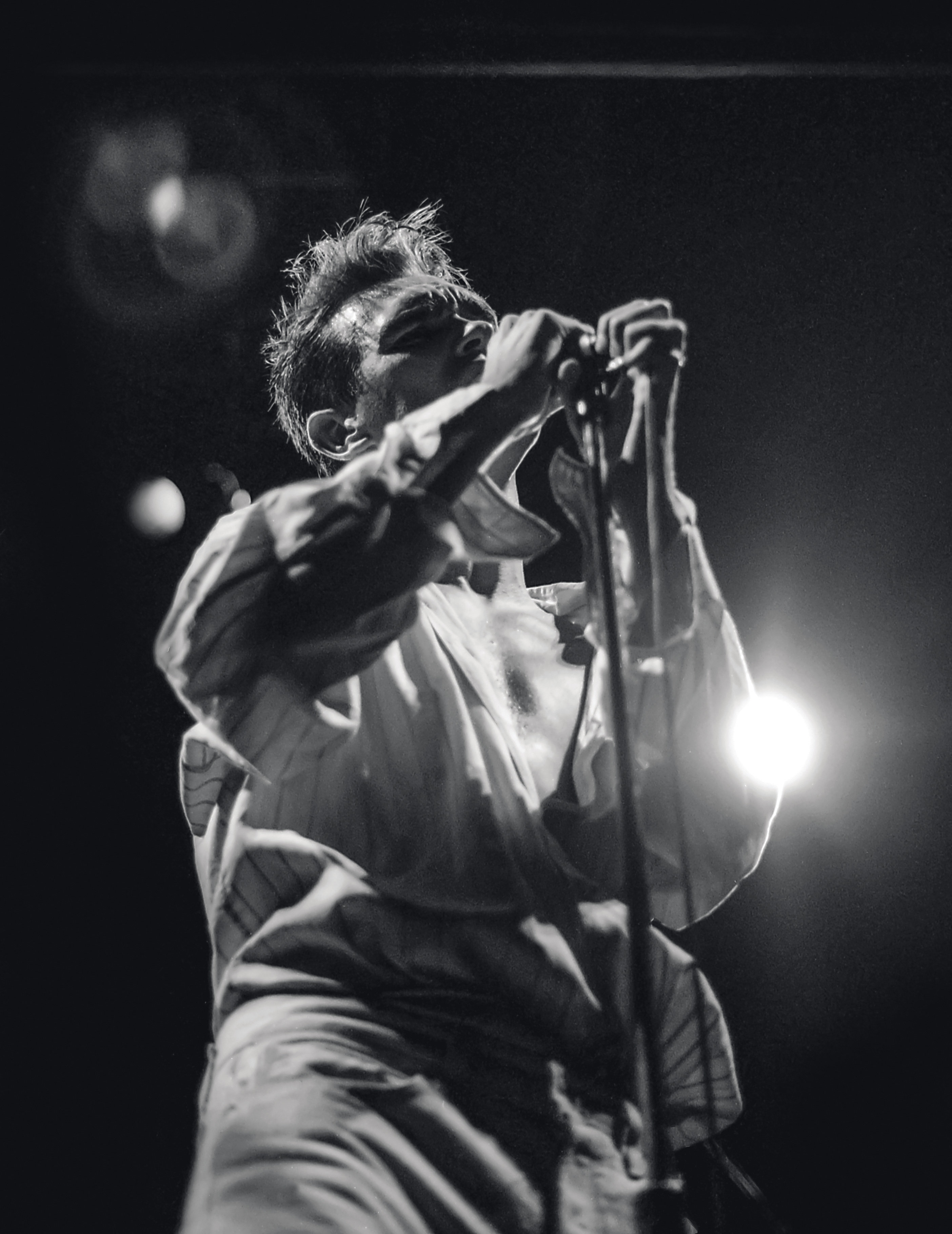 Why do you think they trusted you when it came to access?
I hadn’t seen Johnny for a long time. And I talked to him [maybe two or three years ago] … and I [asked], “Do you remember me?” And he’s like, “I totally remember you from back in the day.” I think I asked him, “How was I?” because I was there all the time. And he said, “Nalinee, I always remember you were really cool and laid back.” I’m glad that they perceived me that way.

How would you describe seeing the Smiths live?
It was one thing to have all the music and vinyl, but to actually see them live was very different. It was like the frenetic energy of a punk-rock show. It was insanity. There’s a Smiths show at the Glasgow Barrowland [in] 1985. They were filming it for the BBC or something, and I was there. My really good friend Tony, who introduced me to the Smiths, was onstage giving Morrissey a smooch on the cheek. People weren’t stagediving but they wanted to get onstage and get close to Morrissey. [The Smiths] encouraged crowd participation; they weren’t stand-offish at all. The kids really felt Morrissey’s message a lot because he wasn’t afraid to be political. You have to applaud anyone in the limelight to really speak honestly about politics, especially in the U.K. 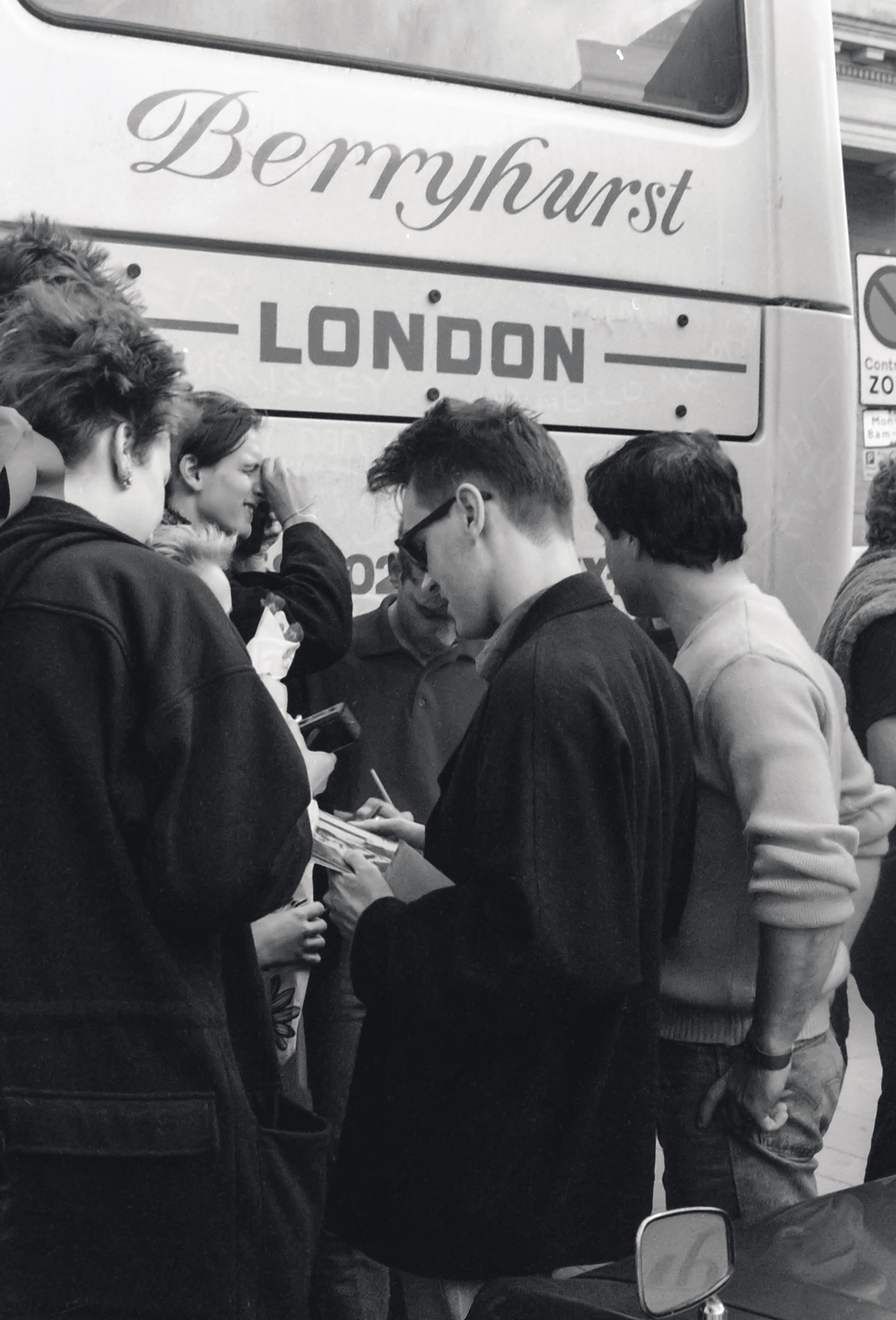 You really tapped into Morrissey’s charismatic essence in the photos you took of him.
He was amazing. Especially back in the day, I don’t know if you know the whole history about him and his gladioli – it was always on his rider. He was into gladioli flowers and he would always throw them across the crowd, and the crowd would go wild. He was a vegetarian, so you had that whole crowd, too. He was really making huge statements and not shying away from it. I think people really admired that.

There are also some really cool live shots of Johnny Marr in the book.
He’s one of the coolest people on the planet. I showed him some of these pictures [years later] because he definitely knew this [book] was happening, and I wanted him to contribute, but he’s working on his very own wonderful autobiography. He remains a guitar icon to so many people.

From what you observed, what was the relationship between Morrissey and Marr during the period you were photographing them?
I tried to be very omniscient. A fly on the wall. Those shows were amazing. I guess what I could say is after seeing so many shows, I think that touring was difficult for them towards the end – I was so fortunate to be there for the last U.S. shows ever. I guess there must have been impending strife within the band that I didn’t personally observe, but in hindsight, I knew that something was going on. I guess I just noticed something beyond tour fatigue. Maybe, for example, something subtle such as more lulls between songs. You know how bands sometimes fight onstage. They never did. And if there was any conflict within the band, you never saw it live. I can only speak from my personal experience – they were always lovely towards me. And they always seemed civil and gregarious towards each other. It’s hard to say – I can’t think of anything specific back then that would make me think they were going to break up anytime soon. 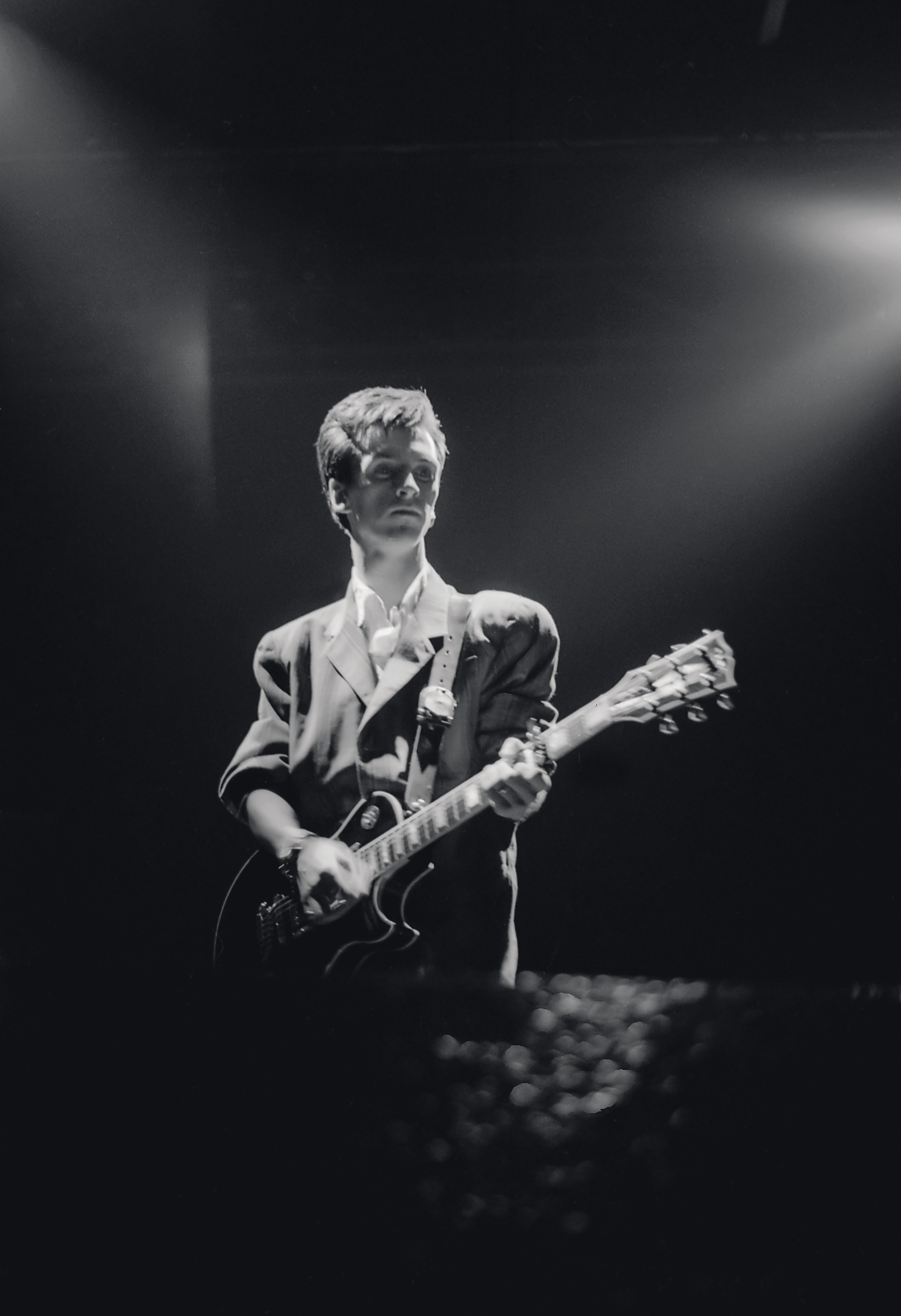 What were bassist Andy Rourke and drummer Mike Joyce like?
They rounded out the band. Morrissey was the prolific lyricist, Johnny was the guitar god, and Andy and Mike were the incredible rhythm section. I mean, they’re all really friendly. I think maybe Mike was the most approachable from the get-go. Andy’s also very friendly but a little shy.

In addition the photos of the band onstage, you took some candid shots as well, such as an overhead scene of a hotel swimming pool.
It was in L.A. I was there, it was a big hotel and they were swimming. I was just around documenting in different places. I got to know the crew really well. With me and my friends, everybody knew us so well. My most fond memories were after they got to know us – for an encore, they always did “Barbarism Begins at Home” from the Meat Is Murder album. It was like our cue and two or three of us would go onstage and dance to that song for every show. It was magic; it was really cool.

What was Johnny Marr’s reaction when you told him you were doing this book?
It was one of his [solo] shows here in D.C. My good friend got me a few minutes with Johnny because I hadn’t seen him in a long time. And I said, “I was thinking about putting this book out,” and I had my iPad and I was just showing him some images. He really inspired me to play music and it was important what he thought of my endeavor. And I hope the one thing from this book – other than passing this legacy to all the people who didn’t get to see the Smiths live – is that I represented the band well.

Are you surprised by the Smiths’ legacy 30 years later?
I’m not surprised. Obviously they were very special to me. I think Morrissey’s lyrics really tapped into a lot of angst. Through his songs, he made all of us teenagers and people in their early twenties – it was like confirmation that we were human. It was very important at that age, because we’re just starting to get out of high school and live “real lives.” I think he was a great foundation for that, and the music is timeless as well.

Your timing was so perfect.
I’m just a lucky, lucky lady. And I was smart enough to bring my camera.