This week marks the release of Sky Ferreira’s debut Night Time, My Time — an album that’s been five years in the making. The budding pop star started making music at the age of 15, and was signed to Parlophone records by the time she was 17. But constant record label drama and ensuing album delays led to a string of EPs, the second of which unexpectedly hit last year with her infectious single, “Everything Is Embarrassing.” The song topped best of 2012 lists and was remixed by everyone from Twin Shadow and Unicorn kid to Unknown Mortal Orchestra. Since then, she played Fallon, posed as the face of mega-retailer Forever 21, partied with Madonna at the Met Ball, and toured with Vampire Weekend.

Recently, she’s made headlines for an arrest in upstate New York for for possession of ecstasy (along with her boyfriend Zachary Cole Smith of DIIV, who was allegedly busted with heroin at the same time) and the topless photo that serves as the cover art for Night Time, My Time. Rolling Stone recently spoke with Ferreira in Brooklyn, about her industry woes, being pigeonholed as a model and that nagging drug arrest.

You worked on Night Time, My Time forever. How do you feel about it these days?
At this point, I’m just glad it’s coming out, and also I just want it to come out so finally I can move on to the next thing. There’s been so much pressure leading up to this point.

How did growing up in Venice Beach influence you?
I always kind of knew I was going to do music, even though I was the only person in my family to do anything music related. I played piano, but I always wrote lyrics and melodies and then I’d go on Garageband. I just learned how to use the programs on the computer. I always put up what I was working on online. Basically I just hated school so much and I wanted to get out of it, but my grandmother wouldn’t let me dropout. She did hair for Michael Jackson for a long time. I started singing gospel when I was 7 years old. I wasn’t really religious — my mom was. But it was actually Michael who told my mom that I should go to church, just because I liked singing. So that’s how I learned to sing live. That’s why I can’t sing something unless I mean it. I’m not super religious but it felt good singing stuff that mattered to someone. 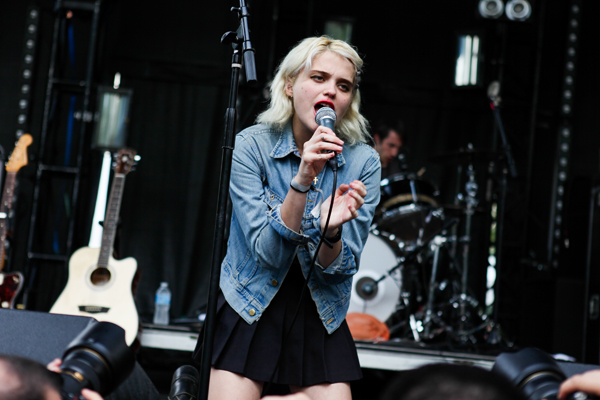 Was it an exhausting process working with all these different song writers and producers the label paired you up with?
I actually liked it; it was a learning experience. I liked meeting all those people and working with them and I learned a lot from each one of them, because they all work differently. But it gave me an identity crisis because I didn’t know what I was supposed to do. One day they were trying to make me like Katy Perry and then next it was people telling me to be like Lady Gaga, literally whoever had a hit on the radio. I also had nothing to write about either.

Would you say your sound is “nostalgic”?
A lot of what I like isn’t new. But I didn’t want to make something retro, either. So it was like, how do I bring all of these elements together and make it new, and still make it pop music at the same time? I listened to a lot of Kraut-rock, and I went and used a lot of the sounds from that, but tried to figure out how to make it more modern sounding. Bands like Le Dusseldorf still sound fresh but it was trying to bring all these different elements into it.

How did modeling become such a big part of your life?
I use the money from modeling for my music. I use it to support myself. I don’t make that much money in music, yet. It gives me the freedom to do what I want musically because I don’t have to rely on someone else’s money to do something. I like doing modeling. It’s more than a hobby obviously because I get paid for it, but it’s a big part of my life. I see it as all connected.

Does it bother you when people want to put you in a box or turn you into a hyphen?
It’s annoying when people are like ‘model-turned-singer’ but whatever, let people think that. Both things are happening so I’ve just learned to accept it. People act as if it makes me less of a musician, but I don’t agree with that at all.

Do you think modeling interferes with what you want to do musically?
Honestly, it got me out there more. IMG was booking me, it had nothing to do with my label. Givenchy had me play their after party for fashion week and they could’ve had anyone they wanted, I mean everyone wants to be associated with Riccardo Tisci, but this was at a time when nothing else was happening for me. Hedi Slimane was shooting me, this was before he became head of YSL, and these people were the ones helping me get out there and be more known. They were helping me financially because it was supporting me, but also helping me get my music out there, and supporting my music. I didn’t have to change myself for fashion. Everyone thinks it’s way more shallow and vapid but for music, everyone wants to change me, ironically. With fashion they want me for what I am.

Who do you want to collaborate with in the future?
I want to make an EP in France. I was talking to people like Air and stuff before so I’d really love to work with them. I really hope I can make a record with Daft Punk. I met Guy-Manuel and we like a lot of the same stuff and I feel like I could learn a lot from him. I feel like we connected in a lot of ways, musically and that we could do something cool. Paris Hilton has tweeted at me and she’s totally cool, I’d love to write a song for her. And Courtney Stodden! I would totally do something with Courtney Stodden. Cher! I would love to work with Cher on everything. She’s literally a goddess and had been in the game forever.

Where do you see yourself in 10 years?
Still doing music! Maybe some other things, I’d like to branch out with movies, not just acting. I met Eli Roth through Jeremy Scott and I’ll be in The Green Inferno, out next month. Even though it’s a small part, it was still awesome to work with him, he’s like the master of horror movies these days.

Have you been following Lorde’s success?
She seems pretty outspoken and she doesn’t seem to shy away from it. And she’s even younger than me! I wasn’t as open to all of that because there was still very much a music industry when I started out. The internet wasn’t as intense as it is now. She probably has seen so many examples of what happened to me. She probably knows better. I think it also has a lot to do with the fact that she’s not from America either. They’re not going to try to make her be like Britney Spears. America is more conservative in that sense.

Have you met people through Twitter like you used to on Myspace?
I met Miley Cyrus through twitter. She followed me and after I realized she was doing work with Terry (Richardson) and that she was really cool and then we just started talking and she invited me to her album release party. It was a lot of fun and she’s really smart. People are totally fucking with her. It was nice to be around someone who wasn’t competitive — girls can be so competitive — or worried about how to act. She didn’t care about who I was, someone who wasn’t judging me for once.

What’s the truth behind your whole drug arrest in September?
It was totally taken out of context. I got myself in a really stupid situation. I didn’t even get charged with what other people are putting on me. I’ve noticed — and I’m not saying Cole should get shit — but just because I’m the girl, I’m the face of this story. It’s way more scandalous to have a girl with drugs than a guy in a band with drugs. It’s the double standard. If a girl has a breakdown or if the black guy has a blog post, it’s a rant. Someone like Billy Corgan can write a whole entire thing and people are like ‘Oh it’s just a blog post’ and Kanye does it and it’s a rant. I’ve lost a lot of modeling contracts because of this whole thing. I can’t really say the names, but for the more commercial jobs, I get it because big brands can’t be associated with drugs and stuff. But it’s weird how I became this ‘heroin addict.’ When I say I don’t do heroin people say I’m being defensive when I’m just being honest. I would’ve gone to rehab by now, I would’ve released a statement that was like, “I’m so sorry it wasn’t mine I was just in the car.” Sorry people! People are pissed about the ecstasy, but that’s not what they’re writing about. Everyone wants heroin. Because the truth is, they probably all do ecstasy, but they’re all high and holy. Other people have given me shit about it, and I’m like, “it’s on the radio!” Like every song is a song about molly. That’s life. I’m not saying that people should do ecstasy, but at least it’s a happy drug. It’s not like like I’m supporting drug use. But at the same time, I’m not going to sit here and let people call me a fucking drug addict when I’m not. People can say I’m being defensive about it but I’m not promoting drug use, I’m not telling little girls to do heroin. I don’t think heroin is cool. The thing that bothered me was that some people were saying I wanted it, that it would be good for my album. Do you think I wanted my mug shot on TV? Do you think after five years I really wanted something like this to happen? I’ve had to go through the fucking ringer for it. My life moves on and I have to still keep doing my thing.