Despite electrifying sets by Skrillex, Bassnectar and Amon Tobin, there was no mistaking the fact that Camp Bisco 11 was centered around its host band, the Disco Biscuits, who performed six totally different, equally compelling sets of music from the main stage over the festival’s three nights at a property in Mariaville, New York, just outside of Albany.

The Disco Biscuits launched Camp Bisco in 2000 with the idea of combining sets by electronic DJs with improvisational rock bands at a time when both the jam band and electronic dance music scenes were taking off in their own rights. The two scenes overlapped at a certain juncture via bands like Sound Tribe Sector Nine (STS9) and the Disco Biscuits. Camp Bisco has since expanded to include indie rockers and hip-hop artists. This year, the emphasis had clearly and decidedly shifted to electronic acts, with labels like Ninja Tune, Fools Gold and Skrillex’s OWSLA curating tent lineups.

That said, one of the highlights of the weekend came from Portugal. the Man, who relied on traditional instruments to tear through a set of psychedelic rock music, including a cover of the Beatles’ “Helter Skelter.”

Immediately after their set, Portugal. the Man’s Noah Gersh told Rolling Stone that the band actually felt completely at home performing at a festival that favored EDM and which was anchored by a jam band. “We really like a lot of rock & roll but we’re not purists in any sense of the word,” said Gersh. “I love a ton of electronic music – we all do.  A ton of people are doing a lot of really exciting things and I think all of us just really like people who are pushing boundaries.”

Interestingly, Portugal. the Man’s set was sandwiched between the two biggest hip-hop attractions of the weekend: Break Science featuring Chali 2Na (Jurassic 5) and Big Boi. The former, which also features one-time Pretty Lights drummer Adam Deitch, played on the adjacent main stage directly before Portugal. the Man, without so much as a minute’s break in between. “We tend to like stuff with a lot of bass, and that was happening right before we played, so it was great to really pump us up,” said Gersh.

Big Boi arrived late for his set, cutting his designated hour down to just about 20 minutes, but it was enough to get the crowd moving along to “The Way You Move” before handing the stage over to Lotus, another live rock band that incorporates elements of electronic dance music with jam rock.

One of the most highly anticipated sets of the weekend – Bassnectar on Saturday – was not only the dance throwdown people were expecting, but his very appearance at Camp has also become something of an annual tradition. He’s played at the last five Camp Biscos in a row, beginning on a small side stage in the outer campgrounds in 2007, to playing “tweener” slots in between Disco Biscuits sets to, finally, playing a 90-minute prime-time show on the main stage. 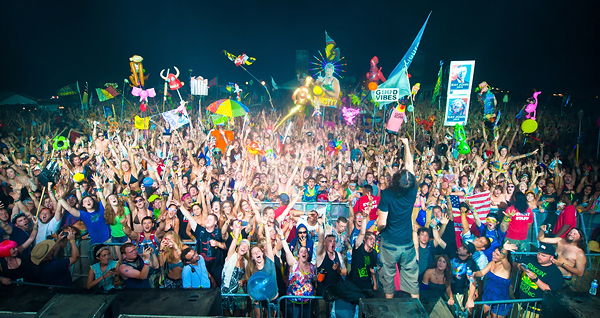 “Camp Bisco is always raucous,” Bassnectar – a.k.a. Lorin Ashton – told Rolling Stone after his set. “Every year, it’s a huge storm or mud bath or in some way just a freak fest, with . . . millions of hippies and ravers, and it’s one of the most loaded and bananas lineups each year . . . It just feels like anarchy.” In honor of the occasion, he showcased some new material, testing one out for the first time and also throwing in a new “bootleg remix” of a Modeselektor tune – followed by a musical tribute to Pennywise.

In addition to their six proper sets, all four members of the Disco Biscuits performed additional sets throughout, separately, primarily in the VIP tent during the late-nights. The best came on Friday night from the Disco Biscuits’ guitarist Jon Gutwillig, who led a one-off ensemble entitled Kick Rocks, which also included Lotus’ Mike Greenfield on drums, Brothers Past’s Clay Parnell on bass and Dopapod’s Eli Winderman on keyboards. The heavily improvised jazz-funk jams included a freewheeling dance groove that the band named “Space Fusion” only after performing it, and later they turned a dance rave-up into a playful instrumental take on Spinal Tap’s “Big Bottom.” Completely unplanned.

The VIP tent was also the place to be on Saturday night when Conspirator – which features the Disco Biscuits’ Marc Brownstein and Aron Magner along with guitarist Chris Michetti – paired up with Big Gigantic and Ben Baruch from the Underground Orchestra. They performed a joint venture entitled Gigantic Underground Conspiracy that they plan on repeating next weekend at Gathering of the Vibes in Connecticut. Earlier in the night, Big Gigantic saxophonist Dominic Lalli sat in with the Disco Biscuits during their second set of the day (and earlier in the weekend, he sat in with Emancipator). It’s a fitting summation of the spirit of Camp Bisco, which places a high premium on collaborative cross-jamming and a sense of community.

Worlds also collided on Thursday night when Skrillex, who performed right before the Disco Biscuits’ headlining set, chauffeured Gutwillig around – from the OWSLA late-night dance tent to the silent disco and then backstage – on a golf cart. “Skrillex is a considerably better golf cart driver than me,” Gutwillig told Rolling Stone afterwards. 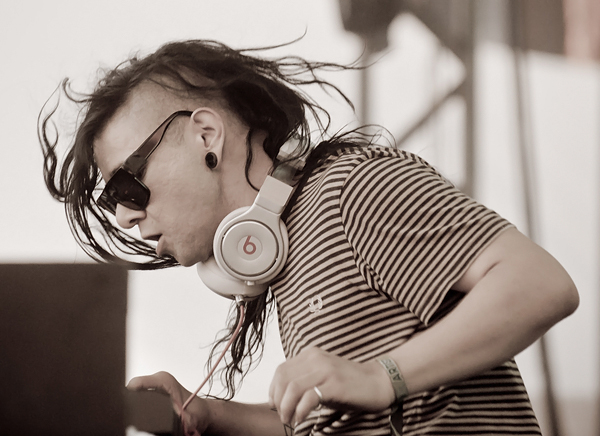