Let Me Make You a Martyr, the upcoming, harrowing new crime movie about an abusive father, is set to reunite Sons of Anarchy’s Mark Boone Junior with shock rocker and erstwhile Sons actor Marilyn Manson. While the film won’t arrive until next year, check out an exclusive trailer featuring Manson as a Native American hit man.

Boone plays Larry Glass, a character whom the movie’s producers describe as “a drug dealer, pimp and all-around scumbag,” who hires Manson’s character Pope, a hit man (or “bogeyman,” as Manson describes it), to find and kill the grown-up adopted son rebelling against him.

As the cryptic trailer shows, much of the drama revolves around the son (Niko Nicotera) and the adopted sister (Sam Quartin) he’s fallen in love with and how they’re trying to break free from Boone’s character’s clutches. Nicotera and Quartin’s characters meet in a diner as Manson looks at them ominously. Meanwhile, Nicotera tells a story about finding peace in chaos juxtaposed with shots of Manson covered in blood and Boone driving.

Marilyn Manson: The Vampire of the Hollywood Hills

For Manson, it was a welcome reunion with Boone. “Mark brought me into the project,” Manson says. “We were friends from Sons of Anarchy. He’s sort of my unwanted mentor. He tells me what to do. He’s always encouraged me, but he’s very bossy about it. He says things like, ‘You gotta do this, motherfucker. You’ll like this.'”

“He’s no spring chicken,” Boone says lovingly and carefully of why he prods Manson into acting. “Who wants to be a rock & roll star his entire life? I thought he was the perfect choice for this.”

Boone came into the project via co-writer and co-director John Swab, who based the story partly on his own life. “It felt very authentic,” Boone says. The film had grown out of a half-hour short that Swab made with Martyr partner Corey Asraf, titled Judas’ Chariot, which starred Quartin, but Boone took on the feature-length movie without seeing its predecessor because, as he puts it, “I trusted my feelings about John.”

In addition to Sons, the actor had been working with Manson on a TV show he’s been trying to launch called Dave and Shim, for which there are already a number of YouTube shorts. “[Manson’s] just a monster intellect and a fascinating guy and [Dave and Shim] offered him the chance to sink his teeth into an acting role, which, at the time, he’d never had before,” Boone says. “He’s so hilariously fantastic and such a quick-witted human.”

“I just had to observe the level of poverty and white trash element to the story,” says Manson. “Just seeing that, I knew where to go”

With Let Me Make You a Martyr, Boone’s gut instincts about Manson were spot-on, as the rocker loved the role.

“Within the first day, I was asked if I wanted to skin a coyote,” the singer says excitedly. “It was already dead. And I was asked to burn down a house and ‘kill’ a bunch of people, so the answer was ‘yes’ obviously.”

Beyond the shocking hijinks, Manson says he was able to fall into character easily upon arriving in Tulsa for the shoot. “I just had to observe the level of poverty and, I guess, white trash element to the story,” he says. “The house where my character lives, sort of on a swamp on a reservation, looked like a combination between Texas Chain Saw Massacre and Apocalypse Now. It was pretty epic. Just seeing that, I knew where to go.”

Aside from taking delight in horrific surroundings, Manson also identified with another trait of his character: “I am part Indian,” he says. The singer adds that he did not know Pope was Native American when he took the role because the script didn’t specify it.

“I really didn’t have to change too much about myself physically,” he says. “I already had just shaved my hair to a Mohawk and it’s black already, so without being stereotypical, that seems like the character would have that if he was part Indian. I think originally they had envisioned someone with long black hair.”

Manson’s heritage is Sioux on his mother’s side – “her family was from the Appalachian Mountains, West Virginia” – but other than taking part in a Native American–run program akin to Boy Scouts, that side of his family was not heavy on his upbringing. “They gave me one of those wooden, carved tom-tom drums and it was bound with animal hide and it was painted,” he says of his sole memory of the experience. “I just remember I ended up stealing the drum and never going back.” He laughs.

Boone took the role, he says, simply because he likes playing a bad guy. “Somebody’s gotta do it,” he says, joking. “He’s just another guy out there trying to make a living, I guess, but what makes people unhappy, I think, is a mystery. I think unhappy people often do very cruel things…. I’m kind of like that so…I’m unhappy and I do cool things a lot.” He laughs.

“I often think about what evil is,” he adds. “I don’t know if there are people who do evil things on purpose. I guess a lot of people have their reasons for doing what they do and their justification. But people get stuck in corners that they can’t get out of and react like caged animals. People often feel they have had unjust things done to them and they feel justified in reacting in horrible ways. I think that’s what provokes this guy. He thinks that his adopted son has violated him horribly. So he tries to fix it by doing more horrible things.” 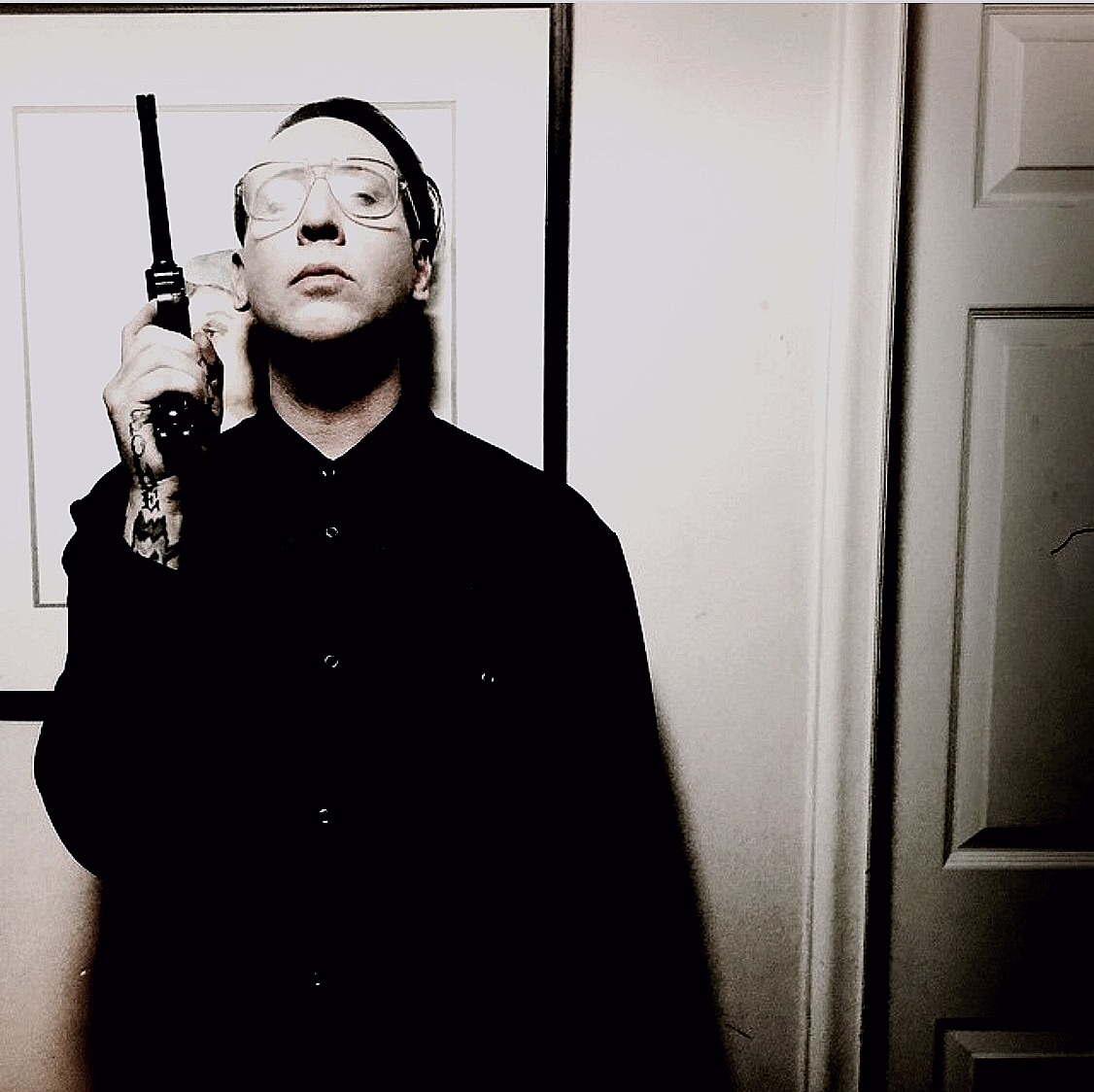 Boone, whose extensive résumé includes movies like Memento and Batman Begins as well as TV shows like Seinfeld and The Wonder Years, says this production stood out to him as something special. “It was a really great working environment,” he says. “I’m very hopeful about the prospects of this project. It’s a really interesting story and a lot of good people are involved.”

Manson, too, is excited about Let Me Make You a Martyr. “It was the biggest role that I’ve played,” he says. “On the script, I’d say I was on half of the pages. I don’t know how the movie will end up though.”

The singer says he’s also energized about another acting project he has in the works, specifically, an idea that was born out of his current tour with Smashing Pumpkins. “Billy [Corgan] has plans on directing and we have a project that we were thinking about doing,” Manson says. ” It’s based on a book that I read when I was making Mechanical Animals, that he had given to me. It might be a pretty grand project, so it might not happen for a little while but it’s a script that he’s had for a long time. I have to keep it a secret, but it’s a great role.”