When Bob Dylan fans picked up copies of Bringing It All Back Home in 1965, they weren’t just struck by the electrified folk-rock of “Maggie’s Farm” and “Subterranean Homesick Blues.” Some were also intrigued by its cover, where a dapper Dylan was seen joined by a mysterious brunette in a red jumpsuit, holding a cigarette and staring down the camera.

Although few knew it at the time, the woman in the iconic photo was Sally Grossman, wife of Dylan’s then-manager, Albert Grossman. A formidable figure in her own right — both in the Sixties music scene and then in the Woodstock music community for decades after — Grossman died on March 10th at 81. Her niece Anna Buehler confirmed the death to Rolling Stone, adding Grossman died in her sleep at her home in Woodstock.

How Bob Dylan's 'Bringing It All Back Home' 'Stunned the World'

Starting in the early Sixties, Albert Grossman became one of rock’s most imposing managers — a daunting teddy bear of a man who steered the careers of Dylan, Janis Joplin, Peter, Paul and Mary, the Band, Gordon Lightfoot, and many others. “Albert was a good manager,” Sally Grossman told RS in 2014. “He said, ‘Artists need managers. They can’t do it for themselves. You can’t negotiate for yourself.’” According to Sally, it was she who also introduced Dylan to his soon-to-be first wife, Sara Lownds, one of her friends.

“Albert wanted to get the best deal for his performers,” says Barry Buehler, Sally Grossman’s brother. “He always felt they had not gotten their due and he worked very hard to make sure they were well compensated.  And Sally was a sounding board for a lot of his ideas.”

Born Sally Buehler in Manhattan in 1939, Grossman grew up in Queens, New York, attended Adelphi and Hunter colleges and, like many of her generation, was drawn to the flourishing music community in Greenwich Village in the early Sixties. Dropping out of college, initially for an office job at TWA (Trans World Airlines), she became a waitress, first at the Café Wha! and then the Bitter End. There, Grossman saw many of the scene’s leading figures and met Albert Grossman, who had moved to New York from Chicago, where he ran the Gate of Horn club. “Back then Albert never even said hello to me,” she said in 1987. “He was too purposeful, too busy.”

Albert Grossman, 13 years her senior, was indeed immersed in his work. The two married in 1964, and his wife had a front-row seat to that world as the two became one of the power couples of the rock and folk communities. “The years between ’64 and ’70 were a total blur,” Grossman recalled in 1987. “Our life was incredibly intense. Every night about 30 of us would meet at Albert’s office on 55th Street to go out. The office was constantly packed with people — Peter, Paul and Mary, of course, but also Ian and Sylvia, Richie Havens, Gordon Lightfoot, other musicians, artists, poets.”

Around 1963, Grossman had purchased a home in Woodstock. Dylan began visiting him there before moving to the town himself, followed soon after by the Band, who took up residence in the house known as Big Pink. Talking with RS in 2014, Sally amusedly recounted the story of the Band’s ill-fated first audition for her husband. “Albert was invited over to Big Pink to listen, so he could sign them to management,” she said.

“We go over there and Levon and Rick had girlfriends, and they had told the girls, ‘Albert is coming and make a cake.‘ So they make a cake and say to us, ‘Here, have a piece.’ The Band starts to play and Albert whispers to me, ‘We gotta go home right now,’ and we leave. They thought Albert hated the music, but the truth was that the girls had run out of cake flour and threw in buckwheat pancake flour into the mix, and Albert was highly allergic to buckwheat. He was turning red. They were just so devastated. They’d built up to this thing and were playing their song and Albert walks out. It was kind of a joke with the guys for years.” 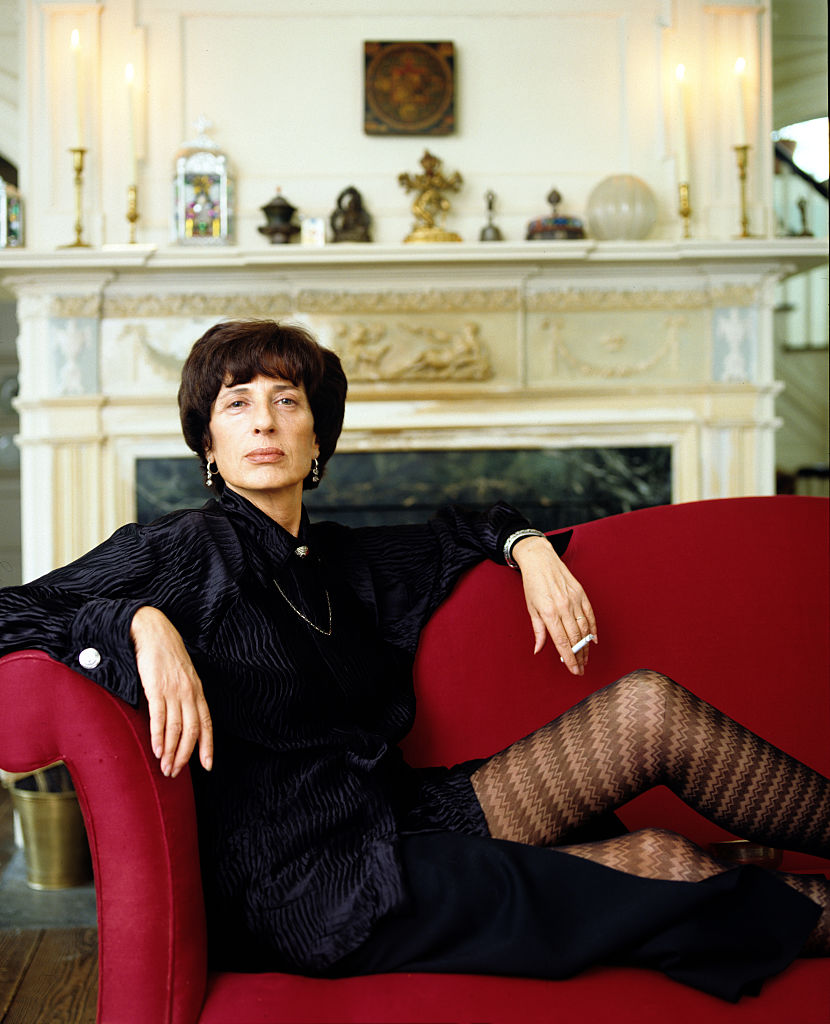 Sally Grossman in 1996, shot in the same spot with same mantlepiece as ‘Bringing It All Back Home’ cover

Albert Grossman was extremely protective of his clients, and Sally had similar inclinations. As she told author David Hajdu in his book Positively 4th Street, that sense of discretion also played into Dylan’s low-key relationship with Lowdns (who first saw Dylan on TV while visiting Grossman). “He didn’t like people prying into his family and the things that were really closest to him,” she told Hajdu. “If he was really serious about her, she had to be unknown. That was one of our [the Grossmans’] jobs, to help give him that privacy.”

Sally Grossman, who had an imposing presence equal to that of her husband, had similar feelings about outsiders. “I’m very wary of journalists,” she told RS in 2014 during an interview about the release of the complete Basement Tapes collection. Asked about the mysterious motorcycle accident that derailed Dylan right before those recordings were made, she said, “Of course Rolling Stone is going to ask about that. And of course I decline.”

Albert Grossman died in 1986 of a heart attack on a flight to Europe. By then, he was largely out of the management business (he and Dylan had ended their professional relationship by the late Sixties) but had opened a studio, Bearsville (where R.E.M., Meat Loaf, Metallica Jeff Buckley, and many others recorded) as well as two restaurants. After his death, Sally continued to oversee the studio, his label (Bearsville Records) and completed his dream project—turning his storage shed into a theater. As she told it, she had no choice: zoning laws in Woodstock were about to change, making it impossible to open a music venue in the future, so she was forced to take on the project earlier than she thought. The Bearsville Theater opened in 1989; Grossman sold it in 2004.

Along the way, Grossman developed a reputation as an imposing businessperson of her own – and one who also largely avoided the media spotlight. In recent years, she had largely been retired from the music business but had been working on some form of documentary about her late husband.

Yet Grossman remained perhaps best known for her appearance on the cover of Bringing It All Back Home, taken at the Grossman’ Woodstock house by photographer Dan Kramer. “Bob said, ‘Let’s put Sally in the picture,’” recalls Kramer, who says Grossman wanted to be a fashion model and had taken fashion photos with him. “I think Sally is very important in that picture. She completes it. We don’t know who she is. She’s the woman of mystery. People wrote to me and asked if it was Bob in drag! Sally wanted to be a fashion model. She got a little exposure, but she got a lot more being the woman in red.”

Grossman herself was “amused” by the ongoing fascination with that photo, according to her brother Barry. In a 1996 interview, she herself said, “I was around and Bob just asked me to do it.” Of the red jumpsuit, she added, “I don’t think I’ve worn it again.”

Lizzie Vann, the current owner of the Bearsville Theater, met Grossman for the first time in 2019, when she bought the venue at auction. Vann was well aware of Grossman’s appearance on the Dylan cover, but says Grossman was not remotely interested in discussing it. “I would try to talk to her about things like that and tell her she did an amazing job with the theater and running the studio,” Vann says. “And she would be dismissive and say, ‘It’s not about me — it’s about Albert.’ But she lived across the creek and she could see the theater and she’d say, ‘I can see what you’re doing! I need you to paint this and that!’”