“For sometimes, even the strongest soldier falls,” sang a band of 14 veterans backing Roger Waters and guitarist G.E. Smith at New York’s Beacon Theatre, closing a set that included Pink Floyd’s “Wish You Were Here” and Bob Dylan’s “Knockin’ On Heaven’s Door” for the Bob Woodruff Foundation’s Stand Up for Heroes benefit Thursday.

As part of the New York Comedy Festival, the event featured performances from Jon Stewart, Ricky Gervais, Mike Birbiglia, Patton Oswalt and Robin Williams, raising pledges for wounded troops battling the hardships of returning home from combat in Iraq and Afghanistan. (Watch the entire show below.) An auction drew $110,000 for the guitar and harmonica Bruce Springsteen played during his acoustic set.

“Our wars are certainly not the kinds of death wars that they were before, but now there’s something much more complicated and long-lasting,” Woodruff told Rolling Stone of veterans’ unseen post-war scars, like depression and post-traumatic stress disorder. “Their fear was people were going to think they were making it up and they would lose their integrity. That has now changed significantly.” 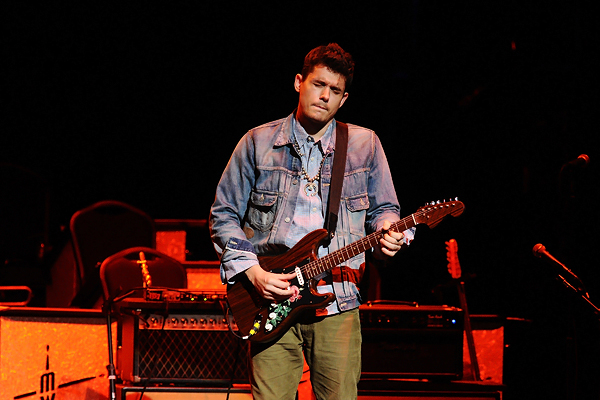 Woodruff suffered a traumatic brain injury from an improvised explosive device attack in Iraq while reporting for ABC in 2006. Since then he and his wife Lee’s foundation has steered $12 million toward more than 70 organizations for veterans, including those dedicated to preventing suicide.

Other wounds are more visible. Marine Corporal Aaron Mankin, a 30-year-old combat correspondent and father, lost his nose and ears in an IED attack in 2005, and has since become a national spokesman for military recovery. “We all have problems, we all have struggles,” he told Rolling Stone before speaking at the benefit. “Life goes on. New troubles find you. New triumphs come to your doorstep.

At Walter Reed National Military Medical Center in Washington D.C., more than 100 patients are treated each day for amputated limbs and critical burns, while many others recover from less obvious long-term wounds. There Waters recruited his lineup of guitarists and singers, who play with the hospital’s Musicorps rehabilitation program.

“I certainly believe that pursuing the intricacies of playing a musical instrument, which are considerable and difficult, give these guys a focus in the humdrum of recovery that they maybe don’t find elsewhere,” Waters told Rolling Stone in an interview earlier this week.

Waters’ set was preceded by a one-song performance from John Mayer who, without a word, soared through the Beatles’ “The Long and Winding Road” on his electric guitar to start the evening. Springsteen later strummed a couple of his more recent anthems (“We Take Care of Our Own” and “Land of Hope and Dreams”) and brought the house to its feet with “Working on the Highway” and “Tougher Than the Rest,” during which his wife, Patti Scialfa, took the stage to harmonize.

“I imagine America for a living, and I put it into a song,” Springsteen told the crowd. “And it’s not something I could do, truly or freely, without the sacrifice and service of the men and women sitting in front of me.” 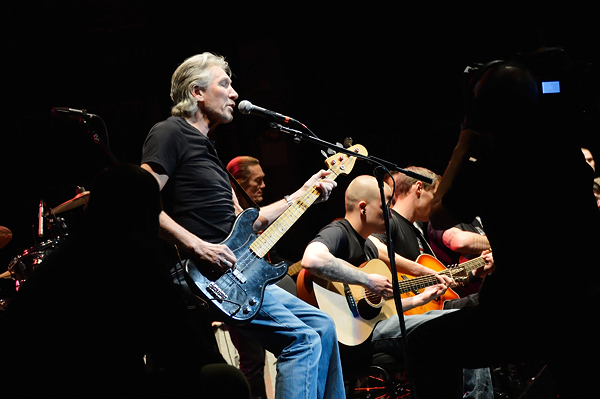 Springsteen cracked a couple of jokes between songs, and the night of music shifted to an hour of back-to-back sets from the comedians, including an intensely physical nine minutes from 61-year-old Williams, who bemoaned the iPhone’s fickle Siri feature (“It’s an iWife!”) and recalled his only mushroom trip at 18, when he confided in the family cat (later realizing they never had one).

“You guys are my heroes,” Stewart said, addressing the front rows of veterans. “What a way to celebrate the most fucked-up election of our lifetimes!”

During a party following the event, the sixth annual, Waters arrived with a Beck’s beer in hand and posed with Williams for photographs with veterans in the 38-degree chill.

“We’re going to have one every single year as long as it is needed to deal with these problems, which I think sadly is going to be decades and decades, if not even more,” Woodruff told Rolling Stone. “I think one of these days my dream would be to go back to the very spot where I was hit. In a great world, maybe that would be peaceful.”