Rockie Fresh stood alone onstage at SOB’s, not exactly smiling or grimacing or allowing any discernible emotion cross his unlined face. He’s 21, an insider to Chicago by location, an outsider by sound. Whereas much of hip-hop for the past year has been taken over by the city’s drill movement, Rockie channels softer influences: Drake, Kid Cudi, A$AP Rocky, a human constructed from a vision board made of XXL Freshmen covers.

Electric Highway, his just-released mixtape, sounds like 808s & Heartbreak, just without the, well, heart. (Instead, he toes the company line and offers MMG-ian broadsides:”Do better, I know you like my new sweater/ Young nigga, new cheddar, my team is rich forever.”) Onstage, his performance plays out like a game of connect-the-dots, his most dramatic motion a raise of the hand or a stroll from left to right. Someone in the second row films Rockie with an iPad, blocking out much of the rapper’s body, his nose barely poking above it. He cuts a small shadow in a zipped-up Bape hoodie, not holding the stage down so much as it goes the other way. 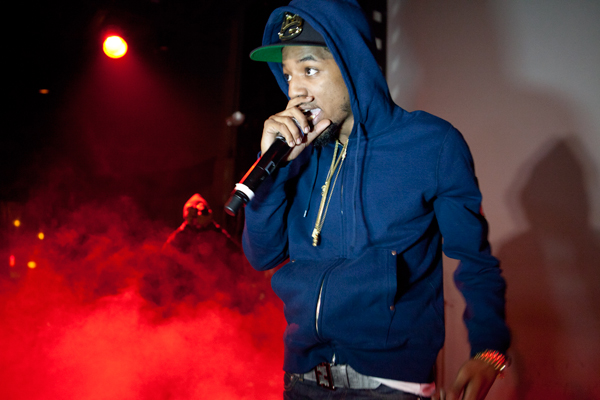 SOB’s exists as a rite of passage for upcoming rappers, a pivotal moment in the timeline as these things go. Kendrick Lamar is the best recent example of someone who walked out bigger than he’d walked in, as someone who took blog posts and turned them to confetti. Big KRIT got booed; Dom Kennedy packed the place but few paid attention. (A sub-par show certainly doesn’t end a career. 2 Chainz barely rapped at his debut, choosing to smoke instead; Kanye famously screamed at Drake in his dressing room after Drake apparently failed to live up to Mr. West’s standards onstage.) Rockie Fresh’s first headlining performance in New York will not be remembered as the one to set the world on fire, less a footnote than a misstep. Rockie walked the stage with training wheels, mumbling over his backing vocals. When performing alongside Sasha Go Hard last night for “Show Me Somethin’,” she and Rockie seemed to have a competition over who could suffer more from stage fright. Ironically, the song is about those who talk big and those who can deliver.

Video: Behind the Scenes With Rick Ross

Rockie looks out into the audience, where Chicago’s Lil’ Durk, Young Chop, Sir Michael Rocks and Sasha Go Hard stand, then back at his shoes. “This song is super-important to me. I come from a place, Chicago, where there’s a lot of senseless killing and shit like that, but man, I really want to see people live their life long,” he says, before rolling into”Life Long,” a cooing, pulsing Boi-1da production that features guest appearances from Nipsey Hussle and Rick Ross. (The song celebrates one putting in work to be able to buy expensive things, an idea at best tangentially related to the introduction he had given it.)

“Shout out to my big homie Rozay for this amazing-ass verse!” The DJ drops a “RUH” sound effect; there’s applause. Rockie continues: “I gotta rap Rozay verse, though. This shit cold.” Ross sits 15 feet away in a VIP section with Busta Rhymes and several men in MMG jackets while Rockie Fresh performs his boss’ words for the second-to-last song. The closer, “You a Lie (Remix),” also features Ross’ vocals. Rockie manages to coax a shy Young Chop onstage; Ross doesn’t budge. Instead, he plays host to DJ Khaled and Meek Mill, who have just arrived.