Black music is at a curious juncture. It’s never been more widespread or fragmented: radio stations and music blogs war over programming lists, polarizing projects are deemed both “the best major-label debut in recent memory” and “the worst album of 2012,” and artists who once carried the weight of the entire culture seem to be losing interest by the day. Tune into BET’s video countdown 106 & Park on any given weekday and the singles being voted on by America’s black youth are all but unrecognizable on the national scale. And on top of it all, a steady stream of music critics, consumers and lovers across racial, economic and cultural demographics have poked and prodded at the idea of “black music” altogether, challenging whether the concept itself is antiquated.

Somewhere within this debate (or outside it, depending on your vantage point) stands the Robert Glasper Experiment’s Black Radio. Released early last year, Glasper’s hybrid jazz/hip-hop/R&B Blue Note release was billed as a commentary on the fissured relationship between the different strands of black music. The album was both widely celebrated and criminally underrated, snagging a 2013 Grammy nod for Best R&B Album while still flying under the mainstream radar.

But there was no sign of underdog status at a packed SOBs in New York City Thursday night, where Glasper and his band entranced a diverse crowd of jazz nerds, hip-hop enthusiasts, after-work couples and curious voyeurs. Glasper is notorious for bringing out surprise guests from his dense Rolodex of collaborators, including Erykah Badu, Mos Def, Lupe Fiasco and Mr. West himself. Alas, this wouldn’t be one of those nights: “Any more friends here?” one audience member shouted between songs. Glasper quipped with a smirk, “Hey, this ain’t MySpace!” 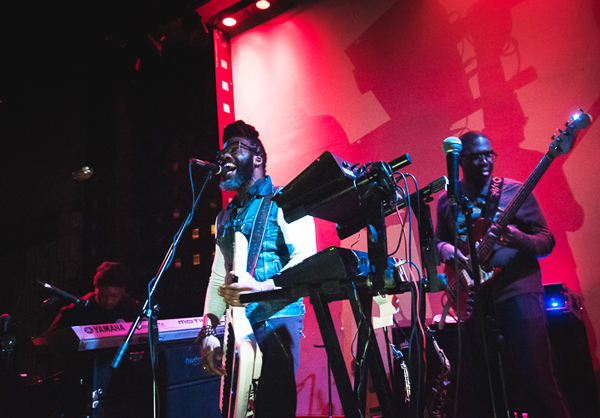 Glasper and co. held down the proceedings without any help, stringing together a riveting set of cuts from Black Radio as well as hints at jazz standards and covers of everything from Andre 3000’s “Prototype” to Jay-Z and Kanye’s “No Church in the Wild.” Frontman Casey Benjamin pinched falsettos through heavy vocoder effects, and drummer Mark Colenburg snuck 808 handclaps under TIK-i-tah TIK-i-tah snare fills, recreating much of the analog/digital blend that makes the album so agile.

On either end of long elaborate solos from each member, outbursts of applause from the crowd signified the start of fan favorites like “Ah Yeah,” BR’s pop-leaning duet between Musiq Soulchild and Chrisette Michelle that carried the album onto Quiet Storm programming slots across the country, and “Move Love,” fronted by R&B trio KING and boasting soaring harmonies and crunchy snares reminiscent of the late J. Dilla.

Dilla is one of Glasper’s most apparent inspirations and the bridge for many hip-hop fans to his music, and the mere mention of his name prompted major cheers before the group slipped into a cover of Dilla’s “Stakes Is High” instrumental. The set closed with their explosive cover of Nirvana‘s “Smells Like Teen Spirit,” with Kurt Cobain’s lyrics gaining an entirely new context streaming soulfully over keytar and Rhodes. 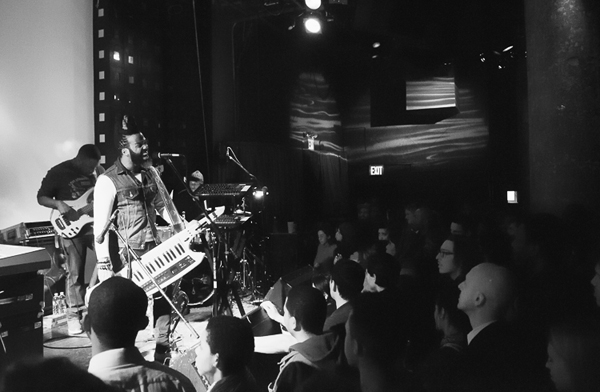 Despite the heady source material, Glasper doesn’t come off as an elitist. His onstage presence was lighthearted and humorous, a welcome twist in a genre that often takes itself too seriously. From ironic bellydance hand-twirls over a cheesy psychedelic background projection to an impromptu freestyle session that was quickly cut short (“We’ll save that for Black Radio 2. I’m gonna battle all my favorite rappers, cause I’m so dooooope“), Glasper kept spirits high and vibes loose. After the set, fans flocked to the band to take photos, talk music and express thanks. “You all are the reason Black Radio has been able to do what it’s done,” Glasper professed, and his admirers were proud to take credit.