1. Parquet Courts, Sunbathing Animal
Too many excellent albums this year for a mere Top 10 — 2014 was the kind of music year where I’d wake up in the morning already excited about the first song I was going to play. And it was usually one of these Parquet Courts songs. (Today it was “What Color Is Blood.”) Instead of rehashing their own totally rehashable formula, these Brooklyn-via-Texas jesters made Sunbathing Animal — playful yet frantic, sarcastic yet psychedelic, with boyishly enthusiastic twin-guitar drones (“She’s Rollin'”) and mock-hardcore aggro (“Sunbathing Animal”) and mystic sex-priestess reverie (“Raw Milk”) and boho rants about how nobody cares if you’re good at juggling oranges (“Ducking & Dodging”). They had so much mojo left over, they banged out the quickie victory-lap sequel Content Nausea. There’s a new rock & roll twitch in Parquet Courts’ guitar buzz, maybe because they’ve started writing songs about girls. But their guiltiest secret might be that they actually love being a great band.

2. Taylor Swift, 1989
All the lonely Starbucks lovers, where do they all come from? All the lonely Starbucks lovers, where do they all belong? Taylor’s synth-pop gem is a mess of gauche emotions cranked to stadium levels without losing any of their eccentricities. I love how the weepiest ballad (“This Love”) also contains her funniest self-mocking barb: “I could go on and on, and I will.” Oh yes, she will. The much-maligned “Welcome to New York” is in the proud tradition of Joe Jackson’s “Steppin’ Out” or Bowie’s “Jean Genie” or the Clash’s “Lightning Strikes” or any number of great “welcome to New York” songs by dazzled outsiders. (And here’s to the sophistos who worry about Taylor’s street cred when theirs consists of making it through Just Kids once. Concrete jungle wet dream tomato, you guys!) Tay can go back to singing about scarves and autumn leaves any time she wants, but 1989 was the right Next Mistake to make this time.

3. White Lung, Deep Fantasy
“You say it’s vile/You say it’s vile/You’re right!” Well, okay then. Punk desperado Mish Way likes to punch a song in the face, then escort it through the window, leading her band of Vancouver marauders through anthems like “Face Down” and “I Believe You.” Deep Fantasy is a jolt of fury and conflict and feminist ardor — and Way’s world-devouring snarl tends to make other singers sound a little tongue-tied.

4. Young Thug & Bloody Jay, Black Portland
The inside of Thugger’s brain is a strange and smoky place — no wonder he’s the first artist in history to crack the Top 40 with a boast about yawning during sex. I love all the mixtapes I’ve heard, but Black Portland is my favorite, full of hair-trigger swerves like the moment when he mutates into Mick Jagger as he sings the hook of “4 Eva Bloody,” or when he cackles, “I spend all of my money on divas.” 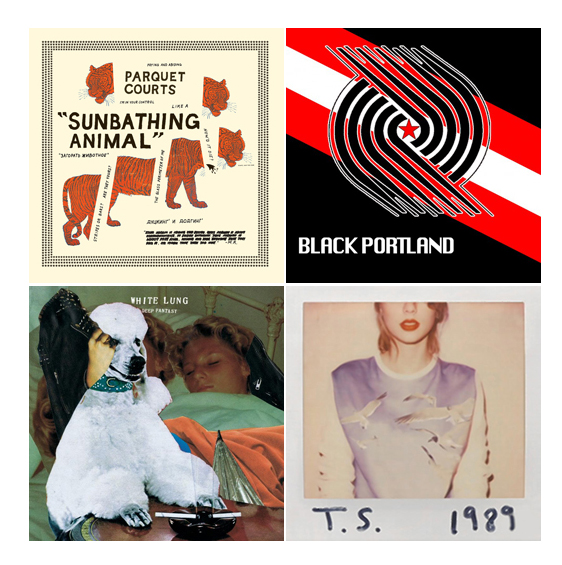 5. Perfect Pussy, Say Yes to Love
Say yes to love; say goodbye to sanity or peace of mind. Singer Meredith Graves seems to prove Judy Garland and Henry Rollins were secretly the same person, as she vents her “I want to fuck myself/I want to eat myself” torment. These hardcore kids from Sewercuse rage through love songs that feel mighty real because most of the time they’re barely even songs. All the noise and feedback builds to the emotional payoff of “Interference Fits,” where the holler-along climax — “Since when do we say yes to love?” — gives you fair warning you still have time to turn and run.

6. Sharon Van Etten, Are We There
In his classic 1975 book Mystery Train, Greil Marcus writes an imaginary ad for Mick Jagger: “His songs are loud, brutal and mean, containing feelings you like to pretend you do not have, recollections you would like to forget and temptations that up until now you have wisely avoided.” That’s a near-perfect description of this Sharon Van Etten album, except the “loud” part. Every melodic detail seems to lure you into a world of disastrous romantic fantasies indulged and paid for in full. Song after gorgeous song, it adds up to the story of two lovers who would gladly trade a kidney and a half for the chance to fall out of love. Scary and soulful shit.

7. Radiator Hospital, Torch Song
Nobody does you-don’t-love-me-yet songs with the wit of Sam Cook-Parrott. Listen to how he mumbles his way through the pop-punk nugget “Midnight Nothing,” sitting in a woman’s car, listening to a mix tape another woman made (“there were some songs that I wouldn’t have chosen,” oh really) and managing to lose both women in under three minutes. If Phil Collins ever decides to come out of retirement and reclaim the top of the charts, he needs to cover “Sleeping House.” Feelings? So had!

8. D’Angelo, Black Messiah
D’Angelo returns from the studio catacombs, bearing music for a world that was more than ready. (“Devil’s Pie” is 16 years old now — the same age Smokey’s “Cruisin'” was when D’Angelo revived it on Brown Sugar.) It might be cheating to list Black Messiah, since it’s only existed for a week, but you can’t deny it was one of the best things to happen to the world this year, even if we’ll all need 2015 to absorb it. What’s that line in Interstellar? “The only way humans have found to move forward is to leave something behind”? Glad D’Angelo came back for this.

9. Mannequin Pussy, Gypsy Pervert
Inspirational song title: “Clit Eastwood.” The only album of 2014 I purchased in three formats — cassette, vinyl and download. I caught Mannequin Pussy almost a year ago, opening for Tacocat, liked them enough to buy the tape, then kept on playing this 10-song, 18-minute, no-filler brat-punk implosion, relishing Marisa Dabice’s guitar more and more. That’s how rock & roll is supposed to work sometimes, right? Start with the shoegaze crush song (“Someone Like You”) or the heavy-breathing lust song (“Terror No”). You’ll keep going.

10. Protomartyr, Under Color Of Official Right
The party-killer album of the year. “Come and see the good in everything,” sneers Joe Casey, a Detroit player who sounds like he hasn’t seen the good in a damn thing since he heard his first Silkworm record. The guitar has the same acerbic after-hours humor as the vocals, loaded with booze and Catholic guilt. In songs like “What The Wall Said” and “I Stare At Floors,” Casey plays the night-crawler at the bar you inch away from, waiting for him to take a swig so you can bolt for the door.

11. Lana Del Ray, Ultraviolence
Lana is crushing it as a lyricist — she’s up there with Martin Fry in 1982, Bryan Ferry in 1972, Courtney Love in 1992. And she’s gotten stronger as a vocalist, almost up to Melissa auf der Maur levels. Her so-sad-today voiceprint fits these brilliant songs, though Bryan Ferry could have warned her about trying to cover Nina Simone. Speaking of covers, Bryan — get moving on “Fucked My Way Up to the Top.”

12. Alex G, DSU
I know nothing about home-taping troubadour Alex Giannascoli, except that I certainly didn’t plan on spending so much of my summer with the losers and grifters and suckers he sings about. His tunes evoke kindred spirits like Elliott Smith, Smog or East River Pipe, but the main attraction is the electric beauty of his noise-guitar blurts in “Axesteel” and “After Ur Gone.”

13. Toni Braxton & Babyface, Love, Marriage & Divorce
Gentle suggestion: If you spent more of 2014 pondering Mark Kozelek’s midlife angst than Babyface’s, you are doing it wrong. Get a late pass, okay? Two R&B soulmates (Toni calls Face “my musical husband”) reconnect for a predictably slept-on concept album about growing up, getting your heart gouged out, watching your dreams go down in flames, clinging to the friends who stand by you. The songs don’t come as easy for these two as they did back in the “Unbreak My Heart” days, and sometimes the strain shows, but that’s part of the story they’re telling. Someday you will ache like they ache. 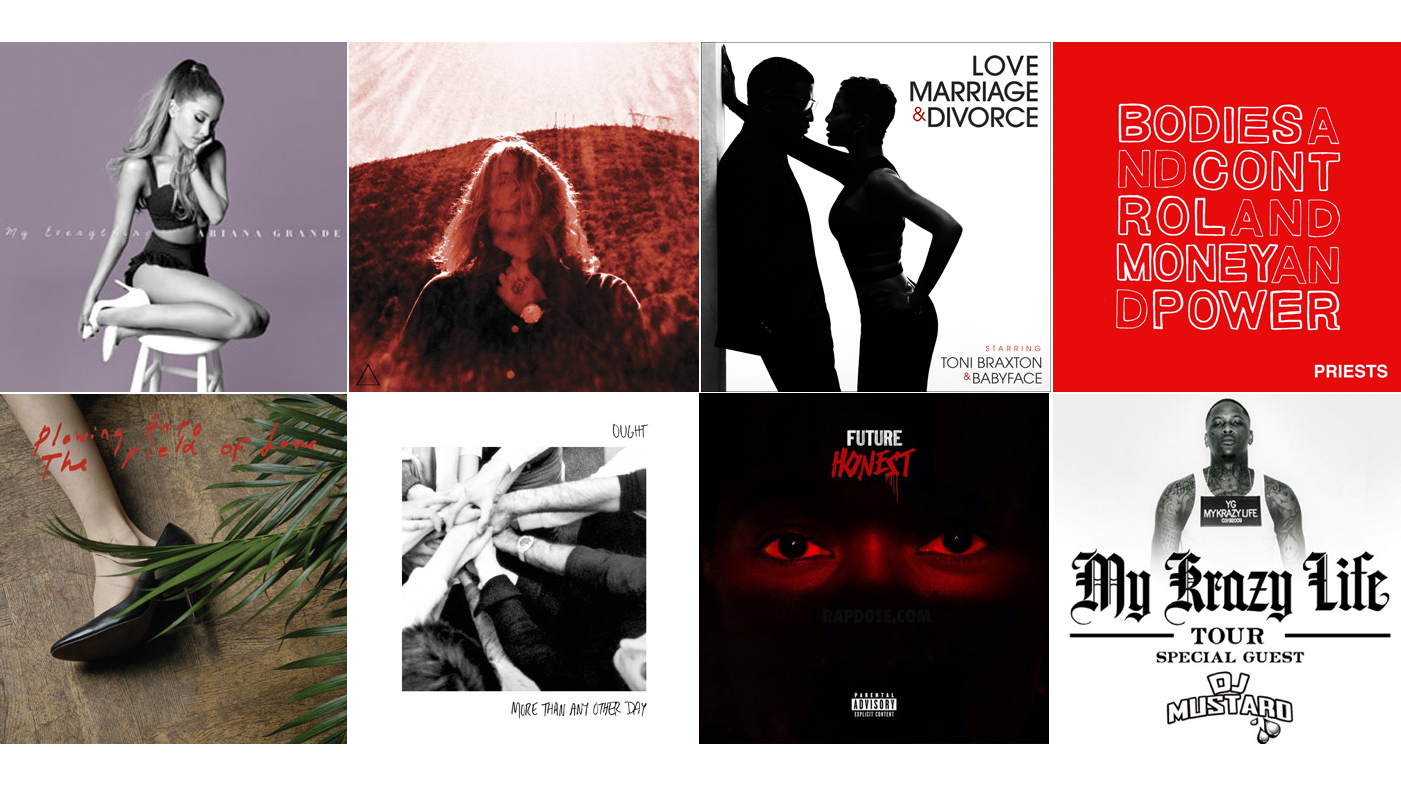 14. Ty Segall, Manipulator
An alternate history of glam rock where Marc Bolan doesn’t fade off into an alcoholic haze after The Slider — instead, he hires Bowie’s cast-off Spiders From Mars band to make his own Ziggy Stardust. (Or in “The Hand,” maybe his own Houses of the Holy). Metal guru Ty Segall plays nearly all the instruments, overdubbing himself into a shaggy-ass arena band. Best awesomely pointless guitar solo: “Tall Man Skinny Lady.”

15. Ought, More Than Any Other Day
This Montreal postpunk collective can sound jubilant, pissed, down-hearted — but mostly relieved they can feel feel anything at all. Tim Beeler sings like David Byrne and scrapes his guitar like Robert Quine, in songs about fighting for emotional sobriety after breaking old connections. “Habit” was one of the year’s best songs for falling asleep to, “Gemini” one of the best for waking up — two vastly different tunes about living with wants and needs you can’t comprehend. But there’s a brotherly warmth in the way Beeler sings about it: “If there’s something you’re trying to express/Express it with me.”

16. YG, My Krazy Life
Two minimalist talents — Compton roughneck YG and Midas-fingered beatmaster DJ Mustard — combine to make a wide-scale narrative for yet another G-funk era. YG stretches all the just-wanna-party bangers into a criminal-minded rise-and-fall story, over those ubiquitous Mustard beats.

17. Iceage, Plowing the Fields of Love
Seeing Iceage live back in May, I kept laughing and wondering whose songs they were covering. Where the hell did they find that goth-rockabilly tune about seeing your first pair of high heels and getting your first taste of wine? Turns out these were just fantastic new Iceage songs. Elias Bender Ronnenfelt moans grand ballads about getting his punk ideals corrupted and loving all the agony of it.

18. Future, Honest
Favorite scene in Interstellar: The astronaut gazes upon the wormhole and says, “It’s a literal heart of darkness!” If that’s Plan A for the survival of the human race, I literally vote for Plan Z. Oh, and this Future record? A literal heart of darkness! Even in the year of Young Thug, the ATLien rocket man still sounded like he was floating through his own galaxy.

20. Ariana Grande, My Everything
The mega-pop robo-vixenette of the future. Who else could blow up in the “Problem” video with a Bardot ponytail and Edie go-go boots, despite the uncontrollable urge to keep caressing her own face while singing? Who else would don a pair of cat ears to travel the highways of hell, where a girl must go to “become who I really are”? Who else can come on like the claymation fawn in a Christmas special while dating the rapper who uttered the words “Build a house up on that ass, that’s an ass-state”? And though the title “Love Me Harder” might make you suspect the worst (like the old Onion article where Britney explains her new hit “Take Me From Behind” is about “true love sneaking up on you”) it’s just part of Miss A’s strategy to be all things to all pop fans, the latest twist of which is her Nicki duet “Get On Your Knees.” My Everything could have been a mere state-of-the-art hit showroom, but it’s so much more, because Ariana is so much more authentically nuts than even her jumpiest handlers could have feared. We’re lucky to share this year with her.