Fifty years after the Beatles permanently retired from the road, Ringo Starr can’t seem to get enough of it. On June 3rd, the perpetually youthful stickman launched a month-long summer tour across North America with his All-Starr Band. Starr has eschewed arenas for more intimate venues, giving the gigs the informal feel of a Liverpool rave-up. “I love these old theaters,” he told Rolling Stone during a sitdown at the historic Capitol Theatre in Port Chester, New York. “Mainly because I can see everybody!”

That certainly wasn’t the case with the Beatles’ final live performances, which saw the foursome relegated to enormous stadiums where audience synergy was all but impossible. This detachment was a major factor in their decision to quit touring, but reestablishing the link with his first All-Starr Band in 1989 has had a restorative effect on Starr. “I play because this is what I do,” he says. “I love to play, and I’m still playing. I’m playing with great musicians, singers, and writers. So, I’m blessed I’m still doing it, really.”

Ringo Starr on the Time Muhammad Ali Picked Him Up

His current band, the 12th and longest serving line-up of the All-Starrs, boasts luminaries including power-pop wizard Todd Rundgren, Toto’s Steve Lukather, Richard Page of Mr. Mister, and Gregg Rolie, fresh from a reunion with Santana. They accompanied Starr on his previous outing last fall, and are slated to do so on an upcoming trek this autumn.

When he’s not bringing music to the masses, he can usually be found in his home studio in Los Angeles, working on a new album with a little help from his rock-star friends. Rolling Stone caught up with Starr in his dressing room to discuss the new songs, the new tour, his old band (you know the one) and the passing of George Martin.

You just kicked off your summer tour with the All-Starrs. You’ve been with this lineup for quite a while now. Four years?
Four years and one week! We’ve been saying four years and Todd [Rundgren] worked out we’re in our fifth year now by a week.

What do you look for when you’re putting a group together? How do you know you’ve found one that’s right?
I never know if the All-Starrs are going to work ’til we get to rehearsals. I know in my head, “Well, we’ve got this guy, he’s got these great numbers. But we need a bass player!” Bass players are usually the most difficult. That’s why Richard [Page] has been with me for years now. He has such beautiful songs. Then Gregg Rolie was the find – he’s so great. And that’s how I do it. We know everyone can play. But when we turn up at rehearsals, that’s the only time we know. What’s great with this band is that we really jell as human beings. I have had some All-Starrs where everybody wasn’t as excited as I was [laughs]. 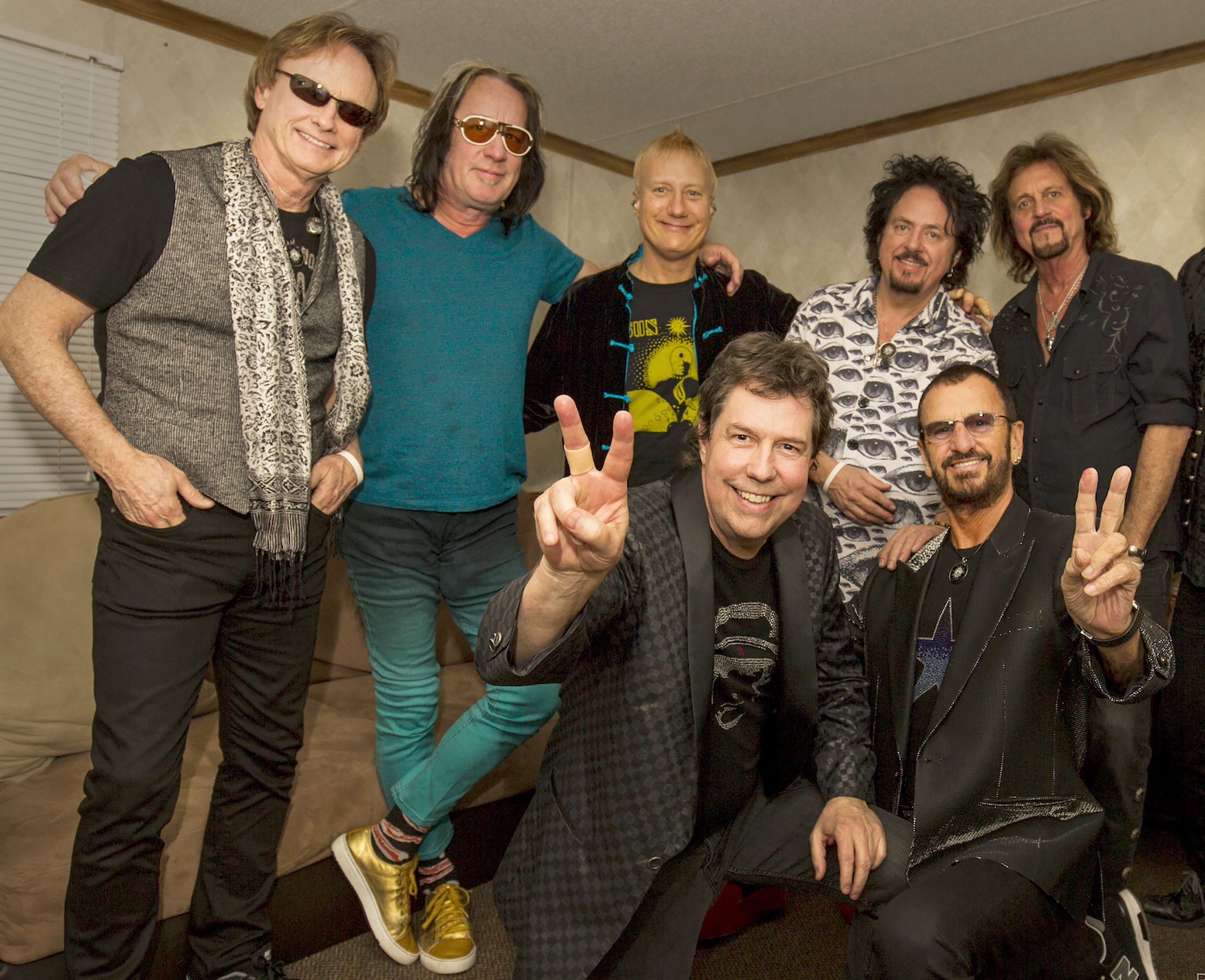 That’s not good.
No, but they had good songs. I’d change up the band, anyway. I change the band quite a lot. I mean, the first band [in 1989] was incredible. I was so nervous. I was so insecure, I had three drummers: myself, Jim Keltner and Levon [Helm].

Why were you nervous?
Well I’d never done it before. I have a moment of nervousness every night before I go on.

Really? Even now?
That’s why I run. You’ll see I always run and grab the mic. And then I’m fine! I always wish I could have this cool Frank Sinatra attitude and stroll on. But I haven’t been able to achieve it yet.

I’ve heard the longest walk in the world is from the wings to the mic.
It is. So if you run it’s a lot shorter.

You’re working a new album at the moment. How far along are you?
We’re well into it now. This year for a change I’m doing a five-week early-summer tour and then a five-week autumn tour. I’m breaking it up a bit. So I’m gonna try to do a lot more on the album before October. Then whenever we get back at the end of November I’ll try to get a bit more. I’d like to have it finished by January, but we’ll see. Maybe it’ll be March [laughs].

Who do you have on board so far?
So far we’ve got Van Dyke Parks. He’s been on the last six albums, I think. He’ll come over and we have a cup of tea. I’ve got a line, usually, which is all you need. A line and an idea and then we’re off. Steve Lukather and I have two songs going. We know the titles and we have a verse for one of them. He’s put great guitar on, and I’ve put great drums on – now we’ve gotta write the damn song! [Laughs]

How has your writing process evolved over the years?
The way I’ve been working over the last several years is that I do sort of a rhythm-pattern synth track. And then I play drums and go, “Oh, there’s a verse. Oh, that sounds like a chorus.” And then I call writers in and say, “Let’s write something to that!” And ProTools is so great. I can only play in C, but the songs could be in F sharp, E minor, or whatever because it’s the press of a button. So that’s what I’m doing. Richard Marx is part of it, Glen Ballard and Dave Stewart.

Dave and I always write the Liverpool song [e.g., “Rory Storm and the Hurricanes,” “In Liverpool,” “The Other Side Of Liverpool,” “Liverpool 8”]. In January we were talking about doing a country album, him and I, and going to Nashville to record it. You can do it pretty quick in Nashville – there’re a lot of players. So we thought we’d write several songs before we got there. We wrote this early country song. And then I was offered this tour at the same time, so I’m going on tour. I can always do the country record later. But I’ll probably put [the song] on this album, we’ll see. We wrote this real country, old-style sad song.

You produced your last album [Postcards From Paradise] yourself. Are you doing it again this time around?
Yes, [but] producing is easy. I have these great players, and they know what to do. Everyone kicks in. In the end, I just choose: “Oh, that works well. That works well.” We get some singers in and some backing vocals. Usually a lot of the players do the harmonies anyway. Ben Harper was passing by one time. The track [“Peace Dream”] was nearly finished and he said, “Oh, I think I’ve got something for that!” And he went in and did a great harmony. And a couple years ago I had Paul [McCartney] come and play bass and he said, “I think I’ve got something for that,” and he put on a vocal line [on “Walk With You”]. So it’s easy like that. It says “Producer” on the record, but a lot of people are giving ideas.

Do you recall any production tips you learned from [Beatles’ producer] Sir George Martin?
Not really, but I suppose, subliminally, everything – you know what I mean? But I don’t think, “Oh, George would have done this,” or “That’s how that goes.” I just get on with it, really.

My condolences for his passing, by the way.
He was great, and kind, and loving. And understanding of four punks from Liverpool. At the beginning he was the boss. It was so crazy, he was the only man who could press record. 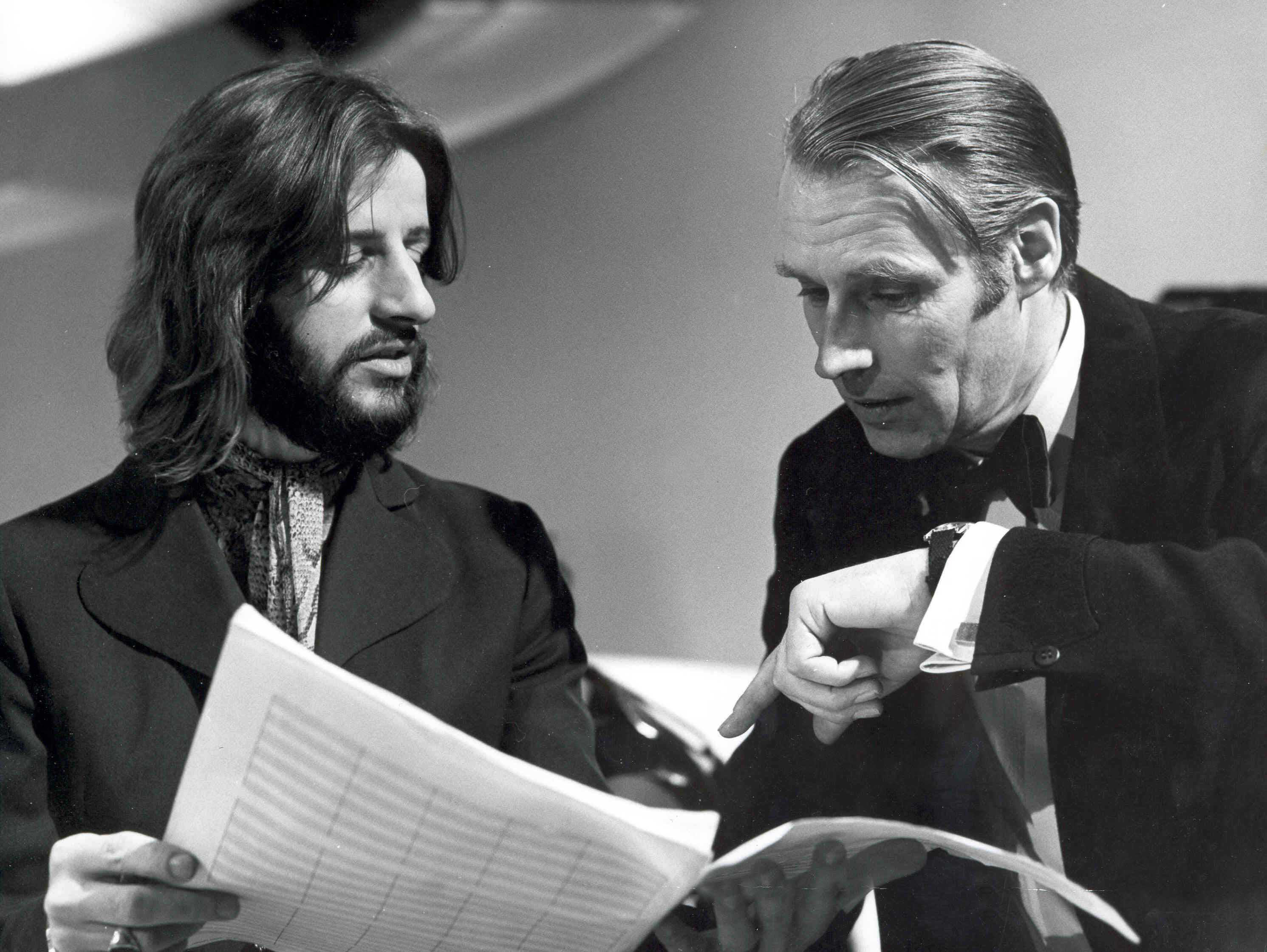 You mean literally press the record button?
He was the only man who could press record! We’d run through it and he’d have his engineer. And then George would come in – [mimes pressing a button, laughs]. But then we grew with each other. He would present songs for us to do. It was very ballsy of us as a new act to think, “No, no, we want to do Lennon and McCartney songs. We’ve got our own.” He’d bring us songs from other writers, because that’s how it was – you had the writers of songs and the singers of songs. So when we came up, we had the writers as well. After four or five suggestions of these other tracks, he got the message. But everything he gave us was a hit for someone else! But it was good. And those boys wrote some great songs.

Yes, they did. In what ways did George Martin help realize some of those songs?
We were buskers; George could actually read music. So if John wanted a violin, he could write it down. And of course he’d also suggest music on top of the band. We sort of always worked the band out ourselves. Anything else on top, we would rarely get involved.

Is there a particular song that you feel was brought to another level by George’s arrangement?
I think he was always at a higher level. I don’t really feel like, “Oh, that one.” It’s all to do with the record. It could have been the song; it could have been what we play; it could have been lots of things. But we were a great match. We were lucky to get him, though we felt Parlophone [Records] wasn’t rock & roll. But we were just so thrilled to get a record deal.

Because he had mostly worked with Peter Sellers, Dudley Moore and people like that before you came along?
Right, all he had were comedians! He was the only one in London who would take a chance on us. And you know the rest. …

The Beatles’ Cirque Du Soleil show, Love, is being updated for its 10th anniversary this year. It doesn’t seem like it’s been that long.
It’s crazy for you – what about for me? Wasn’t I just there? But the good news is, it’s great! Not the new one, I haven’t seen that. But I saw the other one twice. But we’re all gonna go [Paul McCartney, Yoko Ono and Olivia Harrison] and see what they’ve done in July.

Were you involved with the updates?
No, I was not.

You weren’t choreographing the somersaults and backflips?
No, please! [The soundtrack is] another legacy George Martin left. He knew where everything was on those tracks. So we mixed up some things. We’d take something from this track, and put it with a different take instead of the one we used. [George Martin’s son] Giles put it together and he did an incredible job.

For someone who’s achieved so much, do you have any insight into happiness and fulfillment that you could share?
I’ll tell you when you turn the tape off [laughs]. I honestly truly believe if we spread peace and love, one day it will be worldwide. I get put down sometimes for saying “peace and love.” “Oh, he’s peace-and-love-ing again.” Some people have nothing better to write about.

But the other side of that coin you were talking about is that I play because this is what I do. I love to play, and I’m still playing. I’m playing with great musicians, singers, writers. So, I’m blessed I’m still doing it, really. And Paul’s out. We’re old-school. We’ve played clubs; I’ve played weddings for beer (but not now). We like to think we’re 24, but we’re a bit older than that now.

You’ve got a birthday coming up in July.
If you could make some sort of note letting people know that on July 7th at noon, Ringo would love for his birthday for everyone – no matter where you are – to put the peace sign up and go, “Peace and love.”