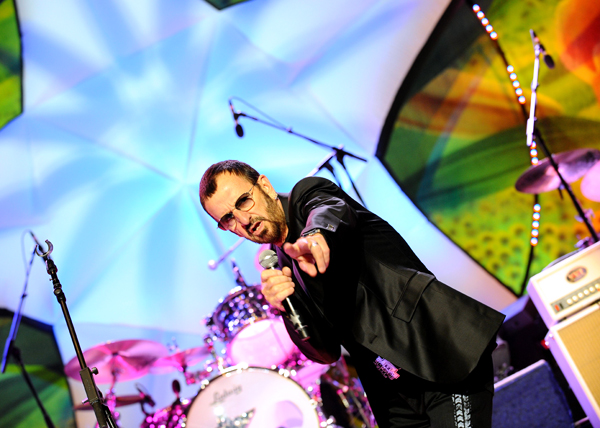 Ringo Starr has announced the line-up for the newest All Starr Band. It will feature Todd Rundgren, Gregg Rolie (Santana), Steve Lukather (Toto), Richard Page (Mr. Mister) alongside saxophonist Mark Rivera and drummer Gregg Bissonette. The tour launches June 14th at the Fallsview Casino in Niagara Falls and runs through July 21st at the Greek Theater in Los Angeles – though a press release states that more dates will be added. Ringo is touring in support of his new album Ringo 2012.

Ringo began touring with a constantly rotating crew of All Starr Bands in 1989. Countless musicians have been in the mix over the years, including Joe Walsh, Levon Helm, Jack Bruce, John Entwistle, Sheila E and Paul Carrack. The musicians come from a wide variety of musical backgrounds, but they were all the lead vocalist on at least two big radio hits. The setlist mixes in those songs with hits from Ringo’s solo career and a handful of Beatles classics.

Todd Rundgren and Richard Page have both participated in previous All Starr Band tours, but this is the first outing for Steve Lukather and Gregg Rolie, who was the lead vocalist in the original line-up of Santana. In 1973 he co-founded Journey with Neal Schon. He left the band in 1980.

Here is our best guess at what this year’s setlist will look like:

Here are the tour dates: