To promote her new album, Unapologetic, Rihanna has set off on an ambitious globetrotting tour that will hit seven countries in seven days. Rolling Stone contributor Jeff Rosenthal is on the plane with a small army of fans and assistants, and an extravagant amount of champagne.

The weekend before the 777 Tour began, while at Rihanna’s listening party at New York’s 40/40 Club, I had a conversation with an industry heavyweight who asked if I was excited for the trip – a quick tour of seven countries alongside one of the biggest pop stars in the world. I responded with a tempered yes – we agreed that it could go either way: “It’ll be either the best or the worst.” In a somewhat cruel twist of fate, this trip has been both of those things.

Rihanna’s performances have been solid, and – aside from her show in Paris, which weathered through tech problems – they’ve gotten steadily better as these nights have gone by. That first plane ride to Mexico City (when she walked around, sloshing champagne and cognac, cooing into the microphone about getting crunk) was for many a rare bit of access to a celebrity, a once-in-a-lifetime experience, a story to go home with. The hotels have all been incredible: Le Meridien in Paris, just steps from the Champs-Elysées; Stockholm’s futuristic Radisson Blu the night before. We’ve been plied with gifts and bags of Rihanna-related products: bottles of her perfumes, an R-branded Moleskine, a Q-Tip sized conflict-free diamond, a pair of socks with Rihanna’s face on them. Def Jam’s ever-present staff has done its best to meet the needs of a too-large operation. The amount of money spent on this whole thing could sink a boat.

Or, in this case, a Delta. It feels stupid to complain: we’re being flown all around the world to see Rihanna perform in concert seven times, and given free tickets with balcony access. That probably sounds pretty good! But it’s too much. Every concert is a re-run episode that we’re forced to watch, each with diminishing returns. The only real difference is found within one of her most popular applause lines: “What up, Mexico City?” “What up, Toronto?” “What up, Stockholm?” The buses are new in each city, which is important since we don’t do much outside of them. We got to see Stockholm and Paris for an hour before we had to go to the venue; we never saw any of Toronto or Mexico City. There’s no time to see the sights when you’re sitting in parking lots, waiting for hours. As it is, the only proof we have of going to these cities are the adhesive strips wrapped around our luggage. A documentary crew has been wandering the aisles for many of our plane rides, but there’s simply nothing to capture on camera. Their most popular shot? People sleeping.

We haven’t seen Rihanna offstage since the first day, unless you count her popping up at baggage claim for a few moments on the morning of the second; she also had after-parties in Stockholm and Paris, both times showing up mere hours before wake-up call. As for last night’s mega-party at Paris’ VIP Room, where she was joined by Diddy, Cassie, Pharrell, Akon, Omarion and Craig David, the Twitter account for MSN’s Canadian website said, “Putting off sleeping and editing to try and get a word with Rihanna, Diddy or Akon who are 2 feet away but blocked by security.” (It was originally going to be just us, those who were flying with the tour. Def Jam was surprised to see it turn into a zoo. There was a hubbub among the radio winners this morning, after one of the Swedes got elbowed in the face by Diddy’s bodyguard, according to several eye-witnesses.) The hotels are beautiful, but we’re only sleeping two or three hours in them –  four, tops. From journalists to fans to label reps to airline staff, the general feeling is one of mild depression-cum-hysteria. 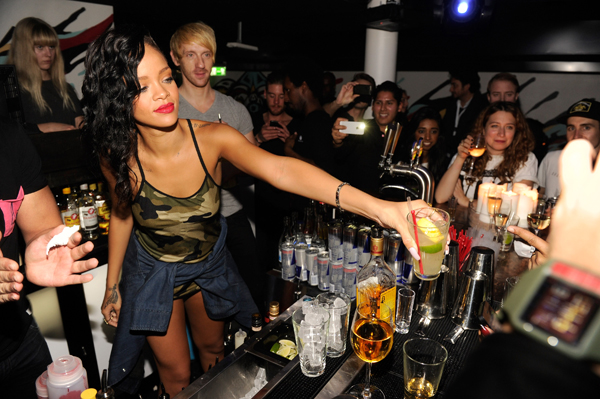 It was a cunning idea to invite 200 journalists to cover this event, because – if it goes well – that’s seven straight days of wall-to-wall positive coverage by 150 outlets. But when it doesn’t work, it’s a big risk. After four and a half days, it’s somewhere between a wasted opportunity and living in Rihanna jail. If this whole thing is Rihanna’s idea, as she so claims, then you’d think she’d put in the effort to make it work: she could get on the microphone, or do something to make us feel like she’s on the same plane as us, to differentiate one day from another.

The saying says, “Go big or go home.” At this point in the trip, it’s not really a close call.