Beyoncé and Rihanna have both been recording relentlessly since they were teenagers – and have both become major worldwide pop stars on the strength of a steady flow of hits rooted in R&B and funk. Based simply on their seeming omnipresence, it would seem that both singers have had a very good 2011, but upon closer inspection, it’s clear that the two stars are at very different places in their career: While relative newcomer Rihanna, 23,  is still in the process of establishing herself as a superstar with an onslaught of singles in a bid for total radio domination, record industry veteran Beyoncé, 30, is using the clout she has accumulated over the past decade to pursue a more personal vision with her most recent material.

The result? Rihanna has appeared on eight hit singles  in 2011 alone, and her most recent smash, “We Found Love,” has been at the top of Billboard’s Hot 100 for six consecutive weeks. Meanwhile, Beyoncé’s 4 has been considered a commerical flop despite having sold just shy of one million copies in the United States since late June.

4 , Beyoncé’s first record since dropping her father Mathew Knowles as her manager, has connected with the R&B star’s hardcore audience, but has not spawned a monster hit on the scale of, say, “Single Ladies (Put A Ring On It),” “Halo,” “Irreplaceable” or “Crazy in Love.” Her last major release, I Am…Sasha Fierce, is nearly triple platinum three years after its release in 2008; the album before that, 2006’s B’Day, is certified triple platinum. To some extent, the commercial performance of 4 was diminished by the early, lukewarm response to the disc’s first single, “Run the World (Girls),” an aggressive tune that sampled Major Lazer’s club hit “Pon de Floor” and leaked in an unfinished form prior to its official release.

“Sometimes when songs aren’t obvious hits it takes a video, a live performance, or something extra to help it connect to the audience,” says Julie Pilat, Assistant Program Director and Music Director for KIIS FM and Program Director of 98.7FM. “Radio immediately supported Beyoncé, but there were really polarizing opinions from the listeners on the single. Her video, appearances and performances didn’t kick in until it was too late and the song was over. ‘The Best Thing I Never Had’ was probably the most obvious single on the album, but it was a ballad and got released in the middle of summer.”

The modest success of 4’s singles at radio may be a sign of the times, as the sound of pop has shifted drastically in favor of techno-oriented dance music over sounds rooted in hip-hop and R&B in recent years, a development that has dovetailed with Rihanna’s gradual immersion in full-on club music. Though she began her career with roots in dancehall and R&B on songs like “Pon de Replay” and “Unfaithful,” she has moved towards full-on house music with hits like “Don’t Stop the Music” and “Only Girl (in the World).” Her biggest hits over the past year – “S&M,” “Who’s That Chick” with techno producer David Guetta, “We Found Love” with Scottish dance producer Calvin Harris – have wholeheartedly embraced radio’s current craze for dance music, which has been helped along by chart-toppers such as Lady Gaga, Black Eyed Peas and Katy Perry. (The mainstream embrace of dance music also has contributed to the genre’s thriving on the touring circuit, with festival-packing artists such as Deadmau5, Skrillex and Swedish House Mafia.) Much to her credit as an artist, Beyoncé has stayed true to her roots in classic R&B and is playing to her strengths, but at least in this moment, she’s out of step with prevailing trends in pop.

Rihanna’s incredible success at pop radio, outstanding digital track sales and overwhelming popularity on YouTube isn’t simply a matter of having her finger on the pulse of popular culture. It’s partly the result of unflagging momentum – there has been hardly any time since Rihanna broke big with “Umbrella” in 2007 when she has not had a hit on the radio, either as a solo act or featured artist. “Kids want new material all the time,” Jay Brown, Rihanna’s manager since she was a teenager, recently told the BBC. “I think you become disposable when you put out an album every three years.” This philosophy goes against the grain of years of conventional wisdom cautioning artists against flooding the market with singles, but the results are undeniable: Even when Rihanna drops a single that doesn’t quite connect with a larger audience, such as “Russian Roulette” or “Man Down,” there has always been a monster hit like “We Found Love” just around the corner, so she always seems like a hot commodity. 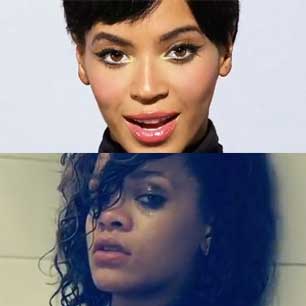 Though Beyoncé hasn’t gone very long without new material in recent years, there was a nearly 10-month gap between the release of her final Sasha Fierce-era single, the minor hit “Why Don’t You Love Me?,” and the debut of “Run the World (Girls)” in April. If anything, the singer’s frantic turnover rate in singles in the second half of 2011 has worked against her more than her relatively brief hiatus from the spotlight. Over the course of October, Beyoncé released music videos for three of the best songs from 4 – “Countdown,” “Love on Top” and “Party” – in rapid succession in advance of her new DVD, Live at Roseland. Though this strategy yielded some immediate attention, it kept those songs from gaining the traction necessary to break big as hits. Though each of these videos attracted a large number of viewers, their YouTube view counts are dwarfed by the clips for the Beyoncé songs that performed better at radio, or by videos for Rihanna songs that became radio staples.

The internet has had a significant impact on the way people consume music over the past decade, but radio ubiquity is still essential in breaking hits on a large scale. It’s too easy to ignore or simply never encounter content on the internet, so Beyoncé’s web-centric hits are focused mainly on an audience already inclined to pay attention to her every move. Since Rihanna’s hits are more difficult to avoid, they escape the echo chamber effect of the internet, where a song like “Countdown” can be intensely loved by a cult audience while never breaking through to the world at large. Even when a video goes viral, such as Rihanna’s controversy-baiting clip for “Man Down,” it doesn’t necessarily translate to sales or airplay. Though “Man Down” is by some distance the most-watched video either artist released in 2011, the song received modest radio spins – it was only serviced to select urban stations – and sold the least out of any of the singer’s singles this year.

That said, Rihanna still lags behind Beyoncé in terms of albums sales. 4 sold 310,000 copies in its opening week and debuted at Number One on Billboard’s album chart, while Rihanna’s latest, Talk That Talk, opened at Number Three on the chart in November with 197,000 units sold. This gulf is even more pronounced when comparing their previous albums – Beyoncé’s Sasha Fierce has sold nearly twice as many copies as Rihanna’s Loud. (In fairness, Beyoncé’s album has been out for longer, but both records have yielded a number of smash hit songs.)

This difference in purchasing patterns may speak to a generational divide not just between the two singers, but between their fan bases: Rihanna’s younger-skewing audience are accustomed to focusing on individual tracks having grown up on iTunes and file-sharing, while Beyoncé’s older fans are more conditioned to buy full albums. Beyoncé certainly encourages a more album-centric view of her work – all of her solo records have been organized around clearly-defined thematic conceits, and she went out of her way to present 4 as the product of a “year-long personal and artistic journey” in Year of 4, her documentary about the making of the album.

Beyoncé certainly isn’t alone in making old school pop records – Lady Gaga and Adele have both racked up blockbuster sales with their most recent albums, though both singers did so on the strength of radio hits such as “The Edge of Glory” and “Rolling in the Deep.” To her credit, Rihanna has been producing thematically unified albums in her own right – Talk That Talk is a tightly sequenced 37-minute set with an emphasis on racy lyrics, and Loud has been nominated for Album of the Year at the 54th Grammy Awards. This sort of validation may push the singer in the same direction Beyoncé has been headed – having proven herself as a major star, Rihanna may eventually choose to pursue a creative direction that isn’t in line with prevailing radio trends. As much as Rihanna’s success can be read as a shift in the marketplace, it could just be that she just hasn’t opted to use her leverage as a bona fide superstar to take the sort of risks Beyoncé has made in 2011.