On the subway after the Rihanna show last night at Brooklyn’s Barclays Center, three concertgoers met for the first time. One, a well-spoken and better-dressed woman, said, “I didn’t get the whole sex thing! It was too sexual. The first third, it was vulgar. She barely sang, she barely danced. I bet she was high. But oh my God, she looked beautiful.” Her two new friends looked puzzled; the woman continued.

“I’d give her an A. Not an A-minus or an A-plus, but a solid A,” she said. They all nodded. One of the others said, “This might be the best show I’ve ever seen.” When it comes to Rihanna, even when people don’t like her, apparently, they love her.

‘Rihanna 777’ Documentary Coming to Fox in May

In an age documented by photos taken in the mirror, Rihanna exists as a spirit animal, a validation of ego for the Selfie Generation. She’s cold, unapologetically so, a mousetrap in a Lanvin jumpsuit. Her body invites, but only as a matter of etiquette. Her eyes shoot middle fingers, and her tongue drips indifference. She demands aggressive and unreciprocated pleasure: “Suck my cockiness, lick my persuasion.” “I love it when you eat it.” “Make me feel like I’m the only girl in the world.” 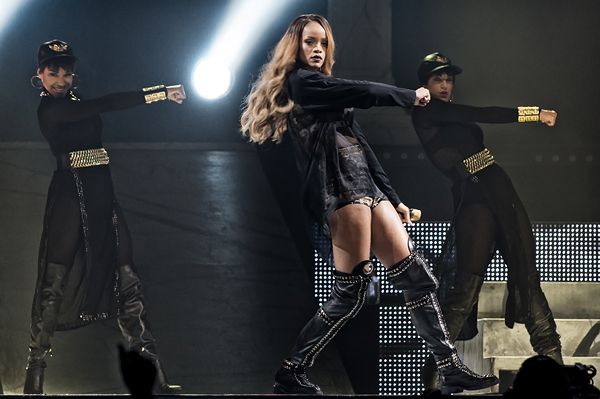 In her songs, she uses lovers to masturbate, moving them like toy soldiers across the battlefield. For her, it’s complete control or bust. In one of her few moments of audience engagement last night, Rihanna said, “Do we have anyone in the house tonight who hates love – who don’t understand that shit?” It was said as if obligatory. Traveling with 200 fans and journalists for a week, Rihanna walled herself off completely, uninterested in anything but her own cameras. (A heavily-edited documentary attempting to depict the 777 Tour will be airing tonight for an hour, but a more accurate portrayal would be a weeklong hunger strike without cause.)

Last night’s performance wasn’t necessarily fresh, but it felt on-trend: she wore custom outfits designed by Riccardo Tisci and Raf Simons (as inspired by his 1995 collection); she surrounded herself with a rhythm nation of Fly Girls in camouflage and Tupac bandanas. Ruff Ryder motorcycles smoked on screens, as did difference filters over eyeless photos of Rihanna, too. 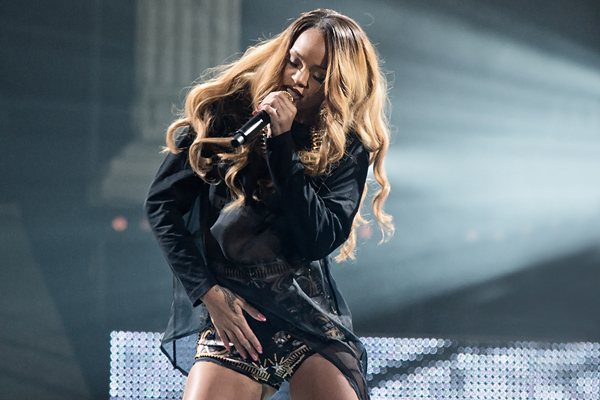 Every single one of these elements is owed to her opening act and probable muse, A$AP Rocky, the Harlem rapper who has popularized high-edge fashion in this world and brought VHS culture into the mainstream. Most who showed up were wearing what Rocky’s fans were wearing 10 months ago. Tellingly, she imitated Rocky’s dance move often, one in which he twists his wrists, pulls back his shoulders and bounces as if at a Greek wedding.

Regardless of the influences she adopts, it is still Rihanna at the center of it all, versatile and withering. Throughout the night, she used her hand like a cat its tongue, rubbing her thighs like she’s rolling out dough, patting her crotch as if slapping cheese on a burger. For “Phresh Off the Runway,” she slithered, high knees and pierced eyes, kicking her legs like a filly doing the Spanish walk. Late in the show, when performing “Loveeeeeee Song,” her current single with Future, the stage revolved around her; she looked small enough to fit inside a bottle. Her voice strong, she barely moved. Instead, she stood and posed, her slinky red dress – like her persona – revealing everything but really nothing at all.