The summer of 1984: Bruce Springsteen has just dropped Born In The U.S.A., blowing him up from superstar to mega-hyper-uberstar. “Dancing in the Dark” is a Number One smash. He and his longtime lieutenant Steve Van Zandt decide to celebrate with a trip to Disneyland. Except they get thrown out for refusing to take off their bandannas. As Springsteen explains, “This, say the powers that be, is so he will not be misidentified as a gang member, Blood or Crip, and fall victim to a drive-by while hurling his cookies on Space Mountain. Steven’s bandanna is neither red nor blue but an indeterminate hue, chosen carefully and precisely to complement the rest of his ‘look’ by the man who invented the male babushka.” They huff off to Knott’s Berry Farm instead – but can’t get in there either. So they give up and head to a fancy restaurant, where being famous means they can get a table in full rock-god drag. No retreat, baby; no surrender.

It’s a typically bizarre and delightful moment from an utterly unique, endlessly exhilarating, last-chance-power-drive of a memoir. Like a Springsteen show, Born To Run goes on forever – five hundred pages, no index – and leaves you worn out, yet fiending for one more one-two-three-four. He began writing it on and off seven years ago, for his own amusement, and dropped on the world as a surprise to cap a year of triumphant touring. Born To Run is not the Bruce Springsteen story –it’s another chapter in the lifelong story he’s kept telling for nearly 50 years, onstage and on wax, in his songs and between them, all over his interviews and liner notes and guitar solos. The tone is loose and rambling, full of all-caps punch lines and the exclamation points of a dad who loves to text. He skips over many of his best tales just because he’s already told them elsewhere. He goes light on the Hopes-‘n’-Dreams talk. This book is a guy telling stories to himself, trying to figure his deepest questions out. 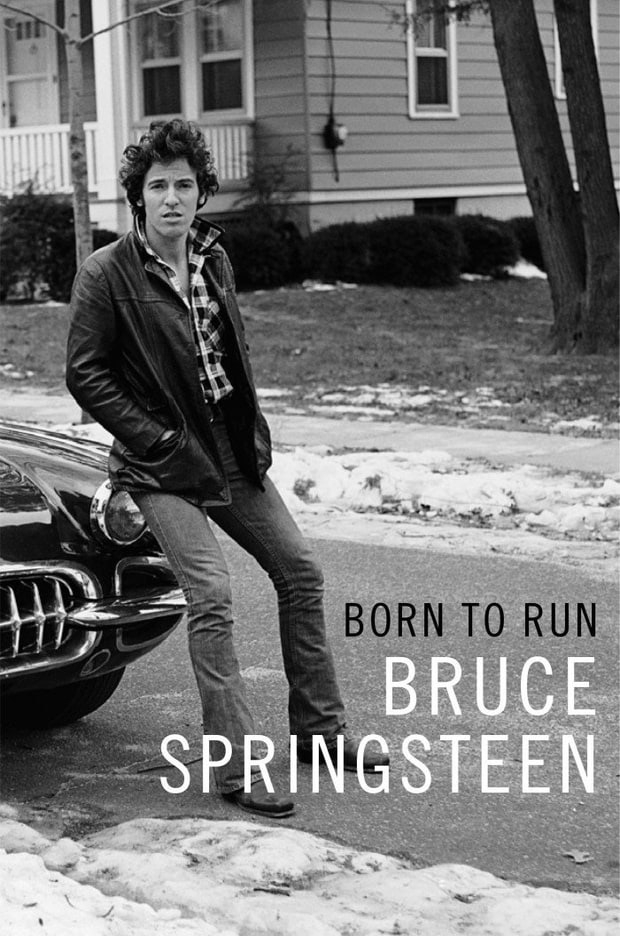 Born To Run digs into how this most ostensibly down-to-earth of rock stars still seems so maddeningly mysterious, so unfathomably complex, still driving himself and his band to keep topping themselves night after night. A few weeks ago in Jersey, I saw three marathon shows – four hours a pop – all beginning with the epic “NYC Serenade,” complete with string section. What kind of Captain-Ahab-times-James-Brown madness lashes a mortal man to put himself through this, knowing full well the crowd would be satisfied with 99-and-a-half percent? It turns out Bruce Springsteen doesn’t quite understand either. That’s why this book exists.

He goes deep on his childhood, in a blue-collar Jersey family of tough Italian women and brooding Irish men. His father looms largest over the book – a bitter, hostile, silent man who kept his solitary vigil every night drinking beer alone in the dark at the kitchen table. His “six-pack seances” still haunt his son, who’s spent his life trying to shake off that shadow. As he explains, “My mother would read romance novels and swoon to the latest hits on the radio. My dad would go so far as to explain to me that love songs on the radio were part of a government ploy to get you to marry and pay taxes.” The lights truly come on for Bruce in 1964, when he flips for “The Beatles…The Beatles…The Beatles…an ‘ain’t no sin to be glad you’re alive’ mantra and simultaneously the worst and most glorious band name in all of rock & roll history.”

Springsteen stakes his claim on that history in the 1970s, when he and his E Street compadres hit the big time. He goes into the whole tale, from his workaholic studio habits to his tax problems: “Some enterprising young man at the IRS must have seen those Time and Newsweek covers and said, ‘Who is this guy?’ The answer was, he was a guy who’d never paid a single penny in income taxes his whole life.” He also describes his decades of therapy and periodic struggles with depression. “I was crushed between [ages] 60 and 62, good for a year and out again from 63 to 64,” Springsteen writes. “The only thing that would lift the burden was 100-plus on two wheels or other distressing things,” aside from “my trustiest form of self-medication, touring.”

He’s hilariously blunt about his cluelessness when it comes to the sex-and-drugs part of the sacred trinity. His dad’s boozing scared him away from drugs, and when it comes to groupies, he might just have liked women too much (still a very underrated element of his legend). In the 1980s, he admits, “I figured now was the time to take advantage of the sexual perks of superstardom.” As he says, “Wilt Chamberlain would not have to start looking over his shoulder any time soon but at the beginning of the USA tour I decided to…see. So….I saw.” When his first marriage ends in divorce, he goes to his folks’ house to break the news. While driving him back to the airport, his dad says, “Bruce, maybe you should move back home for a while.” At first this pisses him off: “I was tempted to mention that I was a nearly 40-year-old self-made multimillionaire and the prospect of moving back into an eight-by-12 room in my parents’ house, still holding my stuffed Mickey Mouse, was…not impossible, but not likely.” Yet the moment still strikes him, all these years later: “The old man finally wanted me around the house.”

Like so many adult children of alcoholics, Springsteen bends over backwards to avoid conflict, so it’s no surprise he doesn’t punch down. He labors to find a kind word for everybody here, even when they’re suing him or kicking his ass in a brawl – Born To Run could be the exact spiritual opposite of the new Mike Love memoir. Even his infamous high school principal – you know the one, the man who banned him from graduation because of his long hair – is now “a basically good guy.” It pains him to go into any detail about the “mild grudges” that broke up the E Street Band for ten years. But unsurprisingly, Clarence Clemons stars in many of the funniest stories: “Clarence once mentioned to me during a negotiation that he should be paid not only for playing but for being Clarence.”

He describes the weird wilderness years after Tunnel of Love, when he fired his band and drifted to Hollywood. At one point in the Nineties, when the rock world figured he’d gone into an unannounced retirement, he finds himself and his wife Patti Scialfa attending Frank Sinatra’s eightieth birthday dinner, singing jazz standards at the piano with the odd trio of Steve Lawrence, Eydie Gormé and Bob Dylan. In one of the funniest and most touching chapters, he takes his then-teenage son Evan to see his favorite band, Against Me! (“Vicious-sounding punk music,” to dad’s ears.) He drives Evan to the show, hangs in a side bar with the other parents, then manages to impress his son when the band’s bassist shows off the Bruce tattoos on his arms – including a whole verse of “Badlands.” For once, Bruce Springsteen gets to feel like the cool dad. As he admits, “My kids didn’t know ‘Badlands’ from matzoh ball soup.”

With Springsteen there are always the twin giant questions of how and why. How does he keep doing what only he can do – and what nobody else has learned to copy? And why does he burn to keep re-conquering his mountaintop, proving it all night at four hours a shot? How, he can’t explain – he doesn’t claim to get it either. (Sure, he lifts weights, but the world is full of middle-aged gym rats and you don’t see them leading 60,000 voices in “Thunder Road” after midnight in your local football stadium.) The why is a trickier question, and that’s the one that dominates this book. Springsteen has lots of questions about what fuels him – emotional neediness, obsessive-compulsive hubris, the fact that he just comes alive onstage. “There, strangely enough, exposed in front of thousands, I’ve always felt perfectly safe, just to let it all go. That’s why at our shows you can’t get rid of me.” That’s what makes Born To Run so fascinating – he can’t get rid of himself either.