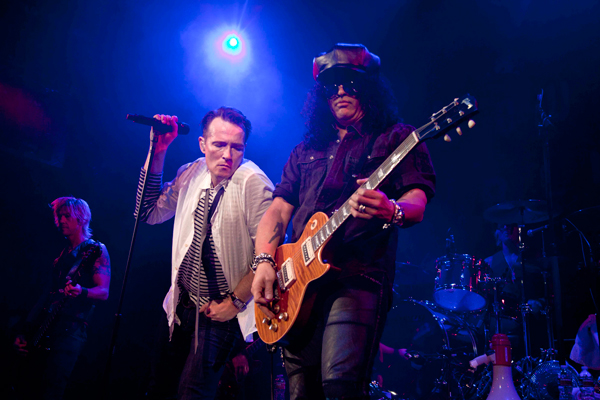 When we spoke last week with Velvet Revolver guitarist Dave Kushner about the reason behind the band’s one-off reunion, he talked movingly about the impact his late best friend, composer John O’Brien, had on so many in music. That was clear last night when the reunited Velvet Revolver headlined “Love You Madly: A Concert for John O’Brien” at a sold-out House of Blues in Los Angeles.

While most of the focus was on VR’s first gig in four years with Scott Weiland, an eclectic and impressive array of talent built up to the headlining set. Among the early highlights were local favorites Fishbone, who gave way to Tom Morello, a.k.a. the Nightwatchman. Backed by his band, Morello brought it in his three songs, from an instrumental version of Rage Against the Machine‘s “Testify” that had all heads bobbing to his cover of Bruce Springsteen‘s “The Ghost of Tom Joad,” which had the crowd playing air guitar. Before the song, Morello spoke of how O’Brien’s spirit was in the room.

During a fan-favorite, three-song set that included “Sunday Morning,” Maroon 5 also remembered O’Brien, crediting him as a big part of their success.

Stephen Stills, joining Sheryl Crow for four songs, used his time on stage to honor another group, dedicating his rendition of Buffalo Springfield‘s “For What It’s Worth” to “the 99 percent.” Stills also rocked on a sterling “Love the One You’re With,” while Crow delivered raucous versions of “If It Makes You Happy” and “Everyday Is a Winding Road.”

But when Weiland, Slash, Duff McKagan, Kushner and Matt Sorum took the stage together at 11:37, it was clear that the vast majority, if not all, were on hand to see the reunited supergroup. Opening with “Sucker Train Blues,” the band sounded in fine form. Weiland thanked the crowd for coming and called the show “sad, but sweet too,” as he recalled a show he and Sorum did for Weiland’s late brother, Michael.

The singer sent out good wishes to O’Brien’s family before the band picked up steam again with “She Builds Quick Machines.” They continued the momentum with “Slither,” then wrapped up on a quieter note with their cover of Pink Floyd‘s “Wish You Were Here.”

As Kushner told us last week, the idea was just to get through the night, which the band did seamlessly. Though a lot of people this morning noticed a message on the band’s website that said “New Velvet Revolver coming,” that message has been there for some time. According to band reps, the group has no comment on any further collaboration at this time.