When crooner Ben Gibbard teamed up with downtempo electronic producer Jimmy Tamborello for “(This Is) The Dream of Evan and Chan,” an initially one-off collaboration back in 2002, the timing couldn’t have been more perfect. Tamberello’s world of IDM (ie. Intelligent Dance Music) was ambient and aloof by name, Gibbard was a mind-bogglingly earnest indie-rocker who would soon develop an army of equally precious fans to sing to. Together as the Postal Service, their bedroom song-writing shared over time and space and, yes, the US postal service, they would become actual indie-pop stars. If last night’s Barclays Center show, part of a tour thrown to celebrate the reissue of Give Up, proved anything, it’s that their fans love them just as much as they ever have.

“Let this be a lesson for all you budding musicians out there,” joked Gibbard early during the night’s nostalgia trip. “Make an album and then don’t do anything for ten years and you’ll end up at Barclays.” He was exaggerating a bit; the band members have had success with their individual outfits (Death Cab For Cutie, Dntel, Rilo Kiley) while watching the legacy of Give Up haunt on through ad spots and movie soundtracks. But last night they were the Postal Service – and if it was weird to be reunited live, touring for the first time since their one-off go of it years ago, they’re certainly not showing it. 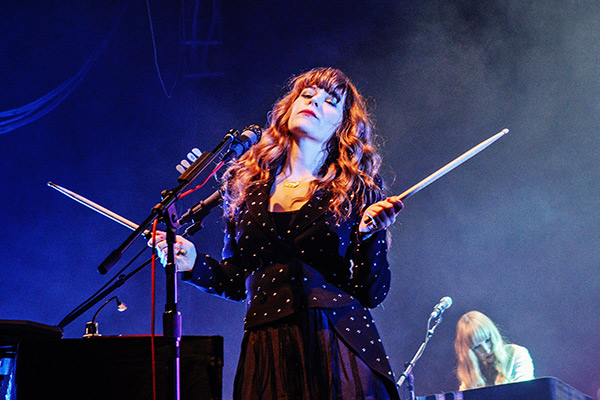 The stage looked too large for Gibbard, a poster-child for his past and just as twee as ever, jogging in place to the band’s new jaunt “Turn Around” with his mic clutched tightly between his hands. He coyly two-stepped in time with Jenny Lewis during the saccharine lovers quarrel “Nothing Better,” displaying the type of heart-baring endearments that have no doubt both flattered and smothered some past object of his affection. Lewis was a rockstar through and through; she coolly manned the keys while funneling her vocals through a sampler and jamming alongside Mynabirds’ Laura Burhenn on percussion. (In more ways than one, Lewis acts as the Nancy Whang to the Postal Service’s LCD Soundsystem. Live she’s unassuming, self-assured, and quietly guides the direction of songs that could easily succumb to over-showiness.) For “Natural Anthem” the singer channeled Dave Mustaine (her self-described spirit animal) and used her teeth to pluck a guitar melody out of the song’s reverbed scuzz. Yes, her teeth.

But it was Tamborello, dwarfed by a platform of computers, controllers, samplers, and a relentless fog machine, that was the true hidden hero of the night. The producer is also the reason that the band’s arena-sized show managed to sound current despite its sentimental undertones – and relevant even to today’s indie-pop landscape, for that matter. Those dated blips and bloops that he once mailed on burned CDs still translate beautifully live and, more importantly, feel ahead of their time. The industrial knocks, snippets of energetic garage and drum-n-bass influences and moaning cinematic synths found on Give Up have since become a go-to combination for producers like M83, for example. And it’s easy to forget that the two tracks from Give Up that sold big to begin with  – “District Sleeps Alone” and “We Will Become Silhouettes” – did so on the Billboard dance charts. Last night, the thousands in attendance couldn’t help but dance again, singing along to the hits word for word to the stage and up into the rafters. 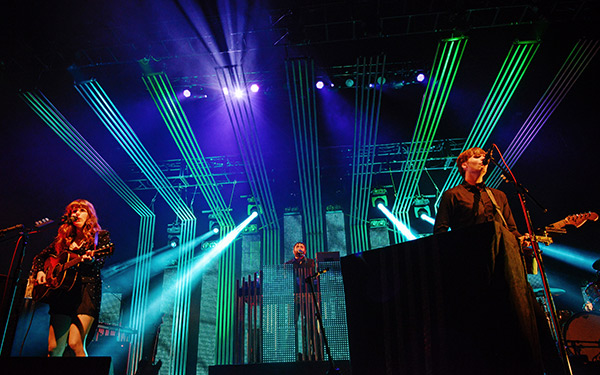 This was the strange part about the show: experiencing it live. The re-issue of Give Up features dance remixes by industrial new-waver Matthew Dear and techno star John Tejada, and the band’s desire for movement and audience participation was apparent on stage. Along with massive light shows came extended, percussive jam-sessions and Gibbard’s bounding about the stage, leading clap-alongs and submitting to personal dance convulsions. But, perhaps because they’re a band that their fans have never seen live before, listening to the Postal Service feels like it should be a personal experience, one delegated to roadtrip sing-a-longs or particularly self-deprecating nights curled up in bed. Instead, at Barclays’ 18,000-seat venue, the show became about purging (feelings! memories!) en masse. Everyone from the VIP to the far-reaching corners of the stadium sang along to “Such Great Heights,” aligning the starry emotions beaming out from their loving, freckled eyes with the distant glare reflected from Gibbard’s guitar.

The band closed out with “Brand New Colony,” a song that wills a world to life where a doting man would do nothing but swaddle his love in all of her favorite, perfect things. It was during the song’s interlude that I remembered an interview with Owl City, a Top 40 act that sounded suspiciously similar to Postal Service for a band who claimed to have never heard of them. The band’s Adam Young later admitted that the Postal Service had been an inspiration to them, adding that he hoped Owl City could maybe take over where Give Up had left off. And last night, as Gibbard and Lewis moaned “Everythingggggg, will chaaaaaaaaange” over and over and over again until they were drowning in the echoes of the thousands of fans singing back to them, I thought about how absolutely laughable the idea of a successor was. No one could ever be the Postal Service except for the Postal Service. 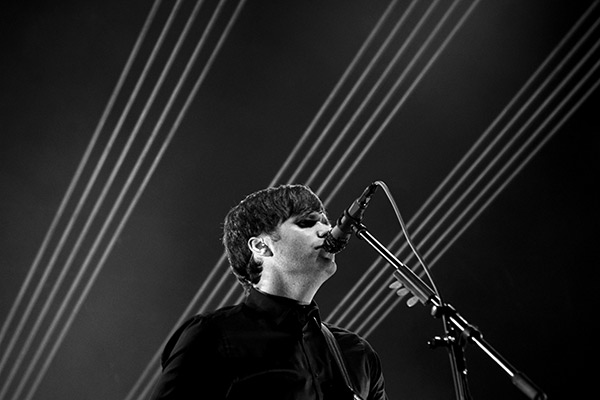