The mourners gathered for the funeral of Ian “Lemmy” Kilmister of Motörhead were greeted at a Hollywood hilltop chapel in a style close to the late rocker’s heart: with a shot of Jack Daniel’s at the door. The full house in his honor was a sad but often celebratory crowd of family and comrades, of devoted road crew and platinum-selling rockers who called him a friend, a “pirate” and a personal hero.

There were guest books to sign and fistfuls of commemorative guitar picks inscribed with an update of Lemmy’s personal credo: “Born to lose, lived to win.”

It was the beginning of a full Saturday of testimonials and, later, swelling Sunset Strip bar tabs for toasts to the late singer-bassist, who died suddenly on December 28th after a diagnosis of terminal cancer. “This is like no wake I’ve ever been in. People are celebrating his life, not mourning his death,” Gene Simmons of Kiss told Rolling Stone outside the chapel at Forest Lawn Memorial cemetery. “He was extremely comfortable in his own skin. And maybe that’s a lesson for all of us.”

The altar was transformed into a shrine, with two of Lemmy’s bass amplifiers (nicknamed “Hammer” and “VROOM”) standing tall on either side. There were photos of his beloved band from different eras, and a large Iron Cross made of black and white flowers with the words “RIP LEMMY.” At the center was an urn with Lemmy’s ashes shaped like his black cavalry hat and crossed-sword insignia.

In the pews were generations of rockers in tears and high spirits from Black Sabbath, Metallica, Foo Fighters, Guns N’ Roses, Judas Priest and Anthrax, among others. At the podium, bassist Mike Inez, from Alice in Chains, described the honoree as an inspiration and a man of singular cool. “There was one Elvis Presley, one Little Richard, one Steve McQueen and one Lemmy,” said Inez. “Motörhead is no longer, and that is one of the heaviest things to wrap my head around.”

Among the musicians closest to Lemmy in recent years was Slash, who stood behind the podium in a black leather jacket and described his late friend as having “more integrity in one finger than a room full of rock & rollers, and straight-up honest, 100 percent loyal.” Judas Priest singer Rob Halford said he was a “man who lived life on his own terms, a rock & roll maverick.” 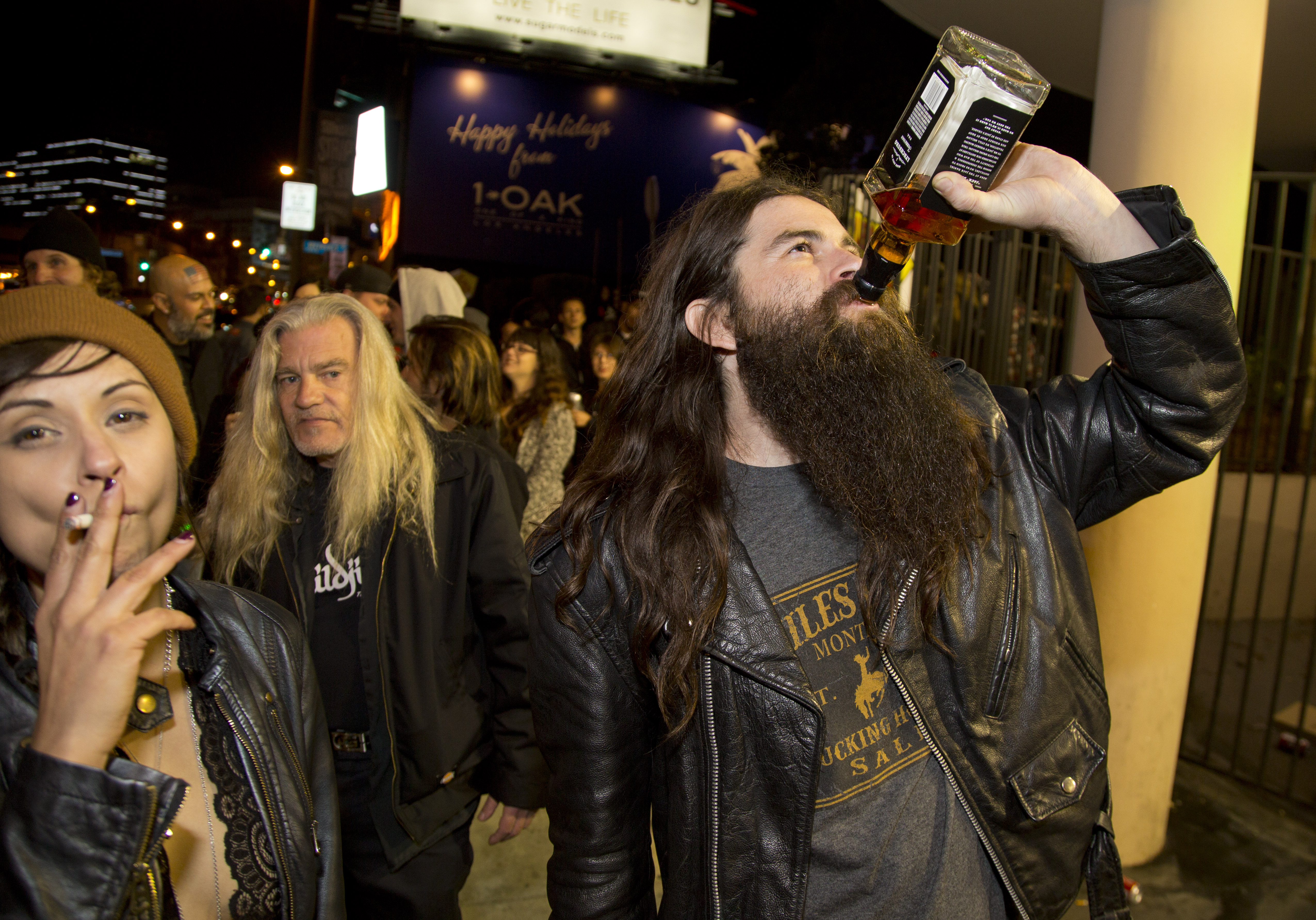 Anthrax guitarist Scott Ian once again labeled him a rock & roll “pirate,” a rare but particular breed of rocker, seemingly indestructible. In his closing speech, Dave Grohl recalled his first meeting Lemmy in the Nineties, after Nirvana was gone and his Foo Fighters were still new, and recalled the very first words the Motörhead icon said: “I’m sorry about your friend,” referring to Kurt Cobain’s death.

The service ended after two hours, and mourners exited the chapel, but one who lingered at the altar was Nik Turner, Lemmy’s old space-rock bandmate from Hawkwind. He wore a tilted black trilby hat and lifted a saxophone to play “When the Saints Go Marching In,” and repeated the joyful melody as he walked toward the door.

As the afternoon grew dark, a small group that included Lemmy’s girlfriend, Cheryl Keuleman, delivered the urn to be entombed, right across from the resting place of Ronnie James Dio. “She didn’t want to leave him alone,” said Mikeal Maglieri, a friend to Lemmy for decades and owner of the Rainbow Bar and Grill. The Motörhead leader’s tomb will eventually have a glass window so visitors can see the urn.

The mood on the Sunset Strip was more like a party. Fans lined up outside the Rainbow, Lemmy’s neighborhood pub where he spent his hours between tours on the video-game console with a cigarette in hand, drinking bourbon-and-Cokes. Inside was the official reception for the memorial, and fans waited to get inside.

“I drove up here to pay my respects to the man,” said Miles Ricketson, 25, who arrived from San Diego with a friend. Standing in line in long beard and black motorcycle jacket, he took another drink from a bottle of Jack and shared it freely. “As far as rock & roll, man — a fatal blow. He showed us what rock & roll is. We have to follow that path.”

Also in line was Manny Figueroa, 46, of East Los Angeles, wearing a Motörhead T-shirt and a denim vest covered in patches for Iron Maiden, Led Zeppelin and AC/DC. He last saw Motörhead over the summer at the Shrine Auditorium in town and noticed how thin Lemmy had become. “I was like, ‘This might be the last time I ever see him,'” Figueroa said, “so I cherished every second of that concert. I still remember it like it was yesterday.”

Inside the Rainbow, guests crowded the patios and restaurant. Keuleman took Lemmy’s place at the corner of the bar, now covered in flowers. Foo Fighters Grohl and Pat Smear ordered drinks and talked with fans. And Turner strolled the rooms, blowing his sax. Later, just outside the rear entrance, Glenn Danzig chatted up Cypress Hill. Grohl joined them just as one guest fell over drunk and was carried away. 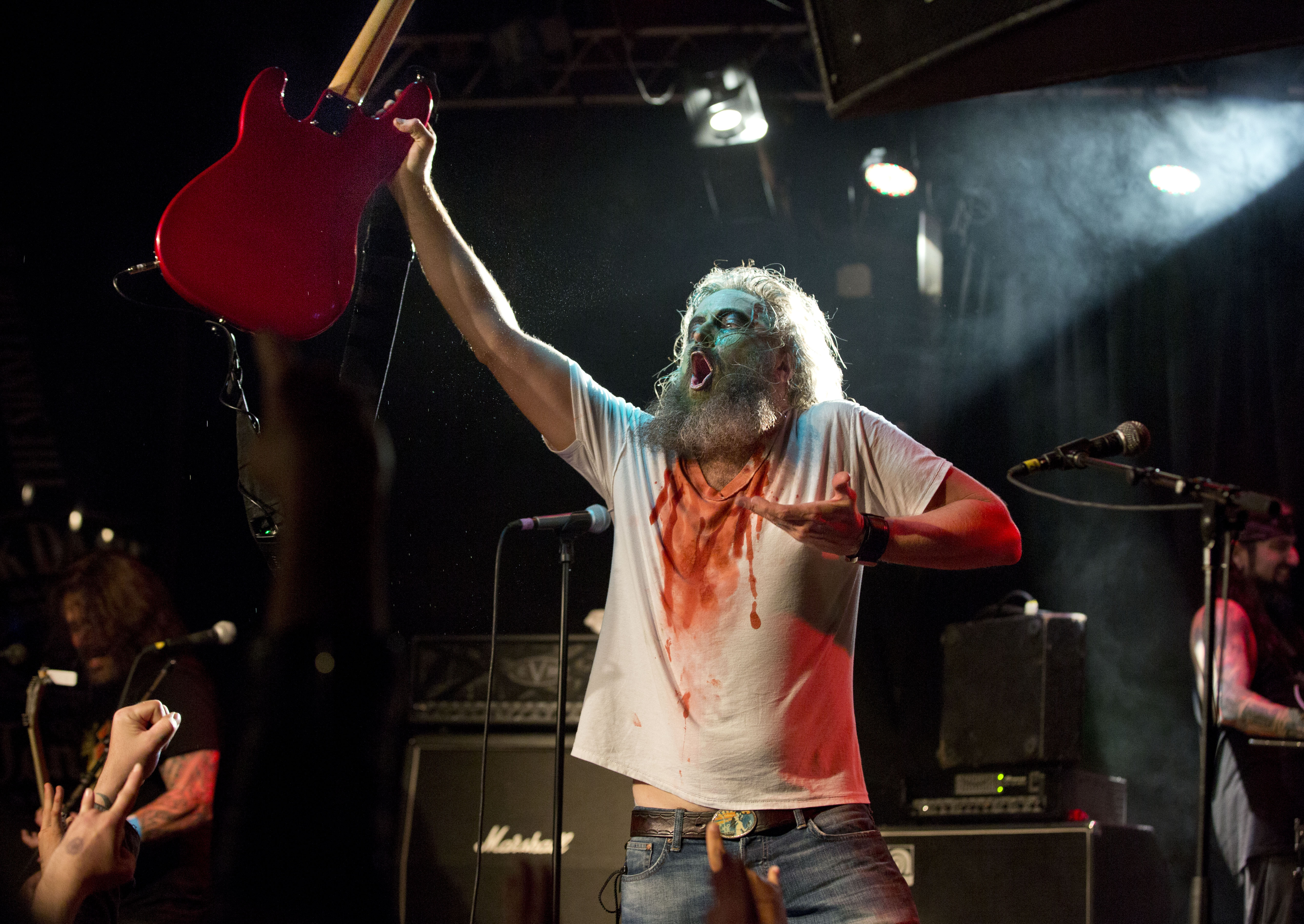 Next door, the Roxy was open as another gathering place, with a row of Jack Daniel’s bottles lined up on the bar and Motörhead music cranked up. But it was the Whisky two blocks away that delivered a live music tribute, as performed by the supergroup known as Metal Allegiance, including vocalist Troy Sanders of Mastodon and Megadeth bassist David Ellefson. Corey Taylor from Slipknot and Stone Sour flew in from Las Vegas to be part of the show.

“We’re all Motörhead fans and we know the songs,” Ellefson told Rolling Stone. The Metal Allegiance tour date was set months ago, but in recent days, the Whisky requested that a Lemmy tribute be included. “What a prestigious honor to be asked by the club to do this tonight. In some ways, we’re the band for Lemmy’s wake.”

After the band’s normal set, the musicians returned for a six-song tribute to Motörhead. “Killed by Death” became a full-audience shout-along in the packed 250-capacity room, with two guitars and two basses roaring. Sanders sang and played bass on “Overkill,” as former Slayer drummer Dave Lombardo pounded an intense thrash beat.

The night’s emotional peak came with the arrival of Motörhead drummer Mikkey Dee, hair long and gray, carrying a cup of beer and asking for 14 seconds of silence. He bowed his head, then raised it to cheers. “You’re all fantastic! OK, let’s continue the motherfucking party!” he shouted. “Enjoy, Lem! Keep it, keep it, keep it going!”

Then he sat behind the drums to play Motörhead classic “The Chase Is Better Than the Catch” one more time.

After the set, Sanders said he was a Motörhead fan since a teenager and once accepted a Marlboro Red from Lemmy and smoked it even though he is a nonsmoker. “Mikkey Dee is here tonight. I know his heart is broken, and I believe he’s masking it with happiness,” Sanders said. “I gave him a big hug, and that meant a lot to me as a man, as a friend and as a fan.”

At 2 a.m., the sidewalks were less crowded, and the Rainbow was emptying out. There were spent bottles of Jack and empty beer cans among the votive candles that still flickered along the sidewalk.

Princess McCain, 24, in a studded leather jacket, got into the party after two hours in line. It was worth the wait, and a chance to remember her one encounter with Lemmy Kilmister, whom she once spotted at the bar playing video poker. “I just stood behind him while he pulled the little lever and I walked away, because I didn’t want to bother him,” she said with a smile. “That is enough for me. I stood behind a legend.”

Among the photos and signed notes to Lemmy on the sidewalk was a backstage pass for that night’s Patti Smith concert across town at the Wiltern Theatre. Smith had mentioned the late rocker onstage tonight, as part of her “Elegie,” and one of the crew dropped a pass there for Lemmy.

Looking over the flowers was Lenny Kaye, Smith’s longtime guitarist and collaborator, and a committed fan of the kind of straight-ahead, primal sounds that Lemmy craved. “He connected with that thing that makes rock & roll so special — that empowers us, that illuminated us, that makes us become all that we ever hoped we could be,” Kaye said.

He met the Motörhead bassist only once, back in the 1970s, but saw the band whenever he could. “He was a true rocker,” he said. “He had a great time. I believe in what Spinal Tap says: ‘Have a great time, all the time.'”