The guitarist sent his first note to manager John Podesta in October 2015, though the two had previously met, as DeLonge introduced himself as, “The one who interviewed you for that special documentary not to [sic] long ago.” DeLonge goes on to discuss a multimedia project – ostensibly his vast To the Stars effort – before requesting another meeting with Podesta.

“I would like to bring two very ‘important’ people out to meet you in DC,” DeLonge wrote. “I think you will find them very interesting, as they were principal leadership relating to our sensitive topic. Both were in charge of most fragile divisions, as it relates to Classified Science and DOD topics. Other words, these are A-Level officials. Worth our time, and as well the investment to bring all the way out to you.”

DeLonge contacted Podesta again this January, sending an email with the subject, “General McCasland,” apparently a reference to a former Air Force official with (according to DeLonge) information relating to the infamous Roswell crash. In the email, DeLonge insisted that McCasland was not a skeptic — despite the General’s own previous insistence — and added, “When Roswell crashed, they shipped it to the laboratory at Wright Patterson Air Force Base. General McCasland was in charge of that exact laboratory up to a couple years ago. He not only knows what I’m trying to achieve, he helped assemble my advisory team. He’s a very important man.”

While the Wikileaks dump included no messages from Podesta to DeLonge, a calendar notification dated the day before the “General McCasland” email suggests that someone named Susan McCasland Wilkerson accepted a meeting invitation from Podesta and the guitarist.

While DeLonge has long-documented his alien obsession, from Blink 182’s “Alien’s Exist” to his To the Stars project, Podesta has also openly discussed extraterrestrials and encouraged politicians to reveal what they know. In February 2015, after stepping down as a senior advisor to President Barack Obama, Podesta wrote on Twitter: “Finally, my biggest failure of 2014: Once again not securing the #disclosure of the UFO files. #thetruthisstilloutthere.” And in April, Podesta claimed that, if elected, Hillary Clinton would declassify as many documents pertaining to UFOs as possible.

In a statement sent to The Wall Street Journal, the Clinton campaign condemned the alleged involvement of Russia in the hack and Wikileaks dump, though they did not specifically mention DeLonge’s exchanges with Podesta. 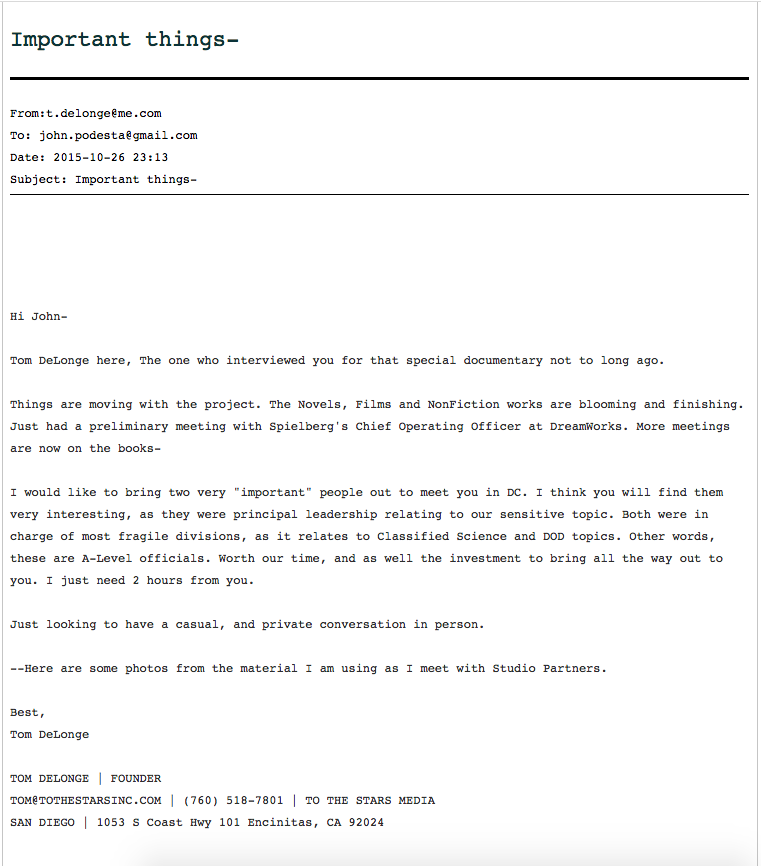