Ray LaMontagne is perfectly content being an outsider from the world of popular music, living in a 19th-century farmhouse in the Berkshires, driving old cars and spending his days laboring away on his ethereal music. So LaMontagne had no hesitation about releasing the noncommercial Ouroboros, a winding collection with echoes of Pink Floyd, consisting of two 20-minute tracks as a way of recreating the vinyl experience. “They had a hard time getting it at first,” he says of his label. “All I can do really is just hope that the real music heads out there will get it. This is a record made for them.”

The album was produced by LaMontagne’s friend Jim James. The band (sans James) — bassist Tom Blankenship, drummer Patrick Hallahan, guitarist Carl Broemel and keyboardist Bo Koster — will join LaMontagne on the road this summer beginning June 10th. “I’m really proud of it,” says James. “One of our favorite records is Talk Talk’s Spirit of Eden, that kind of feeling where you can just get into the record, and it’s more of a piece. There’s still songs, but it’s all interconnected.” Here, LaMontagne reflects on the process and why he “doesn’t give a flying fuck” what people think.

You’ve said of this record that there was one night when the album “made itself clear” to you.
That’s how I approach writing. I can’t sit down with the intention of writing a song. I’ll only pick up my guitar if something is knocking on the door. Once the melodies have sort of been bothering me for a time, then I pick up my guitar and try to find them. But only if they want to be found.

You usually take a few years between albums. Ouroboros arrives just two years after Supernova. Did these songs come faster than you expected?
I had just gotten off the road from the Supernova tour, and Jim and I actually talked earlier that year about getting together and doing something. We had set some time aside, and I knew that date was approaching. I just thought, “I’ll make myself available to receive.” It’s hard to explain. I make myself available. I go into my workspace and I just sit. I make myself quiet. If the songs start to appear, I follow them and see what happens. That’s really what I did. I got home and took a couple weeks to just decompress and made myself available.

I spent three or four weeks in a very calm state of mind so that I could hear these things. One night I just couldn’t sleep. I had a horrible night’s sleep — very vivid dreams, very restless. I woke up with a splitting headache. In my dream, everything seemed to make sense. I saw myself doing it: “This goes here, this goes here — it’s like two songs.” I immediately e-mailed Jim and sort of let him know what I was thinking about, and he seemed up for it. I made a demo of what I considered at the time to be two songs, two 22-minute songs or something. And sent them to him. And we were off. He was into it.

Tell me about the decision to record an album of just two 22-minute songs.
Well, that’s just the way it seemed it wanted to be. That’s what it wanted to be. And it just felt very fluid, one, you know. It’s just that’s how it made itself apparent. I’m not sure how else to describe it. You just have to trust it. And I trust that creative force. I think that’s kind of the deal. It’s like a long-term relationship: You have to really have faith in it. I always think of albums as the format. I think it’s perfect. I don’t think you can tamper with that. It’s not just sound, the analog which is so much richer. It’s the format. You’re constrained by just 45 minutes, and it’s perfect to me. I don’t want to listen to any more than, and I live and breathe music. But 45 minutes is perfect, and I also love to break; I love the 20 or 25 minutes in and you flip it. 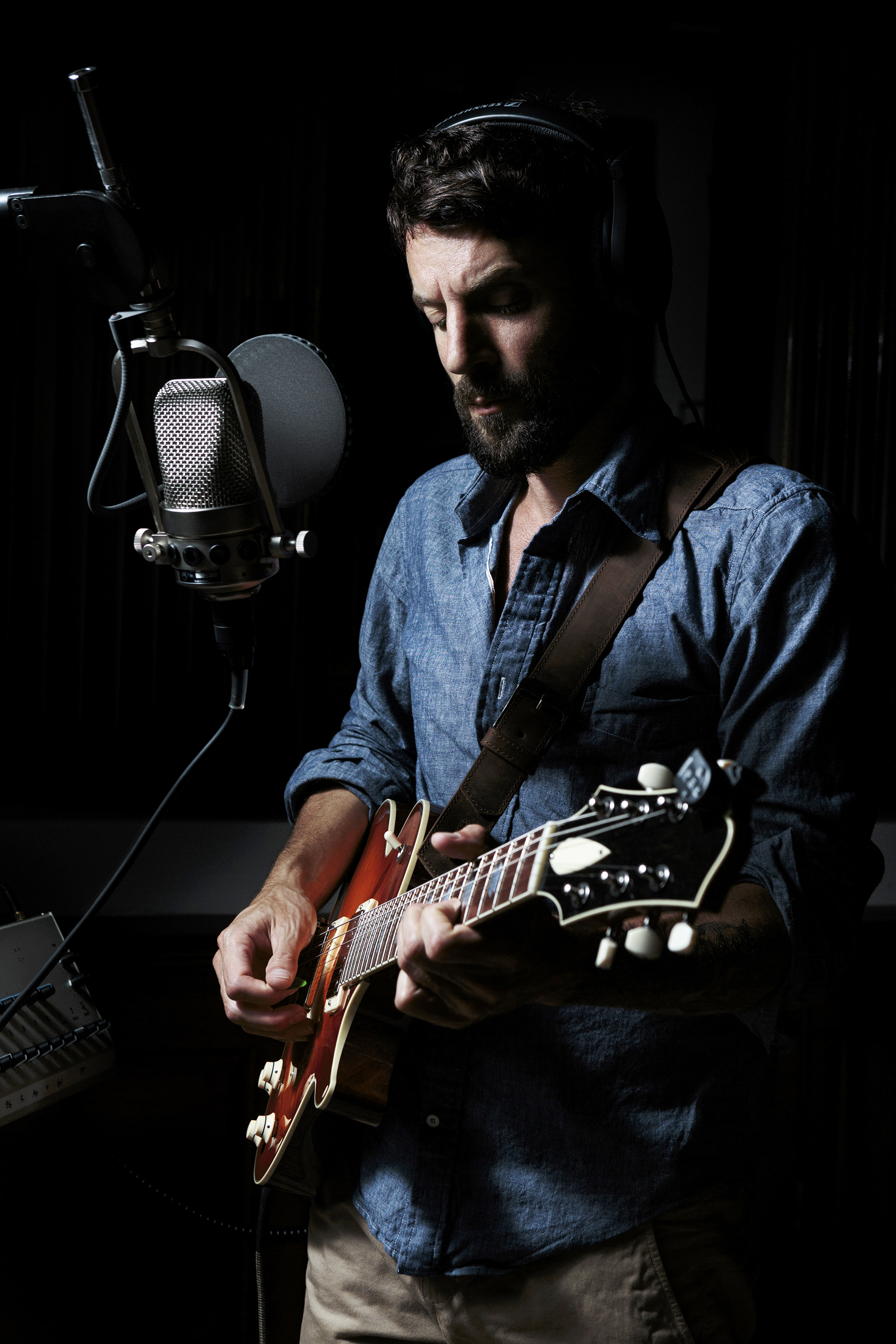 What did you get out of working with Jim James?
Well, he’s been a friend for a long time. We’ve known each other now for over 10 years. I was happy to get in the same room. I think what I always appreciated about Jim is he’s just very good at communicating. We didn’t waste any time on disagreements. If I’d say, “I’m hearing this thing, and I don’t know how to get this sound,” he would help me. There was no time wasted. We would very quickly make decisions.

I think this material was perfect. It was just perfect for us to do together. Because I had sent him a demo with two parts, all guitars. It was acoustic and electric guitars, all the sonic stuff. I really wanted to bring it into three dimensions, into technicolor, you know. So Jim brought in the band, really wonderful, sensitive players. But it became pretty clear once we started playing that it was all right there. Everything was right there in the room. This is a record that easily could have been built sort of brick by brick, piece by piece, but rather than that, we just played it as a band, and I think that’s what really makes it stand out for me. Playing it as a band in the same room, it feels very open, very patient. But at the same time, there’s a weight to it. It’s almost weightless and dense and really heavy at the same time. It’s really magical. Something really magical happened.

How does that compare to working with Dan Auerbach?
I can’t really compare the two; I don’t really want to. They’re very two different personalities. They couldn’t be more different. But the Supernova record was a great time. We got it done quickly and intensely, which is good. There was slightly more a charged atmosphere, I would say. I’m very proud of that record. I feel like the Supernova record, those songs are very me. It’s a more honest representation of me than any record I have made prior to that.

The first single, “Hey, No Pressure,” is some of your heaviest music ever. Have you been picking up the electric guitar more?
I have been. But the single, what bugs me, I’m afraid it’s going to put people in a frame of mind. Someone hears that and they think, “Oh, this is what the record is going to be — I hate this,” or whatever. I don’t give a fuck. People will think what they’re going to think. I’ve never cared what people’s perceptions of me are, and I really don’t give a flying fuck.

You’re on a major label, but you seem to like to keep a low profile. Do you keep up with the popular music world, like, say, watching the Grammys?
No, no. I’m not interested. It’s not my world. I really have a lot of respect for music, the art form of music. It’s my whole life. I don’t care about any of that other stuff. And I have always felt that way. I’ll build a career on my own merits, my own hard work and nothing else. The record, as I say, as a whole, is so different from that one snippet that’s out there. It’s not represented, really. The record really has a beautiful arc to it and a beautiful flow, and the texture is like a story. It’s very circular.

All I can do really is just hope that the real music heads out there will get it. This is a record made for them. It’s not made for casual listeners. That’s the challenging part of it. It’s really made for people who still love to put on a record and hear it through and really go in. We were listening to it in the studio — when we were finished we brought in a bunch of friends and put it on. Nobody said a word for 40 minutes. At the end of it, we turned the lights back on and everyone just came out of this daze. It really works. I think this is going to be one of those albums that’s going to find its way slowly into the right people’s hands.

In June, you’re heading out on the road with My Morning Jacket playing behind you.
I’m so stoked about it. This is something we’ve tried to do in the past and just couldn’t get the schedules to line up. I think more than that, things just happen when they’re supposed to happen. So many things surrounding this record, for me, just fell into place. This album has been sitting around since last February. It’s been sitting for a year. And it just kept getting pushed and moved and shuffled. And I think RCA had a hard time understanding it at first. I think a lot of people had a hard time getting it at first. But RCA are great. I think it shows that they still have a place on their label for an artist like me, as much as sometimes my choices frustrate them.

Have you started mapping out what the shows will be like?
I think what we’re going to do is I may go out and open the show by myself and play an acoustic set, just by myself. And then we’re going to play the new record, start to finish. And then we’ll probably come back out and play some other stuff after that. These guys are great musicians, and I think we’re just looking forward to digging into stuff and seeing where we can take things.

Are you following the election?
I don’t know what the hell it is. I just think it’s ridiculous. All of it is ridiculous. It’s so sad. It’s sad that people just fall for this shit again and again and again. None of these guys ring true to me, none of them. It’s all bullshit. It’s just sad. I have to separate myself from it all.