The bodyguard for Memphis rapper Finese2Tymes was charged with 10 counts of aggravated assault in relation to a July 1st shooting at a Little Rock, Arkansas nightclub during the rapper’s concert.

Kentrell Gwynn, who was arrested along with Ricky “Finese2Tymes” Hampton in Birmingham, Alabama the day after the shooting, was formally charged Friday. Twenty-eight people were injured in the incident, including 25 people who suffered gunshot wounds.

Gwynn is currently in prison on federal weapons charges stemming from the Little Rock shooting as well as an unrelated Forrest City, Arkansas shooting that took place June 25th.

Hampton was also indicted on federal weapons charges from that Forrest City shooting; a search of the rapper’s vehicle yielded two handguns and an AK-47. 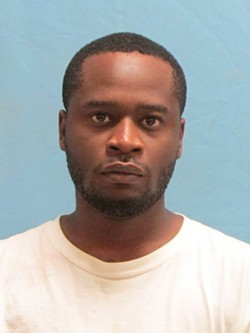 In that previous shooting, Hampton is accused of getting into an altercation in the parking lot of Forrest City’s Club Envy. While attempting to leave the lot, his car was blocked by another person. After growing impatient, Hampton allegedly pointed his AK-47 at the person and, as they drove off, the rapper fired a shot that shattered the rear window and struck the driver in the neck, Arkansas Matters reports.

Hampton had previously been sentenced to eight years in prison for felony aggravated assault in his native Tennessee. As a convicted felon, Hampton is banned from possessing firearms.

Gwynn is also charged with providing the weapons to Hampton, as video from a Memphis gun store shows Gwynn purchasing the firearms later found in Hampton’s possession.