Radiohead have finally detailed their upcoming reissue focusing on the sessions that birthed the band’s dual masterpieces, 2000’s Kid A and 2001’s Amnesiac.

Kid A Mnesia — which celebrates the 20th/21st anniversary of the two albums — arrives November 5th via XL Recording. Like the stocked OK Computer 20th anniversary reissue OKNOTOK, Kid A Mnesia includes the original two LPs — Kid A, Rolling Stone’s Number One album of the 2000s, and Amnesiac — as well as a third disc, dubbed Kid Amnesiae, that features outtakes, alternate versions and unreleased music from the albums’ fruitful studio sessions.

Radiohead shared one of Kid Amnesiae’s more tantalizing selection Tuesday, the never-before-heard outtake “If You Say the Word,” previously known amongst fans as the fabled “C Minor Song” that guitarist Ed O’Brien wrote about in his Kid A-era online production journals:

Kid Amnesiae will also contain an unreleased studio version of “Follow Me Around,” a longtime fan favorite that has only been performed live, occasionally as a segue into the Kid A opener “Everything In Its Right Place.”

The track actually predates the Kid A sessions, as it was unleashed during a soundcheck documented in the 1998 film Meeting People Is Easy. Like “True Love Waits,” which Radiohead toiled with for decades before releasing a proper studio version on A Moon Shaped Pool, Thom Yorke has kept “Follow Me Around” as a rare surprise in his arsenal, performing it once with his side project Atoms for Peace as well as a 2017 acoustic gig with bandmate Jonny Greenwood.

Kid Amnesiae also boasts an retooled version of “Fog” (a B-side that band was never completely happy with), a third, “In the Dark” take on “Morning Bell” (the link between the two albums, as Kid A and Amnesiac both feature different versions of the song), “Like Spinning Plates (‘Why Us?’ Version), a trio of mysterious “Untitled” songs, an alternate version of the B-side “Fast Track” and more. 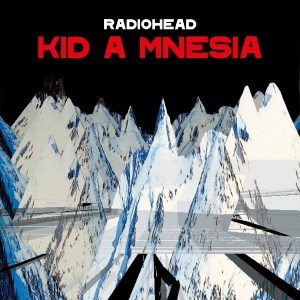 Kid A Mnesia is available to preorder now in a variety of formats, including the limited deluxe 3xLP edition — Kid A, Amnesiac, Kid Amnesiae — pressed on cream vinyl and containing a 36-page hardback art book, plus Kid Amnesiette, a limited edition, 2-cassette version of the reissue that also contains five B-sides from the era. Indie record stores will also offer an exclusive limited edition red vinyl version of the deluxe edition.

In addition to the album reissues, Yorke and the band’s longtime artistic collaborator Stanley Donwood will release a pair of art books focusing on the artwork from the era, the 300-page KID A MNESIA Art Book and Fear Stalks the Land, a black-and-white paperback that gathers Yorke and Donwood’s notes, lyrics and sketches. Both books arrives November 4th via Canongate.