Invariably, there comes a point during an R. Kelly concert when the self-proclaimed King of R&B steps front and center – as he did on Thursday evening during the first of two gigs in Chicago on his Single Ladies tour – and lets the audience know what’s on his mind. He doesn’t say it so much as sings it.

“I’m horny from singing all these eye-candy songs,” crooned the Pied Piper, dressed head to toe in white-on-white, including jeans, a leather jacket with the word “SINGLE” on one sleeve and a finely-pressed T-shirt, to the hooting, hollering hometown crowd. After admitting he makes love to his own music – he’s tried it with others’, it just doesn’t work – he offered up some “real talk.” R. Kels, it seems, was recently rejected by his main squeeze. “Kels wants you to have his baby,” he told her, but she wasn’t into that. “What the fuck is wrong with you?” he replied, completely serious.

It’s confounding yet hilariously exhilarating moments like these that make an R. Kelly show unlike any you’re bound to attend in the near future. And it’s largely because the singer is a showman to the utmost: he’s eager to shock, confuse and impress in equal parts. At times his show resembles audible pornography; there’s only so many times you can hear about him getting all up in that. But those checking their discretion at the door are in for an unforgettable evening. 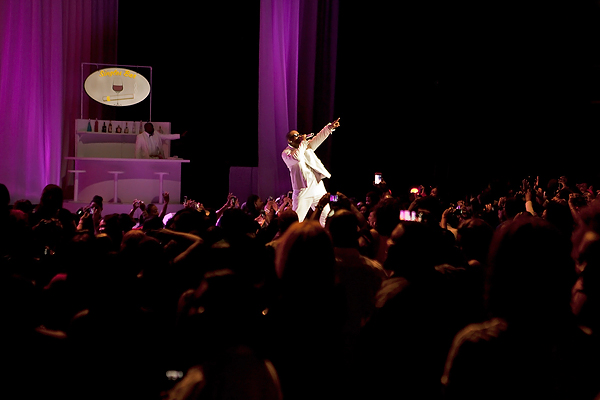 Kelly’s show, it must be noted, is a meticulous, well-rehearsed and highly synchronized affair. The elaborate stage set is visually stunning; on Thursday it included two cocktail bars (stocked with actual bartenders and female patrons) and a shimmering white platform with a massive staircase on which the singer’s crack eight-piece band stood all evening. And Kelly’s rapport with his band is readily apparent. All parties were on cue throughout.

Frankly, though, there’s just so much to digest. At one point, Kelly rated women for their mock-stripping ability as he watched from an actual throne. Later, the singer emerged from the audience and writhed in ecstasy on the ground. Then, to top it off, he placed a female audience member in a cage, handcuffed her (after she signed a waiver, of course), and had the crowd watch as he pretended to leave her, umm, hot and bothered.

He did, of course, also sing his walking hard-on of a heart off, and it was a mighty display of talent. This wasn’t shocking: the 45-year-old has a divine voice. It also helped that he comes armed with a massive collection of songs on which to put his impressive tool to work.

Admittedly, it’s quite easy to forget the ridiculous breadth of Kelly’s discography. In just shy of two hours the suave singer busted out what seemed like every notable cut in his extraordinary repertoire (ironically, his latest single, and the tour’s namesake, “Feelin’ Single,” never did make an appearance). His pop gems (“I’m A Flirt,” “Ignition (Remix),” “Fiesta,” “Hotel”) cuddled up against his let’s-get-nekkid-and-make-babies classics (“Bump N’ Grind,” “Your Body’s Calling”). Few tracks would actually be sung in full – only the inspirational set closer “I Believe I Can Fly“ and the encore “When A Woman Loves” received this honor. But it hardly mattered. All shenanigans aside, listening to Kelly sing anything is an experience impossible not to relish.