So, How Was Your Decade is a series in which the decade’s most innovative musicians answer our questionnaire about the music, culture and memorable moments that shaped their decade. We’ll be rolling these pieces out throughout December.

Few artists can truly stake a claim to the James Brown Honorary “Hardest Working Person in Show Business” Title, but Questlove is certainly a contender. At the top of his docket, of course, remains the Roots, with whom he released four studio albums in the 2010s, plus three collaborative LPs with John Legend, Betty Wright, and Elvis Costello. And of course, the Roots did all that while serving as the house band on Late Night before making the jump with Jimmy Fallon to the big time when the comedian took over The Tonight Show in 2014.

But that was just the tip of the Questlove iceberg. In 2013, he published two books – a memoir, Mo’ Meta Blues, and a book on Soul Train – and would write three more (including a cookbook) by the time the decade was done. He started a podcast, Questlove Supreme. He appeared in movies and TV shows (Popstar, Law & Order, Empire), he produced movies and TV shows (Top Five, Finding the Funk, Roots) and he composed music for movies and TV shows (Vincent-N-Roxxy, Inside Amy Schumer, Sesame Street). He DJed around the world, even spinning records at Barack Obama’s White House farewell party, and later curating the musical soundtrack to accompany Michele Obama’s memoir, Becoming. That’s a lot for anyone, but for Questlove, it still feels like the half of it.

So, How Was Your Decade, Mark Hoppus?

So, How Was Your Decade, Lin-Manuel Miranda?

The 10 songs that really moved me in the 2010s were: Rihanna’s “James Joint,” Bon Iver’s “Perth,” Earl Sweatshirt’s “Burgundy,” Pusha T’s “Lunch Money,”
Kali Uchis’ “In My Dreams,” Solange’s “Things I Imagined,” Thundercat’s “Them Changes,” Radiohead’s “Give Up the Ghost,” Raphael Saadiq’s “Movin Down The Line,” Hiatus Kaiyote’s “Nakamarra.”

The artist who had the best decade was: Donald Glover. I enjoyed watching him make every snarky critic eat their smug shit.

The craziest thing that happened to me in the 2010s was: You mean besides get the awesomest job ever, produce Fela!, teach at NYU, pen five New York Times bestsellers, win a Peabody, develop cool clean foods, direct my dream movie, DJ about 17 weddings (16 successfully), accidentally join the Hamilton crew, nerd out on my favs with the coolest podcast ever, rack up five Grammys, score films and TV, work for my favorite tv show ever (Soul Train), write music for Sesame Street, survive a disastrous DJ gig for Obama’s last night in the White House and find a woman that is my match??!?!?!?!? #Winning

My least favorite trend in music this decade was: All the obituaries I had to write about its participants.

The TV show I couldn’t stop streaming in the 2010s was: I loved NO show more than I loved Community. The smartest. Timeless underrated comedy by far.

The best new slang term of the decade was: This can be really corny to answer. Probably the most telling is “LOL.” Nine times out of 10 we aren’t laughing when we do “LOL” and LOL shows you how much we DON’T communicate as a society because 99 percent of the time it’s typed. But I guarantee you it’s the most COMMONLY used slang across the demographics. It’s as common as “the” or “and.”

The most surprising encounter I had with a fellow artist this decade was: One night I got a random non-sequitur 10:30 call from Prince (“where Jimmy Fallon at?”) wanting to challenge Jimmy to a game of ping pong at Susan Sarandon’s Spin (as a novice New Yorker this was a mind-blowing 15 sec request to unwarp: “Why wasn’t I invited?” “Wait…Susan has a place for ping pong?”…..Prince plays ping pong!!!?!?!) this first witness account was the gift that keeps on giving. I got a text from Jimmy 2 nights later at 9pm “It’s going down! hurry!!!” I was in Brooklyn and immediately hightailed it to Manhattan. By the time I got on the block I saw a whirl of chaos whooosh into an SUV. Sensing I missed the fun, I rushed to the door to see one of Jimmy’s writers standing outside smoking a cigarette. “Hey what i miss?! Did it happen??!?!”…….She pointed “You just missed him, he’s pulling off”…..I turned to my right to see his SUV creeping to the corner to a red light. “YO!!” I yelled and jogged to the passenger side out of breath. “What happened?……what happened?!?!?”…..Grey Poupon style the window rolled down slowly…..Prince in the back seat with a (custom) gold paddle (??!!!) dressed immaculately deadpans slowly “Ask yo boy”……*window rolls up*……..car wisks off in the night.

This is now my life.

The misstep I learned the most from in the 2010s was: Cancel culture and all of its consequences is real. Unfortunately, perception is real too. So ….. yeah that.

The best book I read this decade was: The Gene Keys by Richard Rudd turned my entire life around….

….but damn if David Ritz’s Respect (his fiery unauthorized Biography of Aretha Franklin) was revelation of the decade.

Something cool I did this decade that nobody noticed was: Got Jay-Z on Twitter.

This is Hov… Ahmir! Half! Haa.

The strangest thing someone said about me in the media this decade was: I did one of those year-end survey things (similar to this) and the interviewer was asking me what i thought “song of the summer was”—-answering from a statistical perspective instead of my personal preferences — I stated something factual “welp….’Fancy’ is pretty much inescapable right now so i guess it will be 2014’s song of the year” — you don’t know true panic until you see your name trending on social media. black twitter NEVER let me live that one down. i now know you must be SUPER explicit and transparent when you give quotes because y’know….2010s!

The best outfit I wore this decade was: Welp I pretty much trolled the world in practically every outfit choice.

In the age of overpriced Yeezys I had someone customize my white ones to look like Ikeezys. Rocked em on red carpet too. But i’ll say no designer expressed my political anger and rage better than FWMJ’s art and T-shirts. 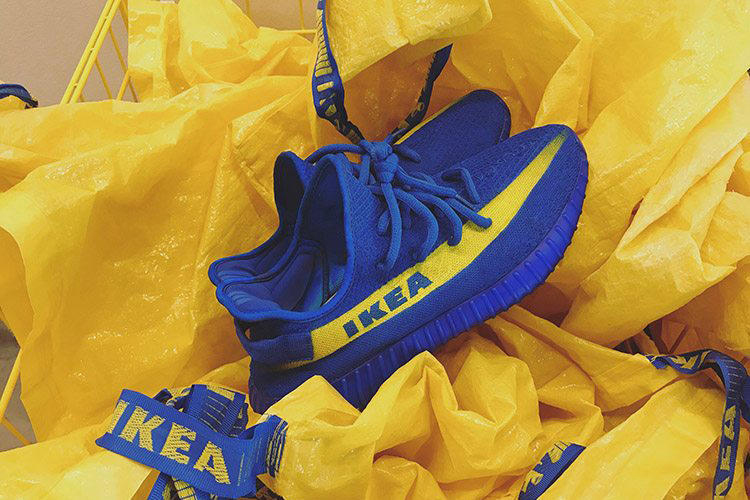 The most “2010s” moment of the 2010s was: Watching crowds get excited watching The Roots singing a Roots song (“You Got Me”) that Drake covered in his song (“6 Man”) and the crowd being impressed that we know a Drake song……that’s based on The Roots…..song……that they didn’t quite put 2&2 together on…..so yeah…..that lol