“I’m very proud of how much the music has held up over the years,” enthuses Scotty Moore from his home in Nashville. And he has the right to be. It’s been nearly forty-six years since the sixty-seven-year-old guitarist, along with friend and bassist Bill Black, helped catapult a shy teenage singer named Elvis Presley to superstar status by joining in on an impromptu send-up of Arthur “Big Boy” Crudup’s “That’s All Right, Mama” at Memphis producer Sam Phillips’ Sun Studios. The resulting record not only became a smash but also helped launch the rock & roll revolution — and assured Moore’s induction into the Rock & Roll Hall of Fame this year in the newly created “Sideman” category.

Moore’s trademark guitar playing — a unique amalgam of spontaneous, echoey jabs, tasteful licks and delicate finger picking — would influence a host of fledgling rockers spanning two generations — from Keith Richards, Jeff Beck and George Harrison to Brian Setzer, Chris Isaak and Jonny Lang. Completely recovered from a heart attack he suffered a year ago, Moore is looking forward to touring in the spring and recording a follow-up CD to 1997’s all-star effort All The King’s Men, which reunited Moore and Presley’s original drummer D.J. Fontana (Black died from a brain tumor in 1965) after nearly thirty years.

How does it feel to be inducted into the Rock & Roll Hall of Fame?

I have kind of mixed emotions about it. I’m very glad of the new [sideman] category they’ve opened up. I think now there will be lots of deserving players who get a chance to get in there. On the other hand, I never considered myself a sideman. I was part of a group. We were either Elvis Presley, Scotty and Bill, or — when D.J. Fontana joined us — we were the Blue Moon Boys, and I think we should have all gone in together as a group. But like I said, I’m glad they’ve opened up this new category, and I’m glad to be one of the persons going in. And hopefully it will help a lot of other folks. It just shows what politics can do [Laughs]. 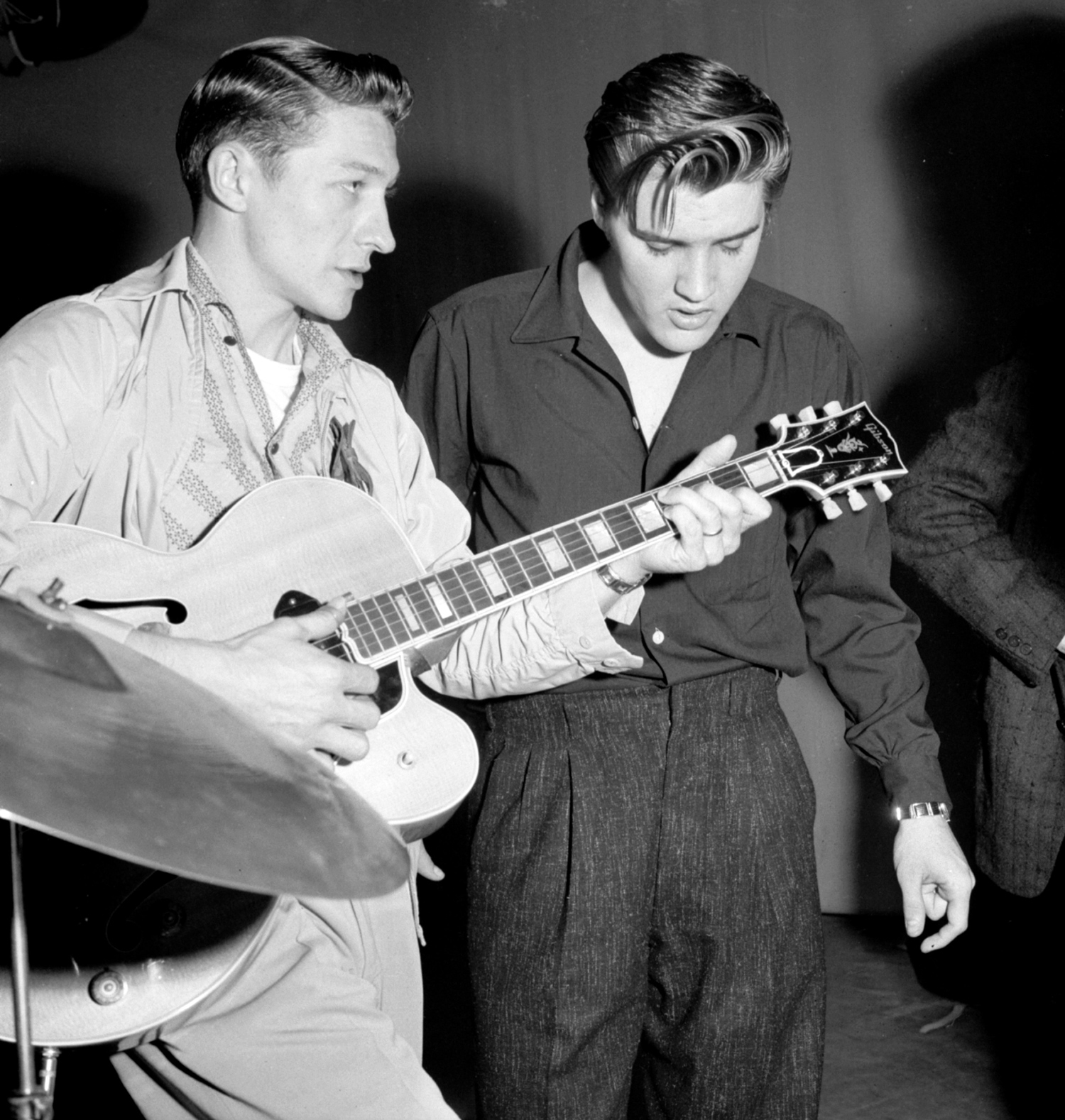 How did you first hook up with Elvis Presley?

I came out of the Navy in 1952 and put together a band in Memphis called the Starlight Wranglers. I heard that Sam Phillips had a little studio and record label and I went to see him about getting a record out. I knew that if we could make a record, we’d get more places to play around town. Sam agreed to record us and he and I became good friends. Then one day we were having coffee, and his secretary actually brought up Elvis’ name. He had dropped by the studio with the hope of recording something. So Sam said, “Call this guy up and get him to go over to your house and see what you think of him.” So he came to my house on the Fourth of July. It was kind of a pre-audition.

What was your impression of him?

It seemed like he knew every song in the world. I’d name a song and he’d sing it. Whether it was pop, country or whatever. I noticed that he also had excellent rhythm and timing on the guitar. His voice was a little bit on the high side. It hadn’t matured yet into the baritone he had later on. But even in his voice he had great rhythm. He’d hear a song and wouldn’t have to work on how many beats he’d have to wait to come in. It was all very natural for him.

Did you guys do any wacky things on the road in those early days?

Oh yeah. I’ve always given Bill Black the credit for Elvis’ antics. Back in those days, bass players, especially those with a country music background, were always comedians. Bill would start carrying on and riding his bass and things like that, which would loosen the crowd up. And then Elvis would have them in the palm of his hand. He’d start shakin’ his leg and stuff. Bill would just whisper something in Elvis’ ear while he was singing, and whatever Bill told him to do, Elvis would do it. Every time. He’d say, “Elvis, throw your belt out now,” and he’d take it off and throw it out into the audience. And then Bill would whisper something else and Elvis would come over and take my belt off. Then one night, Bill took one of Elvis’ shoes off and threw it out into the crowd and it hit an old lady in the head. [Laughs] We had to cut that one.

What have you been up to during the past five years?

I’ve been playing quite a bit. I did an album with D.J. Fontana called All The King’s Men. Some of the Rolling Stones were on the album with us. Keith [Richards] did a song and Ron [Wood] did one, too, along with Jeff Beck. There’s a funny story there, too. When we were in Ireland doing the cut with Ron at his house, Mick [Jagger] called. He talked to Ron and then I got on the line and he said, “I had a feeling something was going on over there. I didn’t even know you guys were in the country. How come you didn’t ask me?” And I said, “Well, we thought we kind of pushed too heavy already by having Keith and Ron,” and Charlie was going to do a drum thing with D.J. but he had the flu. Then Mick said, “Well if you do another one, I wanna be on it.” And every time we see him, he always asks about it. We also made a few trips over to Europe and did some touring over there. We hooked up with the Stones in Hamburg in ’98. They were playing at a racetrack and 95,000 people were there. Even the Stones were awed by the crowd. Keith said, “God! At our age! Look at that crowd! What the hell are they here to see?”

Not too long after Elvis’ ’68 Comeback Special, you stopped playing guitar for nearly twenty-five years. What did you do during that time?

I already had a recording studio here in Nashville before the Comeback Special. And after the special, D.J. and I had dinner with Elvis at his house. He asked us if we’d like to do a European tour. We told him, “Sure. Just give us a little warning. We’d love to do it,” because I had never been to Europe and neither had D.J. Anyway, it never happened. The next thing we knew, Tom Disken, Colonel Tom Parker’s right-hand man, called all the musicians into Nashville and said that Elvis was going into Vegas and he’d like us all to come out and work with him. At that time, Nashville was at its peak in terms of being a center for recording sessions. On a daily basis, musicians were making more than what they’d make in a week out there in Vegas. So it came down to the bottom line. None of us went. I just stayed with my studio and hung up the playing side of it.

One of my beefs about country music — if you can call it country music anymore — is that, damn, when you listen to ten records in a row you start saying, “Boy, there’s something familiar about all of these.” And then you find out that the same musicians are on all of them. Some of them don’t even take their guitars home. They just leave ’em set up in the studio.

What are your future plans?

We’re working on putting together another European tour. We’re also talking about doing another album because there were about six other artists we had to pass over on the last one because of scheduling issues: Chris Isaak, Bonnie Raitt and John Fogerty. We’re gonna approach Eric Clapton, too. Oh, and Mick Jagger. Can’t forget him.