Q&A: Bun B on the 'Incredible Journey' of Creating His Hip-Hop Coloring Book - Rolling Stone
×
×

“It’s taken awhile for this thing to come together,” rapper Bernard Freeman, a.k.a. Bun B, tells Rolling Stone via phone from a Houston-area Waffle House. “But it was well worth it. I wanted families to enjoy this rap coloring book, just like they should be able to enjoy hip-hop together.” The former UGK member was referring to Bun B‘s Rap Coloring and Activity Book, which he created with fellow Houstonian, illustrator and music journalist Shea Serrano.

The genesis of the book was an interview with Bun that Serrano conducted for the Houston Press two years ago. A day later, Bun called Serrano back to discuss a book idea. At first, they considered a hip-hop survival guide but they decided against it, and the project lay dormant. A year later, Shea was coloring with his kids and got extremely bored. He decided to take pen and paper and make them a coloring book filled with pictures of underground Houston rappers. Inspired, Serrano launched a Tumblr page with additional drawings of artists like 2Pac and Drake. The Tumblr quickly went viral. He and Bun then reunited and fleshed out the concept.

The coloring book will be released on September 17th and features 42 hip-hop visages, including Drake, Wiz Khalifa, Big Boi and Queen Latifah. Scroll through some exclusive pieces and link to the full-sized images below, so you can print them out and get coloring. The work contains puzzles, connect-the-dots, cut-out activities, color-by-numbers, quizzes based on songs and fill-in drawings. There also are mini-biographies of the rappers and suggestions of which songs of theirs to listen to while coloring. E-40 even helped pick the terms for his own word-search puzzle.

“We wanted to do something that has mass appeal,” says Bun, “and I think we did a good job of that. It’s been an incredible journey.” Besides talking about how hot it is in Houston right now, he also got to discussing his musical legacy, late UGK partner Pimp C and the dumb things we say and do when we’re 18 years old.

So, I heard this book is for adults. Is it okay for kids to read and use it?
We wanted to make it as accessible as possible. We can’t say we are gearing this toward kids, but a discerning parent should be totally comfortable coloring these pages with their children. I wouldn’t recommend a kid go out and get it for themselves, but a lot of parents would love to share some of this hip-hop with their children. We didn’t put people with middle fingers up or 40 bottles, that kind of thing.

Did you draw any of the rappers yourself?
I wouldn’t subject these people to my drawings. I probably wouldn’t have made people in hip-hop happy if I drew their faces. It would be a lot of, “Yo, this is what I look like, man? This is what you think I look like?”

I know there are 42 hip-hop artists in there. Was it hard narrowing the list down? Did you have any disagreements about which rappers should be in it?
No, not really. This is just the first book, and there are so many rappers. The hardest part was just trying to track some people down. Rappers are very hard to peg down sometimes. Getting clearance from 40+ rappers was no small thing. You never know where the guys are. 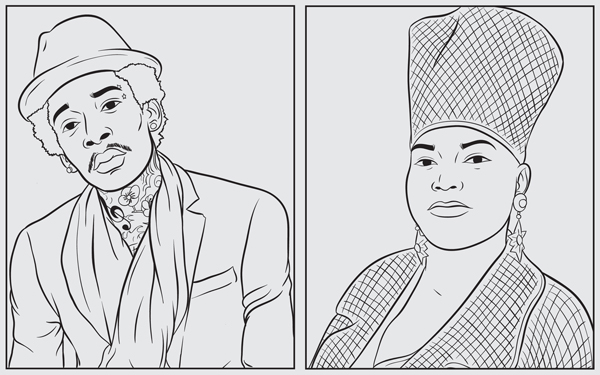 Were you refused permission to use anyone‘s likenesses?
Uh… yeah. I’m not going to put anybody on blast, but yeah. For their own reasons, you know? Certain people decided to not be associated with it, and I can respect that. It’s not a normal thing. I don’t hold any grudges about it. It’s not that serious. It’s a coloring book; you either get it or you don’t.

Are any of the Tumblr drawings going to make it in?
I don’t think so. We were trying to keep all those pages separate from what we ended up publishing. We wanted the book to be as new as possible. We didn’t want it to be like a regurgitation of the Tumblr. There may be a few in there, but I still haven’t seen the finished book.

Do you have plans for a follow-up coloring book, or are you waiting to see how this one sells?
I would love to do this again. There are so many elements of hip-hop that we can use. As long as people are open to it, I would love to see us do more books. As long as our publisher is happy, we’d like to keep doing it.

Did you already spend your advance for the book? If so, what did you buy?
Oh, I’m sorry. I didn’t know there were advances. I need to call my publisher back. (laughs) 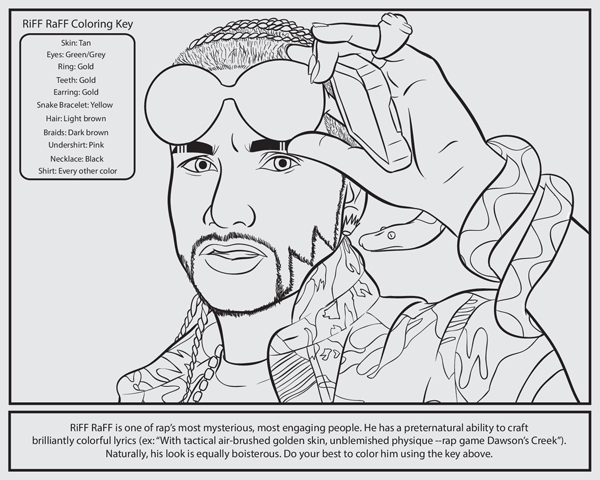 Your UGK partner Pimp C passed away in 2007. What would he think of the coloring book, and do you think he would’ve helped to curate it if he were around?
He would have thought it was a cool little thing to do. He had young children himself, so I think this is something he would have loved. And this is about money, so if there is a new way to make money, he would have definitely been down with it. There ain’t nothing weak about doing something positive with your kids. That’s what I want this book to be: something not only you can color and have fun with, but also creating opportunities to share moments with your children built around hip-hop.

And why is that?
I don’t think people realize how deep he was and how serious he was about what he did. You know, he was a funny, creative guy, and he was able to get a lot across in a rhyme without having to use a lot of words. He was the king of inflection. His tone said everything for him. I just think he was a brilliant songwriter.

Are you still teaching classes at Rice University in Houston?
Yeah, I start again in the fall and teach the course, and it’s one of my jobs now. I teach it every other fall.

Is your Hip-Hop and Religion class an easy A?
Of course not. Not even close. My course is much deeper. If you take it just because you think you can ace it since you know a couple of rap songs from the radio, you’re going to be sadly mistaken and end up getting a failing grade.

I read rumors that you are coming out with your fourth solo album, Trill 4 Life, this year. If true, what can we expect on it?
That’s not true. That’s not the title at all. That’s just something people were throwing around on Twitter. I’m coming out with an album, but that’s not what I’m working on right now. It’s far too early a stage to have a title. I’m putting together a compilation called Back II Business. It’s a collaboration with II Trill West and Double Dose Entertainment.

It‘s been over 20 years since UGK‘s debut. How has your musical style progressed over the years?
I understand things a lot better now. And I’m just trying to help people as they are following me. Since my early days, I understand the world better. 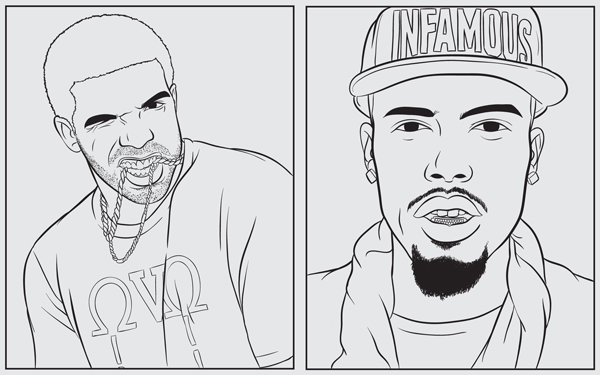 Do you ever look back on the UGK era and think, “I can‘t believe I rapped some of the things I rapped“ now that you have kids and step-children? Like “Pregnant Pussy,” for instance.
It has nothing to do with being a family man; that’s just something I shouldn’t have said, period, you know? I regretted it long before I got married and had a family. I had to learn that just because I could say anything on record doesn’t mean I should. I started realizing how much of what we said was taken to heart by the people that listened to our music. I felt like if they’re listening to us, we need to give them some real sound advice. Not that we weren’t doing that, but we were saying some crazy, outlandish shit, too. “Pregnant Pussy” is only imaginary, but when you are young, you don’t know any better.

Well, you were very young when you made that song.
I was 18 years old when I made that record, and it was probably one of the worst things I did when I was that age. I’ve said some crazy things, but, hopefully, I’ve outweighed that with positive, inspirational things. I would hate for anybody to be judged the rest of their life for what they did at 18, you know?

Are you afraid you are going to burn out with all these disparate interests like your new food website You Gotta Eat This!, your music, teaching and the coloring book?
No, not at all. What you’re supposed to do in life is to continually chase adventure. Otherwise, you just end up on your couch like Al Bundy. I don’t ever want life to not be exciting. I want to learn new things, try new things, and, if at all possible, create new things. That’s how you get burnt out: doing the same thing over and over again. You just got to know your limits. That’s all. 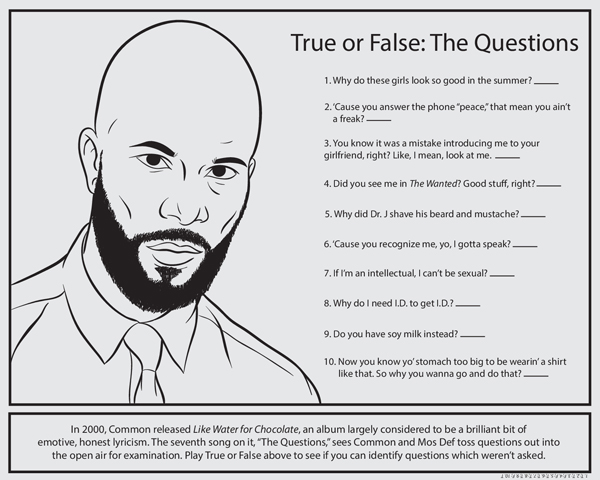