I’ve been stuck in predictably cliché L.A. traffic for what seems like a Kardashian marathon’s amount of time when I realize my Uber driver has been playing the new Post Malone album on loop. Whether you’re body to body at the club or bumper to bumper on the 405, it seems you can’t go anywhere these days without hearing from the chart-topping singer.

But starting this fall, you’ll be seeing a lot more of Post Malone too. Last month, the 90s eyewear giant, Arnette, tapped Malone as their new curator and spokesperson, calling him “the perfect ambassador” to relaunch the brand. Malone’s role includes collaborating on a collection of tricked-out glasses that will be sold through SunglassHut.com, and appearing in the company’s ad campaigns.

The new eyewear launch follows two collaborations with Crocs (yes, those crocs) that sold out in minutes last year, and a curious partnership with Bud Light this past August on a limited-edition merch collection drawing equal inspiration from the singer’s tattoos and lyrics, and from America’s favorite easy drinking beer. 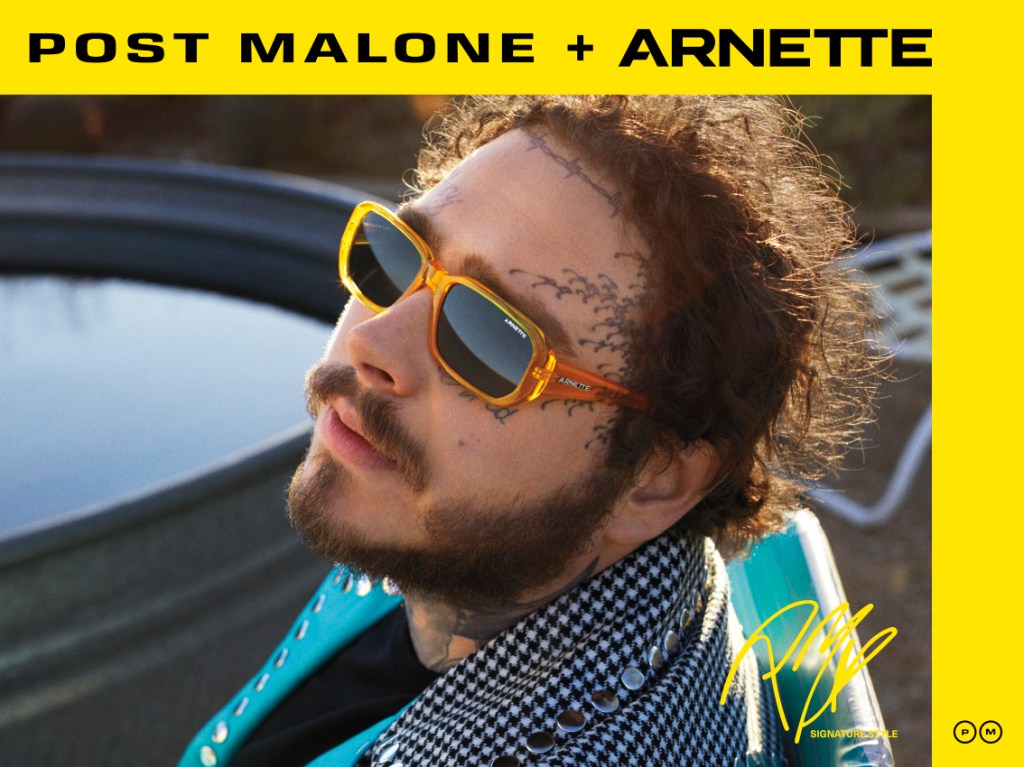 In announcing their new partnership with Malone, Arnette’s press release pushed words like “legend” and “idol,” and said it’s his “authentic style, that makes Posty the perfect ambassador for the world’s freshest trendmakers.”

Luigi La Mendola, Arnette’s Senior Global Brand Manager, says the company was eager to work with Malone, to help them shift their aesthetic “into a more trend-driven brand.”

But while a celeb endorsement never hurts, Post Malone’s sartorial sway seems debatable. What kind of “trend” is he really driving? And who exactly is his audience? Has the wispy-haired singer, whose skipped-a-shower style and face tattoos seem perpetually ripe for SNL impersonation, suddenly gone from being a pop star to a fashion star as well?

The answer is an emphatic “Yes,” at least according to my Hot Topic-topped driver, João, who moved to Los Angeles from Brazil a year ago, and says he’s been a fan of Malone’s “for forever” — or at least “since White Iverson exploded.”

“Post Malone looks like a rock star,” João says, as he cues up the singer’s latest low-fi acoustic strummer, “Circles.” “Just like his music, his style is not one way or another,” he offers. “It’s not too pop, not too hip-hop; low-key but not gangster.”

Then, he adds this: “When it comes to style,” Joao says, “Post Malone is like the new Axl Rose.”

While Malone gives off an IDGAF vibe, he actually does, it seems, give a fuck about what he wears. For the past couple of years, Malone has been working with Los Angeles-based stylist Cathy Hahn, who’s helped him develop a distinctive aesthetic that mixes hip-hop and rockabilly with a generous dose of sleaze.

According to Hahn, the way she began working with Malone is actually the most Post Malone story ever. Hahn was part of the wardrobe department on the Walk the Line spoof, Walk Hard, when Malone reached out, asking if she could style him for a couple promo pics for his sophomore LP.

“I always say [Walk Hard’s] main character, this fake rock star, Dewey Cox, brought us together,” the stylist told Dazed Magazine in a profile earlier this year. The two took to each other immediately.

Hahn, who didn’t respond to an interview request for this story, was the woman responsible for the Dolly Parton suit Malone performed in at Bonnaroo, and the rhinestone-encrusted blush pink set he wore to this year’s Grammys. In the music video for “Celebrate,” Malone’s song with DJ Khaled and Travis Scott, Hahn put the singer in a $3,000 faux-fur women’s coat by Stella McCartney. At the 2018 VMAs, Malone wore a custom, spray-painted smiley face suit as he traded verses and guitar licks with Aerosmith. Suddenly, Steven Tyler’s sequined top and bedazzled leather jacket just seemed… meh.

smiley suit airbrushed by me & made in collaboration with @cathyhahn for @postmalone to wear at the @mtv #vmas while closing out with @aerosmith & @21savage 🙂💘🙃 unreal!!

It isn’t all gimmicky.

Malone, whose fondness for baggy sweatpants and oversized shirts made him look like he was always stumbling out of an overly aggressive frat party, is now rocking fitted turtlenecks and paisley suits with the confidence of an Englishman prancing out of a pub at 3 a.m. — and ready for another nightcap. And while the singer is still seen in oversized tees and sweats, he’s upgraded his basics to brands like Carhartt and Heron Preston. His current go-to pair of shoes, meantime: black Saint Laurent boots (retail price: $895).

Part of Malone’s appeal when it comes to fashion, though, is his ability to mix designer brands with custom pieces (and reportedly, Amazon belt buckles). Hahn, an L.A. native, has tapped independent artists like Angeleno airbrushing artist, Isa Beniston, and chain-stitch and embroidery master Bill Farrelly, to design original pieces for Malone’s red carpet appearances and shows. Together, they’ve created outfits that one fashion editor I spoke to said reminded him of, “DIY bar mitzvah shirts and carnival getups.” “It’s like a caricature, but also kind of cool,” the editor said. “Ironic high fashion.”

Perhaps the true testament of Malone’s sartorial prowess lies not in what he’s shilling, but who he’s shilling to.

“Post’s personal style is kind of like anyone’s when they were between 21 and 24,” says Michelle Runch, an Los Angeles-based marketing executive who has worked on projects with everyone from Jay-Z to the Los Angeles Rams. “He is experimenting and ever-evolving, and people find that relatable.”

Runch, who counts herself as a fan, says it’s also Malone’s authenticity that makes him so engaging for both brands and fans alike. “I think brands want to work with him for the obvious: he’s a number one-selling artist and an All-American guy that clearly appeals to a broad fan base – myself included,” Runch says. “He is truly himself no matter the situation, and someone that brands like Crocs and Bud Light can authentically work with to create products their consumers will love.” (Just a few weeks ago, Bud Light extended their partnership with Malone, unveiling a limited-edition Post Malone-branded can, that features the singer’s mug and autograph front and center).

Like his music, Malone’s personal aesthetic is getting increasingly harder to categorize, but that might not be a bad thing. His awkward mix of sing-song rap and truck stop pop is at once sunny and grungy, like a pair of white Converse you keep scuffing up. It may not be everyone’s cup of tea, but there’s no denying the appeal of a classic pair of Chucks. In the same way, Malone is becoming someone whose style is as much his own, as it is accessible for everyone to make their own as well.

“Post is a product of his environment,” offers Alex James, the owner of the L.A.-based lifestyle brand, PLEASURES. “He mixes styles from every genre and puts it together in a digestible way. It doesn’t matter if brands like him or not – he’s an artist and will do whatever the fuck he wants. I can respect that.”

While you haven’t seen Malone making the rounds at fashion week just yet, it may not be long before he’s front row with Wintour and co. Last July, Vogue called him “menswear’s most underrated star” and there are now entire Reddit threads and Instagram accounts documenting his daily outfits.

For Joao, my Uber driver, it’s less about what Malone is wearing though, but how he’s wearing it. “I love that he expresses himself the way he wants to, and doesn’t look like he’s trying too hard,” Joao says, turning up the volume in our car. “He shows that you can be whoever you want and do whatever you want and that,” he starts to shout, “makes me happy!”

The rest of our ride is unquestionably turnt and uncomfortably nerve wracking as Joao starts singing and swerving to “Circles,” hands waving in the air, farther and farther away from the steering wheel.