He was drumming like Buddy Rich when he was a baby. In his teens, he’d formed a Beasties-meets-Backstreet boy band called the Style Boyz (you remember their hit dance, the “Donkey Roll,” right?). By the time he was in his twenties, he was a solo pop juggernaut who sold out stadiums. His name is Conner4Real, even if the bad-boy singer played by Andy Samberg in Popstar: Never Stop Never Stopping, isn’t real at all. But with his fawning entourage, featherweight R&B-meets-EDM hits and such feats of public idiocy as passing out on a hoverboard, you might mistake him for a genuine Top 40 star – in particular, a certain Canadian chart-topper.

“Oh, we love Bieber!” Samberg says, as his Lonely Island partners, Popstar directors Akiva Schaffer and Jorma Taccone, nod in agreement. “For the record, Conner isn’t based solely on him, or anybody specifically.” They reserved their affectionate mockery, they say, for the modern “popumentary”: those high-gloss, fan-friendly tour documentaries like Katy Perry: Part of Me and One Direction: This Is Us. “We watched a lot of those,” Samberg says. “We just sort of grabbed different elements from everywhere, and then amped them up to an absurd level.”

“I mean, it wasn’t like there was an outbreak of R&B musicians putting their dicks in boxes,” he adds, referencing his famous SNL duet with Justin Timberlake. “It was a good excuse for a joke. But there’s nothing we find funnier than taking something goofy and making it seem as much like the real thing as possible.”

Still, there’s definitely a resemblance between the “Sorry” singer and Samberg’s narcissistic goof. You can also see a bit of Macklemore in Conner’s earnest gay-rights ode, “Equal Rights” (where he keeps reminding you that he’s straight by yelling “titties!” and “Lynyrd Skynyrd!” between verses), and a pinch of Kanye West in his elaborate public proposal to his girlfriend, which ends with Seal getting mauled by wolves. “There’s a scene in the Katy Perry movie where she does this cool, kitschy magic trick during her show,” Samberg says. “We thought it’d be funny to have Conner do that – because it’d probably go horribly wrong.” (Spoiler: It does.)

“I mean, it wasn’t like there was an outbreak of R&B musicians putting their dicks in boxes. But there’s nothing we find funnier than taking something goofy and making it seem as much like the real thing as possible.”
-Andy Samberg

The three of them also watched a number of hip-hop documentaries — they all cite the notorious Li’l Wayne portrait The Carter as a favorite — to look for inspiration, partially because of the influence it has in the modern pop landscape and partially because, according to Taccone, “we tend to skew towards rap music because you just get to tell more jokes per line. Five times more per line, I think.” He pauses. “I just made that statistic up.”

“Didn’t Lin-Manuel Miranda say something like that about Hamilton, though?” asks Schaffer. “I seem to remember reading somewhere that it has more lyrics than any other Broadway play in history by, like, tenfold. You get to jam pack stuff in with rap.”

So really, you’re saying Popstar is the Hamilton of musical mockumentaries?

“I mean, you said that,” Taccone says, fake-humbly shrugging, “we didn’t. But if you want to say that …”

“… And this will definitely be equally as successful!” declares Samberg, making a goofy face.

“Your quote is already on our poster,” Schaffer claims. 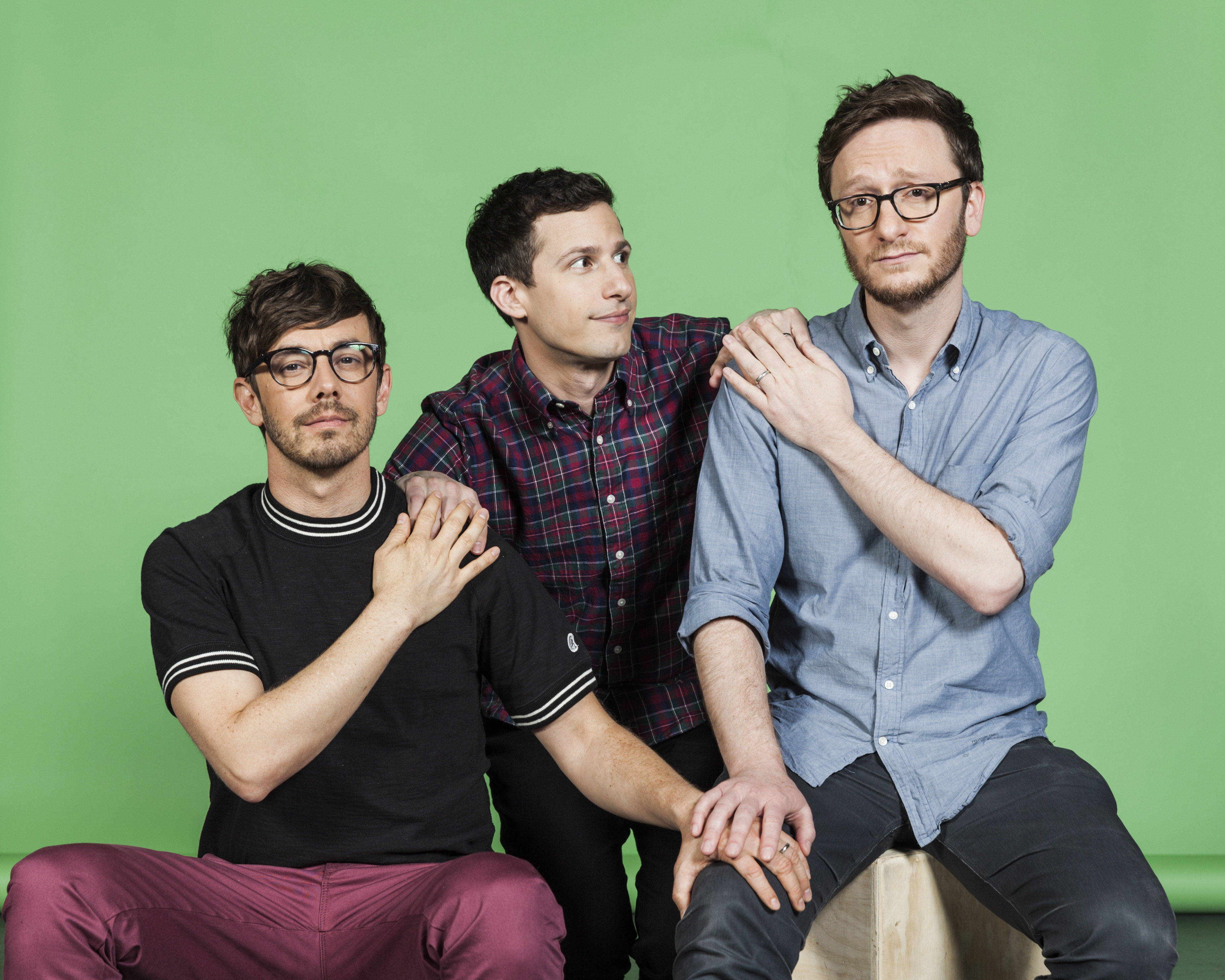 As the joke-rap trio  the Lonely Island, Sam berg, Schaffer and Taccone have plenty of experience  making authentic (and hilarious) pop music,  having released three albums and brought Digital Shorts like “Dick in a Box” and “Jizz in My Pants” to Saturday Night Live. When it came time to cook up Conner4Real tunes for Popstar, Schaffer and Taccone recruited top-shelf producers like RZA, Needlz, Arthur McArthur and Greg Kurstin, who helped make Adele’s “Hello.” “We”d say, ‘We need a hip-hop song or a slow-jam,’ then these incredible beats would show up in our Dropbox,” says Schaffer. “Occasionally, we’d get this horrible-sounding beat from someone and think, ‘I bet you Conner would like this.’ That ended up being what we used.” He pauses. “I’m not telling you what ones those were.”

They even managed to get Max Martin and Justin Timberlake, who guests on Conner’s faux-philosophical song “Incredible Thoughts.” [Sample lyrics: “A milk dud sitting in the acid rain/a housecat addicted to cocaine.”] “Max actually recorded Justin’s lyrics [for us],” says Taccone. “That’s just because they were recording together. That was the only time we could get them: by infiltrating their session.”

That still left the problem of staging Conner’s elaborate stadium shows, complete with a legion of dancers, pyrotechnics and a DJ with a gigantic Deadmaus-style headpiece. (“That helmet was legitimately heavy,” says Taccone, who played Conner’s man on the decks. “Try directing a crowd scene with one of those on sometime.”) Thankfully, the Lonely Island have friends and fans in high places. “Because we were working with Sony, we were able to use actual crowd footage from the One Direction movie,” Schaffer says. “You can catch a few genuine O2 Arena reaction shots in there. And we were also able to get a few minutes onstage before a Maroon 5 concert and film Andy walking around in slow-mo before this huge crowd.”

“It was literally us going, ‘Could you 20,000 people out there help us out real quick?'” Samberg says in a whiny voice. Even better, Adam Levine let them use a hologram of him literally humping himself during one performance scene. “The man is a saint,” Samberg says. “He says he’s already seen the film three times! My wife [Joanna Newsom] is a musician. I told her, ‘We just wanted to make something that bands watch on tour buses.'”

“All we wanted was the Levine blessing,” Taccone jokes as the other crack up. “We have achieved our goal.”