'Please Be With Me: A Song For My Father, Duane Allman': Exclusive Excerpt From New Book - Rolling Stone
×

In her new, just-released book, Please Be With Me: A Song for My Father, Duane Allman, Galadrielle Allman offers a moving and poetic portrait of her late father, the legendary Allman Brothers Band guitarist. In this exclusive excerpt, the author shares her memories of the day her father died in a motorcycle accident at age 24, and her attempt to piece together what happened. She begins with a letter received from Linda Oakley, whose husband, bassist Berry Oakley, died in another motorcycle accident only one year after Allman.

They had just returned from Buffalo, N.Y. and the craziness of “getting clean” . . . getting together . . . and, at last turning over a new leaf. We’d been through a baptism of fire, reborn and renewed. The path before us was clear. We were headed for higher ground.

It was so so good to be back home . . . “all in our places with sunshiny faces.” . . . We had gotten a big orange pumpkin to celebrate the season. Berry and I took the Beebop out to the garden. In the warm afternoon we spread ourselves next to the fishpond and set to work scooping out the squishy pulp. Brittany clutched her Crayola pens, ready to draw a face for Daddy to carve.

We heard a car and a motorcycle pull into the back driveway. Visitors! Peering over the hedges, I saw a huge bouquet of flowers held aloft by brother Duane. He graciously presented  them with a big hug and a “Happy Birthday!” He and Dixie had just returned from a stopover in The Big Apple to see John  Hammond. I was so touched and thrilled  that they’d taken the time to come over and wish me well.

“Ah, a Jack-o-lantern I see! Can I cut out the eye, nose, and mouth?” That was typical Duane. We later  wandered into the house  as he rhapsodized about  the great time they had with John Hammond. “. . . up all night  with our acoustics, just riffin’. Such a righteous cat, man!” He was glowing.

Berry wanted me to show off my new patchwork knee high boots. He’d had them custom made for me at “Granny Takes a Trip” in New York  and they’d just arrived via the post.

“You look so good in them boots it’s enough to make my old pecker hard!” Again typical Duane: bold as brass! I took it as a great compliment. So did BO of course. “I hear you’re takin’ your old lady out  jukin’ tonight!” We were supposed to go to dinner while Aunt Candy entertained the Beebop.

Duane and Dixie headed home to recover from their travels and Candy left to run some errands. We started getting ready for our big date; just waiting for Candy to get back. That’s when the phone rang.

They were all headed to Duane’s place; him on his bike, Dixie behind him in the car, Candy following in Mehitable. The bike spun out and slid after  glancing off the back of a truck. Dixie screeched to a halt and ran over to where he lay. Yes, Candy was right there. I can only imagine how surreal it was for them. She told us he’d been taken to the ER . . . they were there  waiting to hear. . . . Berry and I just looked at each other. . . . He was just here. . . . How could this happen? NOT DUANE!

Promising to call as soon as he knew anything, Berry raced to join the gathering of brothers and sisters  keeping vigil at Middle Georgia Hospital.

I went through the motions of fixing dinner for Brittany, music playing, I think it was Cowboy, as I sent out my prayers. Time slows down when you are waiting, waiting and wondering, worrying and wishing and hoping. At last I heard the back doors opening and closing. I ran to the stairs. As I stood on the landing, Berry was dragging up the stairs. The look on his face just pierced my heart. Candy came in right behind him and said, “He’s gone!”

Heartbreak. Broken. Devastation. Disbelief. We were the walking wounded, sometimes not even able to walk. Joanie and I talked about this yesterday. That night, she and Callahan and Berry and countless others filled Grant’s Lounge to celebrate Duane  . . . many toasts of tequila. I think they were expecting him to show up and tell them it was all a bad dream. When the bar shut down, Joan and Michael managed to walk to their apartment. Berry had driven his Z car. He almost made it safely home but he missed the turn into the driveway and hit the wall instead. The car was totaled but Berry was able to extricate himself. Luckily Willie was there and got him into the house by the time the police came. The rest of the night is a blur . . . thankfully.

I don’t recall who spilled the beans about the surprise birthday party they had planned. Berry? Candy? That’s what they were up to. Showing me the love again. More than that it was a time to get us all together again, celebrating the mission of the music. Drawing the family in . . . the circle. Well the circle had been broken.

Strangely it came together because we all loved Duane so much. You and Donna came back to Macon.  Sisters had been apart too long. We had shared a lifetime in the blink of an eye. That was the most amazing funeral I have even been to. It was Glory Gospel Hour, a real revival. The roster of musicians and dignitaries alone would have made you think the King had died. “Long Live the King!” 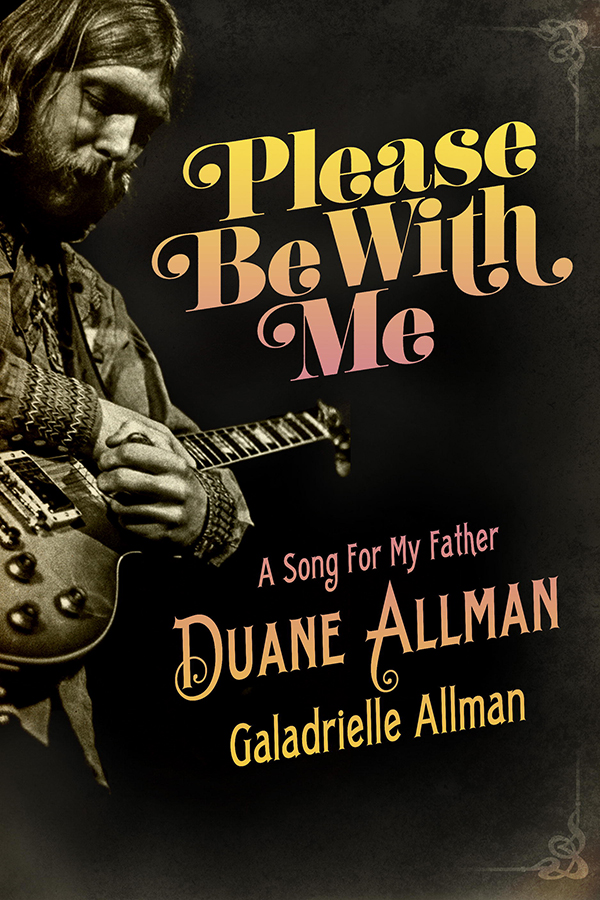 We put on our finest frocks and danced and sang and clapped and cried our eyes out. The band and guests played for all they were worth, enough to wake the dead? I think Duane would have been pleased that it was a celebration of his life. Oh but the sight of that  guitar, like a quiet sentinel on its stand . . .

My beautiful birthday bouquet was joined by a multitude of floral displays. Most impressive were the ones arranged in the  image of his Les Paul. There were flowers all over the front porch of the Big House, spilling out into the front yard for all to see. Do you know, when those blossoms began to fade and dry, we made candles. We pinned the flowers around the surface of each one, then dipped them  in the hot wax until  they were firmly attached. We gave them as Christmas gifts. Tuffy’s sister still has one.

Those Cowboys sang us through our grief with their angel harmonies . . . and lending his voice as only he could, there was Duane with us still.

I love you, Linda

A flatbed truck began to make a wide turn in the middle of the intersection ahead. For a moment, it seemed that Duane could easily make it around the back end of the truck, but when it stopped short, he was forced under the hot, spinning body of his Harley and knocked unconscious. Candy and Dixie leaped from their cars and ran to him, calling out for help. Candy banged on the doors of several houses on the street, pleading for someone to call an ambulance. She pulled the covers off the seats of her car to cover him while they waited for help to come. He had a scratch on his face, but the worst of his injuries did not show. It took forever for the ambulance to come, its siren blaring.

Friends gathered at the hospital as word spread, and they were taken to a small waiting room. As Duane was wheeled down the corridor, Berry grasped his hand and bent down to kiss his cheek.

After a couple of hours, a male nurse came in and said Duane had a broken arm and bumped his head, so he might not play guitar for a while, but he would recover.

Butch went out to get a bottle of wine to celebrate, and Gregg and Chank, one of his closest friends in Macon, went back to his apartment on Orange Terrace to hang.

In fact, the golden time  everyone had shared for the  last two and a half years was narrowing down to a single golden hour, the small window of time when it still seemed possible that Duane would live. He was losing his battle in the operating room, and after three  hours of attempts to repair the internal damage done, my father died.

When the surgeon walked into the waiting room, he was visibly shaken to find everyone in a lighthearted mood. He told them Duane hadn’t made it through the surgery, and everything stopped. No one could move or speak for a moment, and then panic set in. Pacing, crying, holding one another. Red Dog stepped outside just as Butch was returning with his wine, and the moment Butch saw the tears in his friend’s eyes, he dropped the bottle and it shattered at their feet.

Allman Brothers fans pore over photographs of the site of the accident on websites, discussing how fast he might have been going, whether or not his bike caught air on the incline of the hill, whether he hit the back of the truck or merely slipped under  it. There are video tours taken from a handheld video camera that circle around the road filming the site and describing the accident. Apocryphal stories circulated about the truck having a huge ball hanging from a crane, or a hook, or a pile of pipes, and all of these  things were said to have struck him. Was there a fire hydrant  and did he hit it? Was he on drugs or drunk? Did the truck stop before or after he was hit?

When I was in second grade, a boy taunted me by saying my father was killed by a peach truck, and that was why the band’s next record was called Eat a Peach. I didn’t know if it was true or not, but I threw a pinecone at him hard enough to make his forehead bleed.

Of course it wasn’t true. The whole scene is dissected at great length, to what end?

My father was killed in an accident, a meaningless, blameless moment that could never be changed. What else is there to know?

At Gregory’s house, I had been treading lightly for a week or more, easing into the slow pace of life in Savannah, enjoying being with him. His home sits beside a wide river and is surrounded by giant oak trees covered in dusty gray Spanish moss. His little dogs bound through the house barking at every distant sound from the road; otherwise  there  is sweet silence  and peace. My uncle  has lived in many houses in many towns, but this place is the first that feels like a real home. I had so little time with him, it felt wrong to me to be there with any kind of agenda, even one as personal as wanting to talk about my father, so I waited for Duane  to find his way into our talks naturally,  and in time, he did amble through. One night, we watched a brutal action movie about a dirty cop with a drug habit and afterward, while Gregory put on a pot of coffee, he said, “You know, I died the night my brother died.”

We stood in silence for a long moment before he went on. “I don’t know if I want to tell you about that. I’d hate to hurt the way you think of me.”

The thing was, I already knew the story he was hesitating to tell. I read it in a book about the band, and Red Dog had told me, too.