“I’m in the middle of the ocean,” Pitbull says when he picks up the phone. The Cuban-American MC explains that he’s partying on a boat off the coast of his hometown, Miami: “I don’t even know what kind of boat it is,” he adds. “I just know it floats and you have fun on it.” Pitbull, 33, has been having lots of fun recently, from scoring a Top 20 debut for his eighth album, Globalization, to hosting Fox’s New Year’s Eve broadcast. “I’ve been able to travel around the whole globe, educating myself,” he says. “Now I’m feeding that to you.”

Your new album includes the theme song you did for the 2014 World Cup. Are you any good at soccer? Could you play in the Cup?
Definitely not. I can hardly watch it, to be honest with you! But I think it’s an amazing business – it’s not as big in the United States, but it’s the biggest sport in the world. Something like Pitbull’s career [laughs].

You also have a new song called “Sexy Beaches.” Is that a play on words, or do you actually find beaches sexy?
Oh, I’m talking about sexy beaches. Whether it’s Key Largo or the Bahamas, there’s nothing but sexy beaches. And you don’t necessarily have to own a beach to own a beach. You can go to these spots if no one’s there and have an amazing time with your crowd. It’s like I say in the song: “I don’t bring sand to the beach/I bring the beach to the sand!”

You recently performed with Carlos Santana at the Latin Grammys. What was that like?
He’s someone who just puts out this amazing aura of positive energy. You can feel it. And he makes the guitar rap! The way it flows on the beat – he don’t have to say one word, but everyone understands. That alone goes to show you how powerful that man is.

NASA has recently taken steps toward sending people to Mars. Would you be open to partying on another planet now that you’ve done so much partying on this one?
I don’t know how much partying I’m going to do on Mars, to be honest with you. Shit, what do they have on Mars? Nothing. It’s gonna be hard to take me away from Miami – this is already another planet for me. We got water, we got oxygen, we’re good.

You’re known for wearing lots of nice suits and tuxes onstage. Ever want to just go casual and rock a T-shirt and some sweatpants?
Nah. We outgrew that phase a long time ago. You know, I don’t take myself that seriously, but women are the most powerful species that there is on this planet, and they’re always very detailed on what you wear and how clean you keep it. So that’s why I love to be sharp all the time. 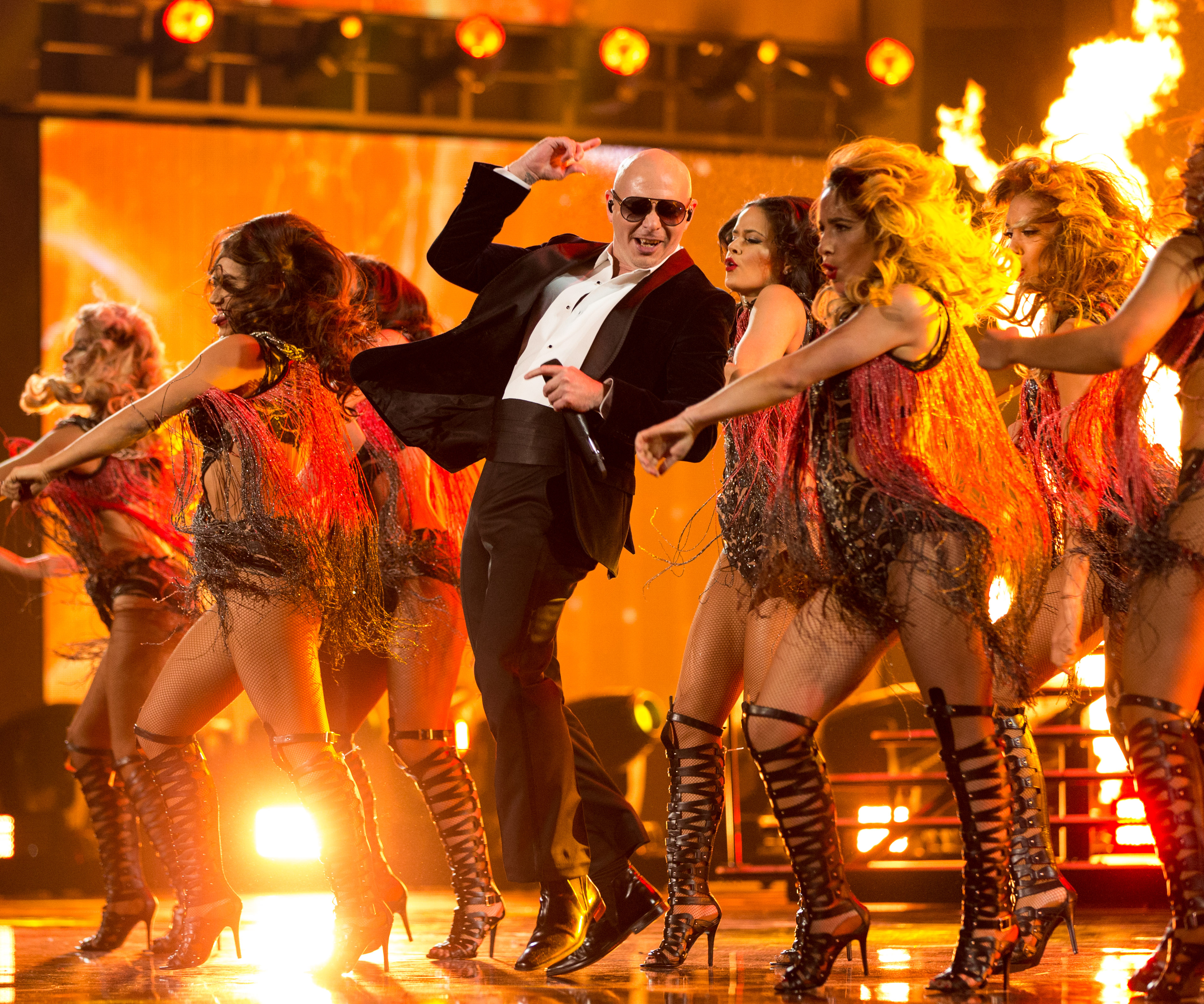 It’s been said that 2014 was the year of the booty. Do you think that was true?
As a Miami boy, every year of my life has been about the booty. There was nothing different in 2014, just ’cause Jennifer Lopez and Iggy Azalea looked gorgeous in a video. I’ve been seeing Jennifer do that for many years now. The booty is timeless.

A lot of people misheard “Timber,” your hit song with Kesha, and thought it was about the dating app Tinder. Do you ever wish you’d made a song about that instead?
Not at all. I’m an old-school guy. I don’t believe in meeting people over the Internet like that – I like to meet people in person. And I think right now the public is getting allergic to social media. It’s just too much.

Really? Have you ever taken a selfie?
Uh, no, I haven’t. But we’ve been doing selfies since Kodak days, with a Polaroid. People act like this shit is new. That shit’s old!

Oscar nominations are being announced soon. What was your favorite movie in 2014?
The James Brown movie, Get on Up. I think the guy [Chadwick Boseman] did an amazing job. He should at least be nominated. James Brown is someone I feel I can relate to. He fought, and he struggled and he hustled. And he looked at the business from a different perspective. People were going, “That musically doesn’t make sense.” He said, “I’m not asking you if it musically makes sense. Does it feel good? Are the people loving it? Yes. Then what are we talking about at the end of the day?” I feel the same way.

Speaking of movies, we’re less than a year away from the new Star Wars. Are you going to see it when it comes out?
Maybe if my kids want to check it out. I’m not a big Star Wars guy, to be honest with you. I’m just not into spaceships like that.

Right, I guess we already covered this. Space isn’t your thing. That’s cool.
Not really my thing. But hey – as a business, though, it’s amazing. I have nothing but respect for what they’ve done with that brand.

After you hosted the American Music Awards, Lorde tweeted that meeting you was like meeting the president. What was talking to Lorde like for you?
It was like meeting myself when I was 17 years old. I could see that hunger in her eyes. Nobody else is doing what she’s doing right now. I love it.

Speaking of the presidency, one writer recently said you’ll be in the White House by 2037. Do you agree?
Politics is something I try to stay away from. Am I briefed on what’s going on up there? Can I have sophisticated conversations about it? Yes. Do I think that a lot of it is bullshit? Yes.

How would life in the White House be different under President Pit, if it did happen?
It would be more like the JFK days. We would be in there partying, having a great time with the most beautiful actresses. The economy would be up, and there would be no war and we wouldn’t have to worry about climate change. So you never know.