Long before prog-rock firebrands Pink Floyd defined cerebral pop for a generation with albums like Dark Side of the Moon, Wish You Were Here and The Wall, they were Stones-y blues rockers, psychedelic space cadets, folk-rock moodscapers and heady musical mad scientists. Each captivating turn they made in their salad days, whether with original frontman Syd Barrett or the partnership of Roger Waters and David Gilmour leading the way, kept listeners’ ears piqued for what they would come up with next.

The ginormous new box set The Early Years 1965 – 1972 presents a goldmine of footage and recordings of the band before they were megastars. The collection contains 27 discs, including DVDs and Blu-rays, with unreleased outtakes, TV performances and other film clips, as well as five seven-inch singles and reproduced memorabilia. It all documents the group’s genesis through the release of their Obscured by Clouds LP, as they weirded out Dick Clark on American Bandstand, reorganized their catalogue into conceptual performances, worked with a ballet company and stormed the ruins of Pompeii.

David Gilmour Talks Pompeii Return: 'It's a Place of Ghosts'

The set comes in a giant box – about the size of a treasure chest – patterned to look like Pink Floyd’s original bus and it includes seven hours of previously unreleased audio and more than seven hours of rare footage. It costs a hefty price ($550 on the group’s website, more on Amazon), but diehard fans will justify the cost since while some of the collection’s rarities have circulated on bootleg circuits, they have never sounded or looked so good.

Here are Rolling Stone’s picks for the greatest highlights from The Early Years.

1. 1965 Recordings
The band released this sextet of songs from its first recording session last year as a limited-edition seven-inch to preserve the copyright, but it was such a small run (1,050 copies) that prices for it have skyrocketed. At this point in Pink Floyd’s career, they sounded very much in the vein of the Rolling Stones – big, bluesy pop songs, a Bo Diddley tribute, a Slim Harpo cover – and Barrett howled a bit like Mick. Their lead guitarist at the time, Rado Klose, played bouncy pentatonic solos, and they welcomed keyboardist Rick Wright’s wife, Juliette Gale, to sing background on the whimsical Waters-penned tune “Walk With Me Sydney.” Within a couple of years they’d be trawling the depths of psychedelia, making this period of time all the more curious.

2. Syd Barrett–Era Outtakes
Deeper into the same disc that contains the group’s first sessions are a number of studio recordings that Syd Barrett made with the group around the recording of their A Saucerful of Secrets LP but have been shelved until now. “In the Beechwoods” is a dramatic and jammy instrumental. “Vegetable Man,” which has been covered by the Jesus and Mary Chain and the Soft Boys, is a whimsical slice of psychedelia imagining Barrett as the title character. And “Scream Thy Last Scream” is a stilted, off-kilter rocker sung by Nick Mason as Barrett sings along in chipmunk voice.

3. Syd Barrett–Era Video Footage
Focusing on the period just after the band’s first session, the Blu-ray and DVD that accompanies the group’s earliest years presents an hour of revealing material. It includes, among other items, compelling footage of the band from 1966 hanging around Cambridgeshire and climbing rocks, as Piper at the Gates of Dawn’s “Chapter 24” plays; a clip of them recording “Nick’s Boogie”; a black-and-white newsreel on the psychedelic experience showing them playing “Interstellar Overdrive” to strobing lights; a hilarious clip of them at the beach with a mannequin as “Arnold Layne” plays; a colorful “Jugband Blues” video; and one of the weirdest American Bandstand performances of the Sixties, when they played “Apples and Oranges” a couple of days into their first-ever U.S. tour. It’s worth watching Dick Clark trying to figure them out. 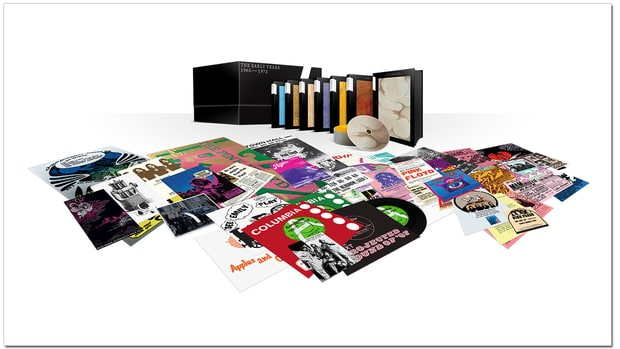 4. The Man and The Journey
Pink Floyd’s 1969 tour found them performing two suites, The Man and The Journey, which told a conceptual story of a day in the life of a person using songs from their career so far. They debuted the works at London’s Royal Albert Hall in April of that year, and the box set includes footage of them rehearsing songs from both sets: “Afternoon” (originally Relics’ “Biding My Time”), “The Beginning” (More‘s “Green Is the Colour”), “Nightmare” (More’s “Cymbaline”) and “Beset by Creatures of the Deep” (Saucerful’s “Careful With That Axe, Eugene”). A CD also presents a full audio performance of The Man and The Journey, and it all provides intimate look at a unique turning point for the group as they embraced the idea of the extended concept-driven work, which would define their next decade. (Also, it’s worth noting that another disc from this period contains alternate and unreleased tracks from the group’s More soundtrack.)

5. “Interstellar Overdrive” With Frank Zappa
While performing at a festival in Belgium in October 1969, Pink Floyd were joined by Frank Zappa for a rousing, 11-minute performance of “Interstellar Overdrive.” Roger Waters has a wild look on his face as he talks to Zappa, who has a cigarette hanging off his guitar, before they mount the weighty, unwieldy Piper at the Gates of Dawn standout. Although Rick Wright’s keyboard sometimes drowns out Zappa’s guitar, the moments where you can hear the main Mother of Invention let loose in freeform fluid jamming are transcendent.

6. Atom Heart Mother and the Zabriskie Point Outtakes
Pink Floyd’s dramatic symphonic suite “Atom Heart Mother” makes up much of the disc’s content from 1970. One CD contains two renditions of the work, including a version for BBC with choir, cello and a brass ensemble, and the Blu-ray and DVD contain several more renditions – including a stunning performance in Hyde Park with the Philip Jones Brass Ensemble and John Alldis Choir. The Blu-ray even includes the original quad mix of the entire Atom Heart Mother LP. The 1970 audio also includes more than an hour’s worth of music that was written and abandoned for Michaelangelo Antonioni’s Zabriskie Point movie. Fans know that the group plucked one unused track from that session and reworked it into Dark Side’s “Us and Them” (that same melody is also present on the previously unreleased “Looking at Map”), so it’s interesting to listen for the seeds of the next phase of their development. That disc also includes a band-only version of “Atom Heart Mother.”

7. St. Tropez
The Blu-ray for 1970 also includes a stunning set the group recorded in St. Tropez in August 1970 at the Pop Deux festival. The highlight is a typically frightening, 12-minute performance of “Careful With That Axe, Eugene,” which finds Roger Waters making animal sounds into his microphone.

8. Early “Echoes”
While the group was still promoting their Atom Heart Mother album, they began sketching out some of the music that would appear on Meddle. One such track is the epic “Echoes” – the apex of their Live at Pompeii film – and the CD that focusses on 1971 contains a seven-minute work-in-progress instrumental version of the tune, titled “Nothing Part 14.” It includes the chilling pin-prick keyboard sounds and propulsive rhythms of the later version. The same disc also features a 26-minute version of the cut they recorded for the BBC later that year.

9. Ballet and Pompeii
The Blu-ray for 1972 contains a number of French newsreels showing the group’s intriguing attempt at lending their music to ballet. Dancers pirouette and dive into upside-down positions to Floyd tracks “One of These Days” and “Careful With That Axe, Eugene” and a version of “Echoes” with vocals as a fog covers the stage and the band performs in shadows behind them. Another bizarre, beautiful clip shows the band better as well as the onstage pyro they used at the performances. Meanwhile, the same disc contains Pink Floyd’s stunning Live at Pompeii film with the audio newly remixed into 5.1 surround sound, giving new depths to the stark visuals.

10. Pink Floyd’s Bits and Bobs
Although most of the box set is arranged chronologically and logically, it also includes a bonus collection of works stretching from 1967 through 1974. The CD features two separate BBC sessions from 1967, including an early version of Roger Waters’ “Set the Controls for the Heart of the Sun” and performances of “Vegetable Man” and “Scream Thy Last Scream.” There’s also an improvisation, dubbed “Moonhead,” that the group performed in 1969 as the BBC broadcast the first moon landing, and a brilliant performance of “Echoes” at Wembley in 1974. Meanwhile, one of the Blu-rays in this section features an alternate music video for “Arnold Layne,” showing the band playfully fighting, as well as performances from throughout the years, and the other contains the full feature films More and La Vallée, which the band had scored.

11. The Memorabilia
The amount of attention detail poured into this box set is remarkable. The band has reproduced concert programs, posters, tickets, articles and more from each year of its formation. Moreover, the seven-inches – which include “Arnold Layne,” “See Emily Play” and “Apples and Oranges,” among others – contain faithfully reproduced artwork. This is the collection Pink Floyd fans have been waiting for.