The first sound the audience heard off Phoenix’s Bankrupt! was a deep, disquieting synth pulse that grew flecked with fairy dust, only to fade out just as it revved up. Last night at Brooklyn’s Music Hall of Williamsburg – for a special show that will be broadcast on Sirius XM’s Alt Nation station (channel 36) Monday, April 8th at 8 p.m. – the French dance rockers offered the intro to “Love Like A Sunset” before serving up the full version of that first song – a sprawling, expanding instrumental that imploded into a nebulous rumble that was resuscitated back into the final refrain of the Wolfgang Amadeus Phoenix cut with its teardrop guitar conclusion.

A lot has changed since Phoenix’s breakout in 2009. For one, Music Hall had been a suitable mid-size venue for the group to play after Wolfgang‘s release, but before “Lisztomania” and “1901” achieved their rightful pop ubiquity and provided Phoenix with the stadium settings that their plucky, bombastic gems cried out for. Tomorrow they’ll play Saturday Night Live (for the second time); next week they headline Coachella. But an amped-up crowd is an amped-up crowd, and this crowd was suitably amped-up as Phoenix emerged to synths that rumbled their way into Bankrupt!‘s first single, “Entertainment.” 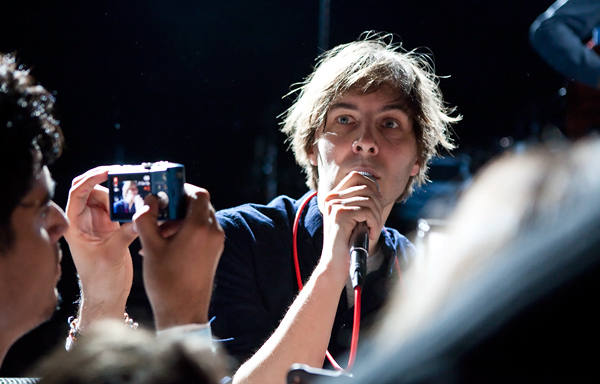 The hour-and-change set featured a healthy mix of new and old, with Thomas Mars leading the group through “Lasso” and It’s Never Been Like That‘s “Long Distance Call,” the frontman’s thin, frail vocals mustering a mighty bite for the latter’s chorus. “Lisztomania” was exactly the sing-along you’d expect it to be, its opening two-note riff tumbling out of the sound system and into a chest shuddering beat that landed with tact on the back of Mars’ demure cadences.

Though unfamiliar (at least for now), the new songs off Bankrupt! fell in nicely among the older favorites, with the band revealing a bit of a recent penchant for 90s guitar rock (though perhaps the tracks call for some adjustments when played live). “I’m Just Trying To Be Cool” opened like a shy, sheepish slow jam that twinkled its way toward a refrain with heavy power chords, while the chorus of “The Real Thing” had just the right bent of angst, descending down the fretboard like a grumpy teenager into the basement. “S.O.S.” proved to be more in the traditional Phoenix wheelhouse with a magnificent chorus of stubborn, striving synths and the repeated tagline of unfettered bummer triumphalism from Mars: “And you can’t cross the line, but you can’t stop trying!”

The band closed out with four cuts from Wolfgang Amadeus, starting with “Armistice,” which was followed by the bass bombs and fluttering synths that signaled the always-excellent “1901,” which the band must have down to a science at this point. Retiring backstage for a few minutes, Mars and guitarist Christian Mazzalai returned for a stunning, stripped-down “Countdown,” before the rest of the group joined them for a riotous rendition of “Rome” that crumbled and resurrected itself into the cherry blossom synths of “Entertainment.” The band played on as Mars hopped off the stage, plowed his way through the crowd and re-emerged atop the sound booth, where he offered heaps of thanks. As he rejoined his band, Phoenix brought the reprise to a suitably explosive finish marked by thundering down beats, giant leaps and the kind of applause that could have filled an arena.