Activision celebrated the relaunch of Guitar Hero yesterday with a bells-and-whistles event at New York City’s Best Buy Theater. And with help from Fall Out Boy‘s Pete Wentz and My Chemical Romance‘s Gerard Way, the company unveiled its new iteration of the game in the most rock-star way possible.

CEO Eric Hirshberg first unveiled the official Guitar Hero Live trailer before an industry-heavy crowd, before giving the microphone over Jamie Jackson of FreeStyleGames, the designers behind DJ Hero who are updating the franchise for the 2015 market. He offered a detailed account of the first-person perspective and redesign of the guitar-shaped controller; for the latter, Jackson noted how the necessity of the ring and pinky fingers on the old fret board design often made it impossible for users to make it past medium difficulty, jokingly referring to the issue as “danger pinky.”

To show off the game’s new capabilities, FreeStyle’s co-founder then welcomed Pete Wentz of Fall Out Boy to the stage, inviting the bassist to play along to the band’s Save Rock and Roll hit “My Songs Know What You Did in the Dark” (which will be one of the selections available on GH Live). The musician played his band’s song on Advanced, messing up a few times to the chagrin of the game’s virtual audience who react dramatically to all of the user’s successes and failures.

Hirshberg returned to the stage to present another key component of the new game: Guitar Hero TV. In the this mode, music videos spanning all genres are culled from the web for users to play either on their own or against another user. My Chemical Romance’s Gerard Way competed against Jackson on MCR’s “Na Na Na,” with Way coming out on top after a close game.

“When we were making Black Parade, we were in that haunted house — the Paramour — where we did all our writing,” Way told Rolling Stone about the original GH games. “We had a TV set up in the big room, and we had Guitar Hero there; we’d just pick it up at any time and play it. It influenced me for the music that would come out after that album because I would constant play ‘Search and Destroy’ by Iggy [Pop] and the Stooges all the time. It rekindled something for me; it’s one of the reasons why Conventional Weapons has such a protopunk sound to it.” As for Wentz’s relationship with the game, he says it comes from time spent touring with his band. “Since the beginning, we played it on the tour bus,” the bassist revealed, saying that his song of choice was Radiohead’s “Creep.” 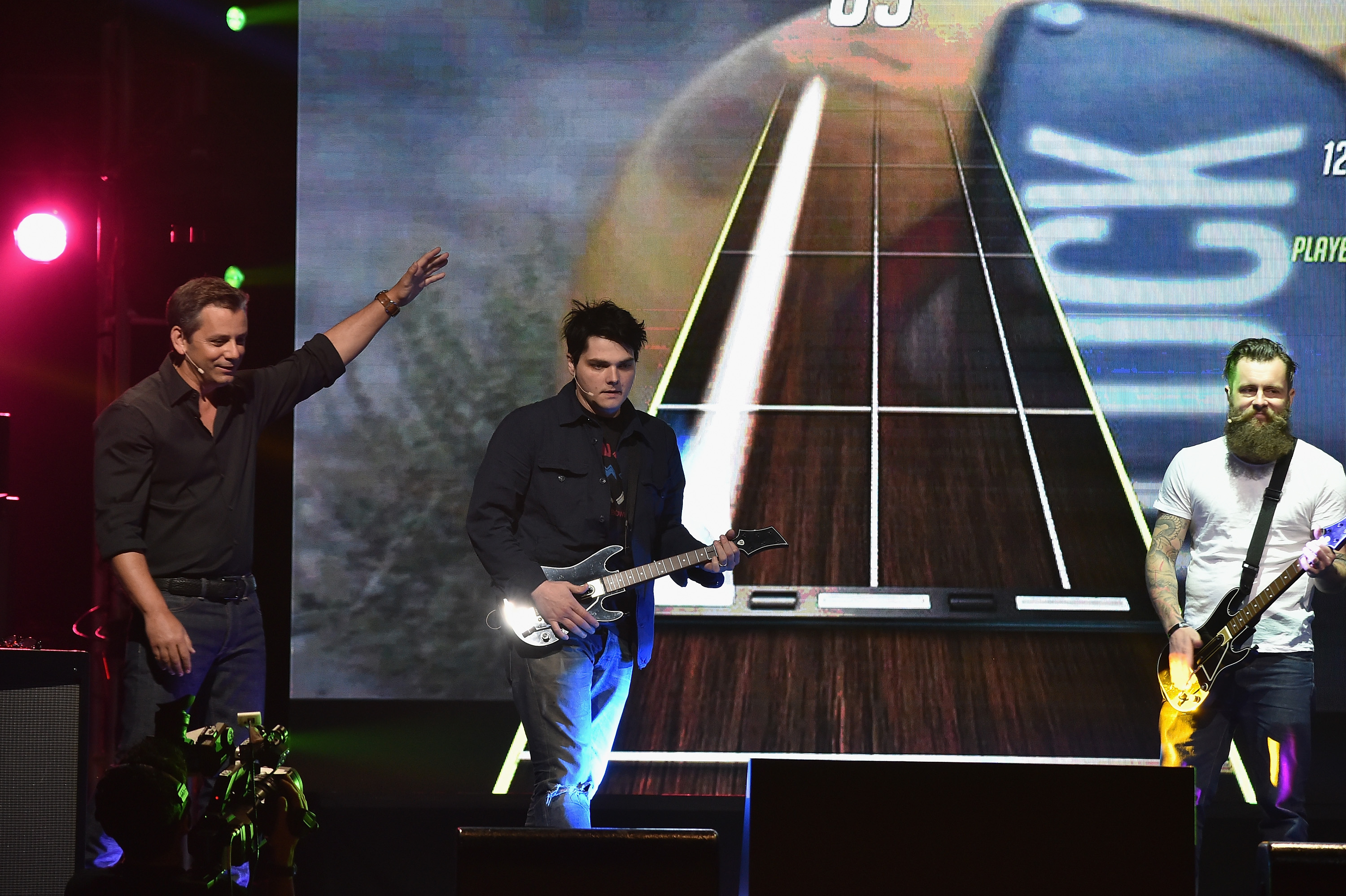 Pulling in rock stars like Wentz and Way is one way for Guitar Hero to show off just how seriously they are taking the relaunch and the notion of presenting an “authentic” recreation of what it feels like to rock a huge stadium crowd. “When I first saw the teaser video, I was like ‘This is pretty real,'” Way says. “When you’re looking at that mass of people, that is really what it feels like.”

Still, even with the support of famous friends, GH‘s biggest hurdle is to get people to care about a game that has been out of commission for five years; the last GH entry, Warriors of Rock, was released in 2010, and a steady decline in sales and interest forced Activision to officially put the franchise on ice in 2011. “The world seemed to run out of appetite for [Guitar Hero and its competitors] all at once,” Hirshberg says. “That doesn’t mean the brand is broken. People still know the brand and still have high awareness of it.”

The addition of GH TV may help the revived brand keep up with the constant ebb and flow of both he gaming and music worlds. With its constantly updating catalog of music videos, the mode will allow users to always have new music to choose from as music videos across all genres are released. This capability, however, doesn’t mean Activision is trying to build GH‘s brand towards becoming a serious competitor of other music discovery services. “To be totally candid with you, we really do try to not get confused that we are making a video game,” the CEO says. “All of our energy goes into that, so we’re not thinking about this as a Spotify competitor. Music discovery is a part of it as it relates to the game experience [but] it’s an interactive experience first and foremost. As soon as we take our eyes off that ball, that’s when it gets a little less fun — and we always want to make sure this is a fun experience.”

Guitar Hero Live will be available this fall.