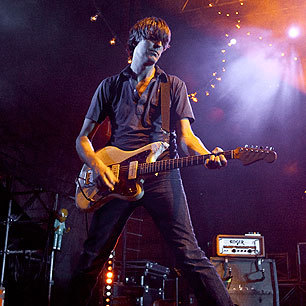 “Sing it if you know it,” Pavement‘s Stephen Malkmus told the crowd Sunday night in Brooklyn, on the Williamsburg Waterfront, as the band prepared to play “Stop Breathing.” Then he added, “I tell myself that before every song. ‘Sing it like you know it! Be the ball! Be the snare, Steve!'” He didn’t need to worry. In the group’s first New York gig since 1999, Malkmus not only remembered all the words to the old Pavement songs, he and the rest of the band brought new flair to them. The ’90s indie princes buzzed through their insanely fat songbook, 27 brilliant tunes in 90 minutes, without letting the energy level dip, lurching into each song with all their boyish enthusiasm. It was like a mix tape of the livelier moments from their ’90s shows, except more so.

All year long, on their first tour since they fell apart in 1999, Pavement have shown other bands how you do the reunion thing right: no new songs, no pompous gestures, just a celebration of the catalog that made them the great guitar band of the ’90s. The audience on Sunday night was surprisingly young, and unsurprisingly baked, but they were there to celebrate the ’90s as well. Malkmus got one of the night’s biggest cheers when he looked around at the Brooklyn waterfront and mused, “We saw a Bikini Kill show around here.”

Pavement hopped from songs everybody likes (“Gold Soundz,” “Summer Babe”) to songs hardly anybody ever notices (“No More Absolutes,” “Starlings in the Slipstream”), dipping into psychedelic jams like “Grounded” between sing-along raves like “Silence Kid” and “Unfair.” Malkmus and Scott “Spiral Stairs” Kannberg traded guitar leads in the countryfied ballad “Father to a Sister of Thought,” giving it a whole new flavor. Drummer Steve West and bassist Mark Ibold were nimbler than ever, while percussionist/hype man Bob Nastanovich banged the tambourine, sang back-up, blew harmonica, and played a mean slide whistle solo on “Fight This Generation.” He also slow-danced with a lucky lady as Malkmus crooned “We Dance.”

That song was a reminder of how much musical ground Pavement covered. They were the band who could do it all, mixing up New York noise with California stoner vibes, Euro art-punk with suburban American hardcore, yet make it all flow like rock & roll, and make it all seem like a breeze. They combined the elements of indie rock that fans were used to getting in half-assed dribbles and drabs. So “Loretta’s Scars” was the best Dinosaur Jr. song ever, just as “Zurich Is Stained” was the best Nikki Sudden song ever ? yet these were just another couple of great Pavement songs. Sunday night they blasted through “Silence Kid,” with a melody swiped from Buddy Holly (“Everyday,” to be exact), plus a throwaway guitar hook swiped from Jimi Hendrix (“Bold As Love,” to be exact), and made it crest and surge for three wildly emotional minutes of punk rock. Who else wrote songs like this? Everybody tried to. But only Pavement pulled it off. Wily bastards, these guys.

The show ended on a high note with “Range Life,” a wittily poignant ballad about the passing of youth. As he walked offstage after “Range Life,” Malkmus indulged in his only cornball rock-star gesture of the night–he tried to toss a guitar pick into the crowd. But it missed, and plopped pitifully onto the stage. Malkmus shrugged, laughed, and kept walking.