Paul McCartney may have played 24 Beatles classics and seven Wings gems in a whopping, two-and-a-half-hour set at Bonnaroo last night in Manchester, Tennessee, but that doesn’t make him an oldies act. Seeing the 70-year-old Beatle, whose voice has hardly aged a day since Please Please Me, play universally loved, time-transcending staples like “Let It Be,” “Eight Days a Week” and “Yesterday” – selections from inarguably the most influential song book in pop music history – in 2013 (and all in their original keys!) is like being able to go see Abraham Lincoln deliver the Gettysburg Address in person. It’s a privilege for anyone born in the last half century to hear this music performed live, in the moment, and with such grace, by the man who composed them. That wasn’t lost on the 80,000-or-so elated festivalgoers that congregated for Macca’s extraordinary performance on the What Stage.

As a festival, Bonnaroo has come to be defined by its diversity. For example, Malian worldbeat duo Amadou and Mariam, bookish indie stars Grizzly Bear and hip-hop legends the Wu-Tang Clan performed within hours of each other yesterday. But the main-stage headliner always plays unopposed, the idea being that entire Bonnaroo community can coalesce around a single artist. Across cultural, generational and aesthetic lines, whose catalogue could possibly be more universal than McCartney’s? The answer: Nobody’s.

And that made this the single greatest Bonnaroo headlining performance in the festival’s 12-year history, as it was moment after awesome moment of fever-pitched collective transcendence. “Paperback Writer,” “Maybe I’m Amazed,” “Band on the Run,” “Blackbird,” “Something” (played in tribute to George Harrison), “Eleanor Rigby,” “We Can Work It Out,” “Hey Jude” – to have not gotten swept up in and invigorated by the life-affirming celebration would be an outright rejection of joy. When it came to the Bonnaroo crowd, playful, more-whimsical set-list selections like “Your Mother Should Know,” “Lady Madonna,” “All Together Now” and “Ob-La-Di Ob-La-Da” – which felt like an 80,000-strong saloon sing-along – matched the festival’s quirky aesthetic, thus getting the rowdiest reactions of the set. Though an amped-up “Day Tripper” and ever savage “Helter Skelter” were more than enough to satisfy hard rock fans, a fall-of-Saigon-worthy fireworks display onstage and overhead that deafened and dazzled the crowd will inevitably be one of the most raved-about moments in the set.

It wasn’t all fish-in-barrel hits for McCartney, though, as the singer front-loaded the set with a ballsy selection of die-hard-delighting Wings deep cuts like “Junior’s Farm,” “Listen to What the Man Said” and the epic riff-fest “Let Me Roll It,” the latter of which featured an extended snippet of Jimi Hendrix’s “Foxy Lady,” (which ZZ Top would also cover in their set later on). “He was a great guy; really humble guy,” McCartney said, sharing anecdotes of his friendship with the late guitar god. A countrified cover of Lead Belly’s “The Midnight Special” was choicest gem of the lot, while a spot-on sneaky rendition of the disco-polka Band on the Run favorite “Nineteen Hundred and Eighty Five” was another particular standout.

McCartney himself also reveled in the moment as well, telling stories and bantering to individual audience members. “Free Pussy Riot!” he proclaimed in earnest before “Let It Be.” “That’s some pretty good weed I can smell,” he noted at another point, also likely in earnest.

Now the question is, how will Bonnaroo ever top this? (Cough, Led Zeppelin reunion, cough.) 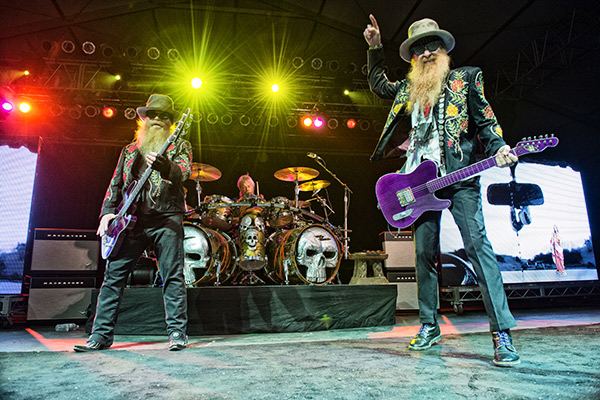 Paul McCartney wasn’t the only living legend at Bonnaroo yesterday. About the same time the Beatle and his A-plus backing band took their final bows, two-thirds of the iconically-bearded Rock and Roll Hall of Famers ZZ Top kicked off a much-anticipated late-night set at This Tent. Someone should have told the legendary red-dirt blues rocker trio that T stands for both Texas and Tennessee, as the band did little to acknowledge that Bonnaroo was anything more than just another gig. Sure, they hit their marks. Billy Gibbons and Dusty Hill wore matching sunglasses, hats and Nudie suits and busted out some two-step choreography. They ran through hits like “Sharp Dressed Man,” “Tush,” “Legs” and “La Grange” – during which the band milked a very-canned crowd participation routine for all it’s worth – for what felt like the ten-hundred-thousandth time. Although including their roadhouse-ready cover of Sam and Dave’s “I Thank You” was a nice touch, and it’s always a pleasure to hear Gibbons wail, the performance was tepid and lifeless. What could have been a rip-roaring meat-and-potatoes party set instead inspired one of the quietest crowds of the festival.

On the flip side, yesterday evening’s Which Stage Wu-Tang Clan set was anything but polished or perfunctory. Members of the unassailable hip-hop ensemble could be seen smoking blunts and kicking back Coronas (while, in an only-at-Bonnaroo juxtaposition, bookish indie stars Grizzly Bear performed in the background) and the performance was a beautiful disaster. The tracks were sloppily muddled and the reunited MCs – including RZA, Method Man, GZA and Ghostface – paused in off-spots and consistently stepped on each other’s lines as they spat East Coast Nineties classics like “Bring da Ruckus,” and “Wu-Tang Clan Ain’t Nuthing Ta F’ With.” Under most circumstances, the performance could have come off as a sloppy mess, but at Bonnaroo, at sundown on Friday, it worked, feeling like the party out in Centeroo had simply made its way to the stage. RZA had a better showing later in the night, when he gave encore performances of “C.R.E.A.M” and the late ODB’s “Shimmy Shimmy Ya,” while hosting a hip-hop Superjam boasting guests like DJ Jazzy Jeff, Solange, Schoolboy Q and the Neptunes’ Chad Hugo, backed by formidable Boston funk ensemble Lettuce. With the band locking down a tight groove and gussying up the tracks with live dynamics, the Wu material packed more punch the second time around. Redman joined at the set’s end, to spit his now-20-year-old single “Tonight’s Da Night.” 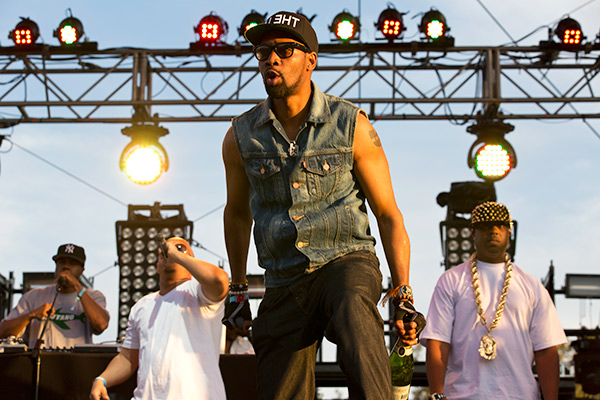 While Wu-Tang’s showing had a whiff of latter-career cash grabbiness, hungry artists on the festival’s undercard took to the tent stages with determination earlier in the afternoon. Niger-born guitar-god-on-the-rise Bombino and his air-tight backing band jammed out on fast-paced, repetitive gang vocals, rocking purposefully clenched game faces like a fully-commissioned hit squad. Pairing perfectly with the summery surroundings, despite their long velvety robes and white scarves, the band effortlessly whipped sun-and-sweat-drenched festivalgoers into dance-inducing hypnosis. Soon afterward, over at the Other Tent, 20-year-old English indietronica star-in-the-making Charli XCX was banging her head like Beyonce at the Superbowl, skipping across the stage scantily clad in a plaid and camouflage school-girl’s uniform, belting out razor-sharp melodies in loud, smoky bellow over a sleek, synth-pop sheen and a propulsive live drummer.

“I want to know who’s taken any drugs this weekend,” Charli polled the criminally modest-in-size crowd, to inevitable cheers. “This song’s about E, so this one’s for you,” she continued, introducing the gritty, dance-floor-ready “Take My Hand.” The tent went into full roof-raise when the singer busted into “I Love It,” the almost disgustingly catchy hit she had with Swedish electro duo Icona Pop.

If Charli XCX continues to win over crowds with her hooks and stadium-suited gestures, she could follow the path of Boston synth-pop college favorites Passion Pit, who had a breakout with their 2009 first-day tent slot, in the middle of a rainstorm. The band returned to the festival yesterday, this time to rock the What Stage, opening for Paul McCartney by de facto. “It’s such an honor to be playing on this stage,” frontman Michael Angelakos told the crowd. With mini-Jagger moves and full-on rock star confidence, Angelakos, in full hipster business casual attire, utterly owned an ocean of fresh-faced adoring festivalgoers by the chorus of his opening, “Little Secrets.” Given the singer’s piercing falsetto and soaring, high-register synth lines that can cut through marble, it’s no wonder they made the main-stage jump in just a few years.

Grizzly Bear, who also made their 2009 ‘Roo debut in a tent, moved up to the Which Stage for their late-afternoon set. Though the band’s backdrop of rising and falling lanterns has more impact at night and their moody, hyper-musical, dreamy, disjointed post-rock is tailor-made for darker confines, the band of fastidious audiophiles sounded phenomenal. With drummer Christopher Bear’s steady kick pumping straight to the chest like a heartbeat, each of the band’s patient textures and nuances came clearly through the speaker stacks. Singer Ed Droste’s silk-smooth voice – the hallmark of the band’s sound – crested over the crowd like a lava trickle, yielding rare moments of pin-drop attentiveness, even in the back of the expansive field.

The day was just starting to cool off when Bonnaroo vets Wilco hit the giant What Stage, with highlights including a Mermaid Avenue double-shot: Jeff Tweedy invited out the Calexico horn section to add a new, warmer dimension to “California Stars” before the charming “Hesitating Beauty,” elevated by Nels’ Cline’s blazing country picking. Wilco drew their biggest cheers when they showed off their mastery of dynamics; Nels Cline stabbed away at his instrument furiously during “Handshake Drugs” and Tweedy grinned menacingly through the percussive outbursts of “Via Chicago.” (Paul McCartney’s band was watching sidestage, and virtuoso drummer Abe Laboriel Jr. bowled over in excitement, covering his mouth in awe.) Tweedy was typically wry: “Stick around, Paul McCartney’s up next,” he said. “I’m not familiar with his work.” 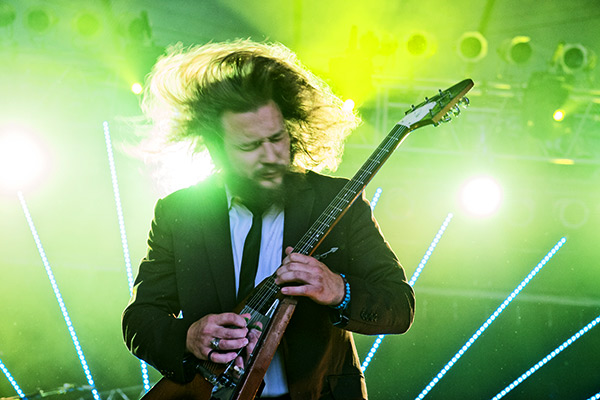 At the same time, in the smoky This Tent, Jim James, another Bonnaroo vet, performed his first solo set of new songs, which edged on funky, operatic psychedelia. “God’s Love to Deliver” was stretched out with hazy delay as James experimented with a saxophone before strapping on a hollow body, bouncing across the stage in a feedback frenzy. “Thank you for coming to this beautiful town – this fantasy universe we’ve built together,” he said. “It’s good to be back on the farm.” He then launched into the only My Morning Jacket song of the set, the gorgeous “Wonderful.” Fans went nuts as James sang: “I’m going where there ain’t no police / I’m going where there ain’t no disease.” But this is Bonnaroo: don’t take the last line too literally.

Animal Collective are the Bonnaroo redemption story of the year. After a disappointing showing with a 2009 mid-afternoon Which Stage set – where, in near-hundred-degree heat, daylight sapped the neo-electro-folk stalwarts’ rave-ready production of any impact – the band returned last night, bringing the party with a 2 a.m. This Tent slot. They split the set between fractured EDM-leaning cuts from their latest, Centipede Hz, and a mix of fan favorites like “My Girls” and “The Purple Bottle.” Here, the band was fully in its element, flying the freak flag under a multi-colored, stage-spanning inflatable arch seemingly modeled after the Partridge Family bus. An amped-up hoard looked like it might collapse the stage barricade when the band busted into “Peacebone.”

Visible from across the field, and true to his name, EDM DJ Pretty Lights offered a trippy, elaborate melange of lasers, fog and blinding strobes. At 4 a.m., with sunrise on the horizon, Pretty Lights’ stunning visuals combined with the DJ’s mid-tempo beats set atop smooth textures mashed up with Allman Brothers and Led Zeppelin samples. Some people in the crowd danced, enraptured in their own worlds, as if they weren’t moving in the midst of thousands. Others stood like statues starring wide-eyed and mouth agape at the stage, which itself looked like it was the instrument emitting the music.