A guy who can backload his concert with “Hey Jude,” “Yesterday,” “Helter Skelter,” “Get Back” and “Day Tripper” can pretty much do whatever he wants for the first two hours. For most of his first U.S. show in more than a year, Sunday night at the Scottrade Arena in St. Louis, Paul McCartney swung between crowd-pleasing Beatles favorites (he opened with “Magical Mystery Tour”), deep Wings tracks (“Mrs. Vandebilt”) and super-obscure solo experiments (“Sing the Changes,” from 2008’s duo project The Fireman). It wasn’t until after 10 p.m. on a Sunday night that he rolled out the old reliables in the third hour.

He pulled it off, too, and not just because he’s Paul McCartney, or because his longtime four-man band is so air-tight and empathetic. It’s because after 50 years on the road, he has an instinct for knowing exactly when a sold-out arena crowd gets bored and needs a shot of familiarity – at the end of the bluesy Wings stoner anthem “Let Me Roll It,” the guitar solos went on and on, finally turning into Jimi Hendrix’s “Foxey Lady.” The Fireman track is a catchy, forgotten little power-pop track, and McCartney put it nicely in context by following with the Beatles’ Help movie masterpiece “The Night Before.” 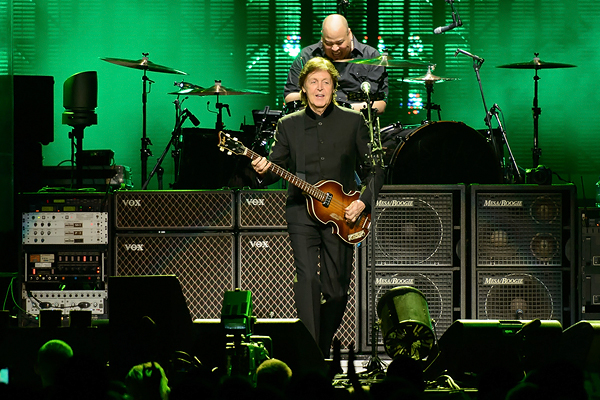 McCartney, who turned 70 in June, told stories and jokes, but true to whimsical character never delved into the elections, hurricanes or other issues of the day. His best anecdote was a well-rehearsed postscript to “Back in the USSR,” in which he spoke of playing a 2003 concert in Red Square and meeting President Vladimir Putin and other dignitaries. At one point, Sir Paul recalled, in a thick imitation-Russian accent, the defense minister told him, “First record I ever buy was ‘Love Me Do.'”

Although McCartney found it impossible to resist corny showmanship like asking how to properly pronounce “St. Louis,” dividing the crowd by gender for sing-alongs and setting off startling explosions throughout “Live and Let Die,” he and his band mostly focused on finding the perfect touch for every song. Guitarists Rusty Anderson and Brian Ray were floppy-haired bookends, and they frequently switched between bass and guitar with McCartney, who also spent plenty of time on piano, beginning with “Let It Be.” (“We’re just showing off,” he said at one point after a rush of instrument changes.) 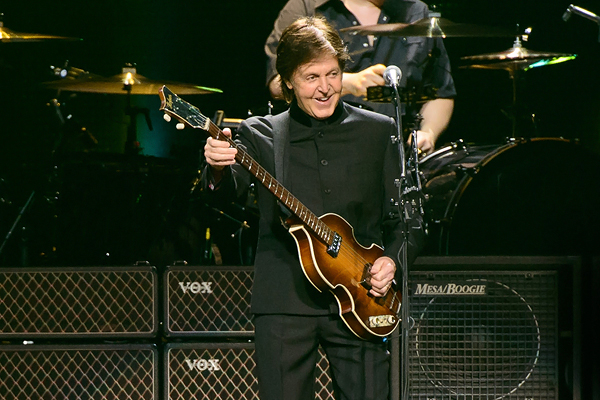 They gave “I’ve Just Seen a Face” the acoustic-country-rock treatment it deserves, shifted George Harrison’s “Something” abruptly from ukulele ballad to full-band anthem and went absolutely balls-out on several occasions, including “Birthday” (by fan request), “Band On the Run” and a surprise version of “Helter Skelter.” By show’s end, McCartney was sweaty and disheveled, even stumbling on stage during the Abbey Road finale. It was unclear whether drummer Abe Laboriel Jr. had blisters on his fingers.

“Magical Mystery Tour”
“Junior’s Farm”
“All My Loving”
“Jet”
“Drive My Car”
“Sing the Changes”
“The Night Before”
“Let Me Roll It” (including “Foxey Lady” instrumental)
“Paperback Writer”
“The Long and Winding Road”
“Nineteen Hundred and Eighty-Five”
“Maybe I’m Amazed”
“I’ve Just Seen a Face”
“And I Love Her”
“My Valentine”
“Blackbird
“Here Today”
“Dance Tonight”
“Mrs. Vandebilt”
“Eleanor Rigby”
“Something”
“Band On the Run”
“Ob-la-di, Ob-la-da”
“Back in the USSR”
“I’ve Got a Feeling”
“A Day In the Life”
“Give Peace a Chance”
“Let It Be”
“Live and Let Die”
“Hey Jude”
“Lady Madonna”
“Birthday”
“Day Tripper”
“Get Back”
“Yesterday”
“Helter Skelter”
“Golden Slumbers”
“Carry That Weight”
“The End”